An idyllic fishing holiday for this fishing couple with 3 x 100lbs catfish, the new lake record of 109lbs and plenty of good carp to 37lbs!

For the last two weeks, we’ve had the pleasure of welcoming back Alex and Loes for their fifth consecutive trip to the venue! Alex and Loes are Beausoleil super fans and fell in love with the place from day one. Alex is crazy mad for the catfish and has already banked 2 x 100 specimens. This year his goal was a specimen of 110lbs…. ambitious yes but he has the skills! This year, they had a whole two weeks to play with and they were going to take their time and really enjoy it! At the end of the day it’s a holiday and the great thing about Beausoleil is that you are in total control of how you spend your time.

Success with our catfish has never been much of a problem for Alex but our carp have proved a much tougher nut to crack. To make the most of this special session, they decided that it was time to ask for a little help.

We had a chat about what areas they wanted to focus on and they wanted me to start where I usually start, at the basics: line, knots and rigs. Loes had always taken a bit of back seat when it came to the prep work and it was great to see her get involved. Despite their knowledge of the venue, there are so many hidden features at Beausoleil that they hadn’t explored. We spent a good couple of hours discovering new spots which the fish had polished clean! I would normally supervise the rigs going out on the spots at the end of a tuition session but the guys wanted to have dinner first so we had a chat about baiting strategy and I left them to it.

After banking their first catfish at 91lbs which was the perfect start for Alex, the fishing was quiet for a couple of days so I decided to pay them a second visit on Wednesday.

Alex had chosen to leave the pole markers in that we’d dropped to mark the spots. Personally I’m not a fan of such devices and you can’t really expect pressured carp to have the confidence to drop and feed next to a pole that’s only recently appeared next to some bait. Job one was getting those out.

Next I showed Alex a simple technique to enable him to fish very accurately (within 18”) of a mark, day or night. After I’d re-sharpened all the hooks that had already been damaged on the retrieve, it was time to set some traps. 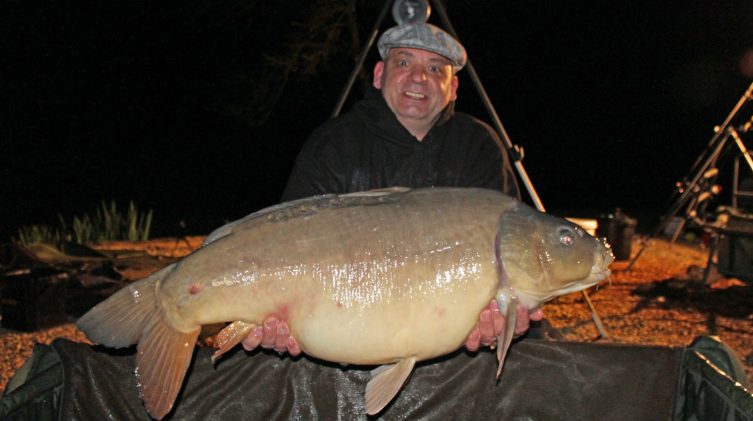 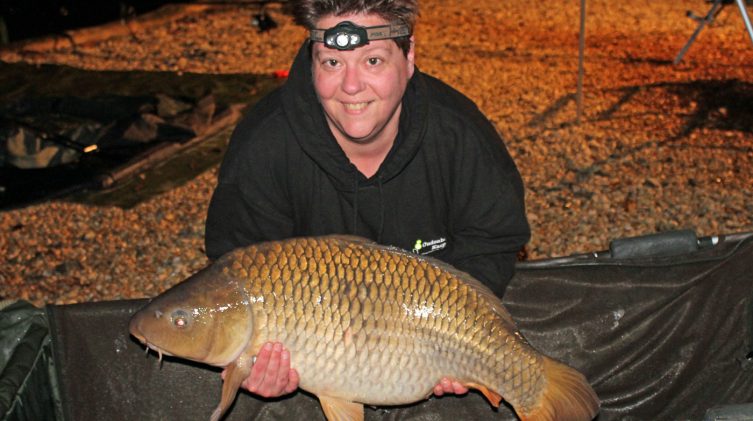 Multiple captures and new lake record in one night!

Within a few hours, the news was in: we have a carp on the bank! One of the originals of 26lbs and a good little fighter! Then it started happening: a little while later Alex banked a 51lb catfish, then a 60lbs catfish, then Loes had a 2nd carp of 26lbs and for breakfast Alex broke the lake record for catfish with a mammoth 109lbs specimen! Now that’s what I’m talking about! It was an incredible night and one they won’t forget in a hurry I’m sure.

Alex confessed that my entire approach is very different from what he normally does so it was a big leap of faith for them.

They booked a tutorial because everyone seems to catch afterwards and so far my approach hasn’t let anyone down! The biggest difference was using a semi locked up clutch on all rods to all spots for better hook holds and less or no losses! Success in carp fishing is all about doing the basics well and eliminating the reasons that prevent you from catching and that’s the focus of the session. 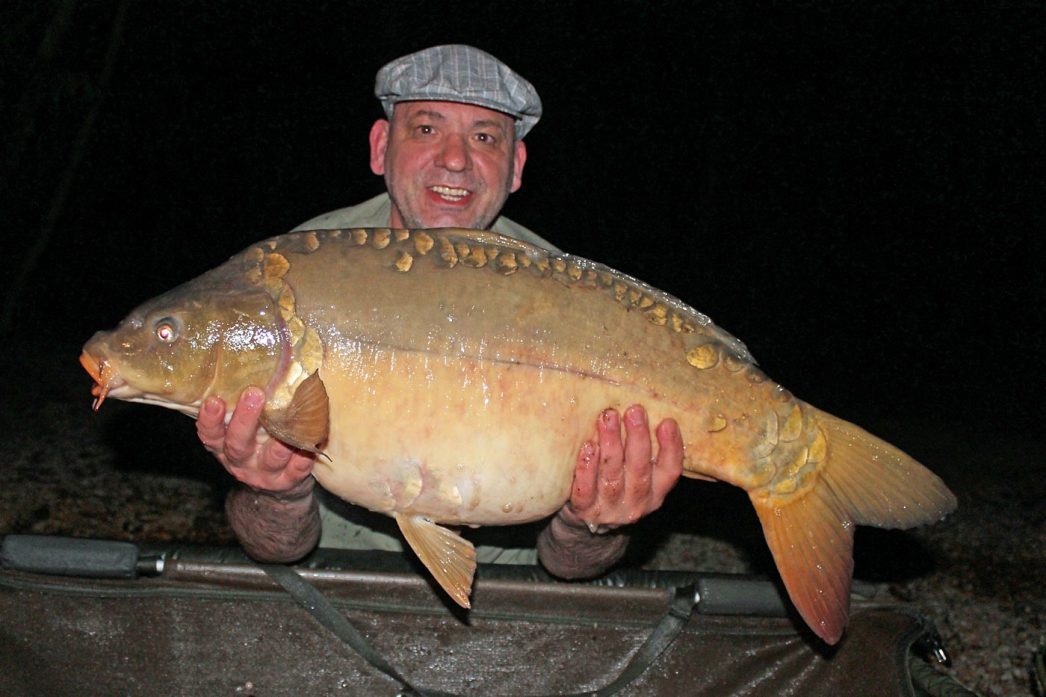 Following their most successful night’s fishing ever it was just a matter of repeating the method and then there was no stopping them. Loes continued to bank some nice mid twenties and then smashed her PB of 33lbs with a 36lbs mirror which she was delighted with. Alex’s success with the cats continued with three 100lbs plus specimens. During another memorable night Alex banked three cracking carp to 37lbs. These results are very different to their previous sessions at the same time of year when very few had been banked. They now have the skills to be successful on any water and it was fantastic to see them catching at will! 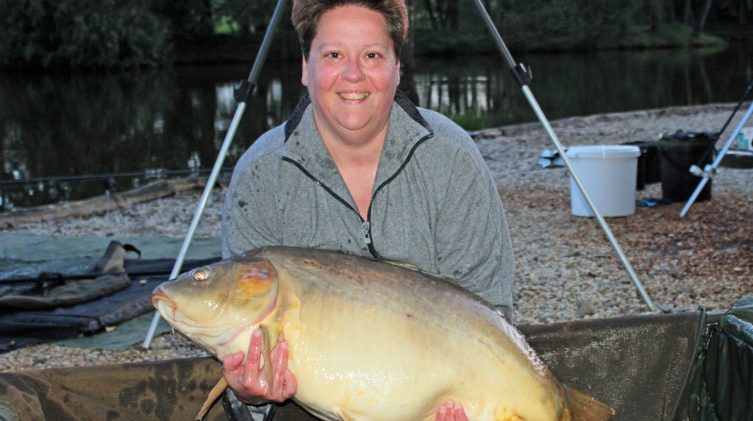 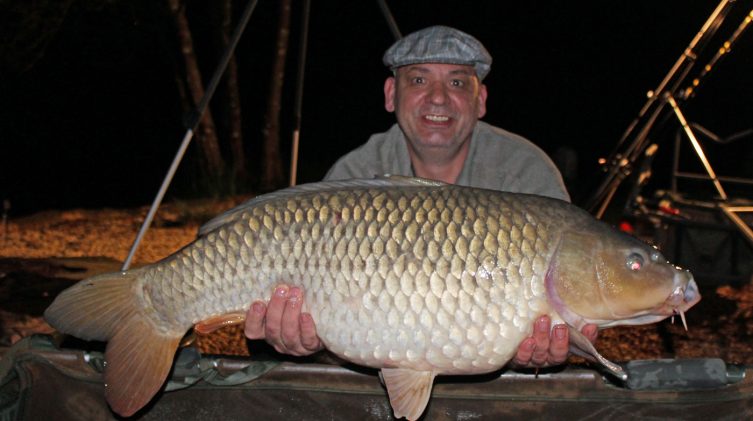 I’ve met very few anglers that are as determined and skilled catfish anglers as Alex is! This holiday was truly special as he nailed them again and again with the same deadly tactics: glugged Shrimp & Crayfish boilies over pellet. He started his holiday with a 91lbs specimen and finished with a 104lbs, his third 100lbs+ of the session. With 9 specimens over 51lbs and an average size of 85lbs, he truly is the catfish king of Beausoleil! 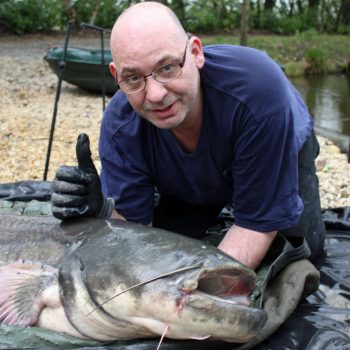 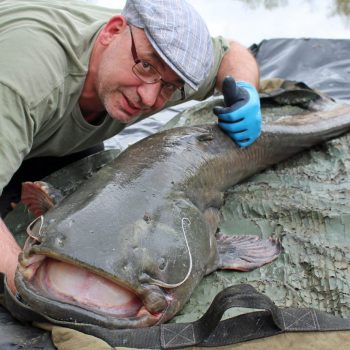 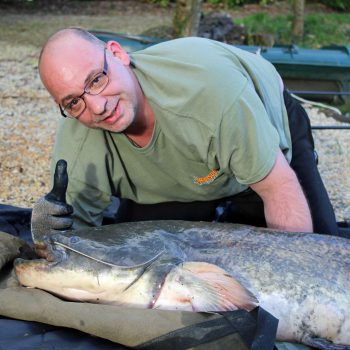 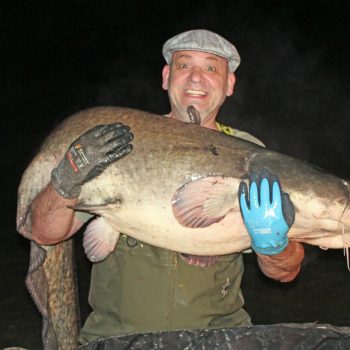 Most of the carp came on heavily pre-glugged hard Nutty Banoffee hookers fished over 20mm baits and soft boilies sticks over house pellet. All traps were set using a bait boat. The cats fell for the same method, with larger amounts of the Shrimp & Crayfish/pellet mix. Rigs were simple 2 x 20mm bottom bait for all captures tied with our carp & cat hooklink and super sharp size 4 widegape hooks. Alex and Loes also used the ever faithful Beausoleil in-line running rig and 25lb Big Game.

Session of a lifetime

It was an incredible two weeks’ fishing for this lovely couple. As any regular visitor will tell you, Beausoleil is not an easy venue and it’s not just about the fishing. It’s a stunning place to be in the spring. The red squirrels were a regular sight and on one damp night they even came across a fire salamander! It was an absolute pleasure to see them again and enjoy their little fishing paradise and we are already looking forward to welcoming them back next year!

All fish came from points ‘a’, ‘b’, ‘c’ on glugged Shrimp & Crayfish and Nutty Banoffee hardened hookers over 20mm baits and soft sticks over house pellet.

1st week a lot of rain, 2nd week warm with temps of 26 degrees

As usual everything was perfect!

This was our 5th trip. I think that tells you what we think of Beausoleil! We recommend the tutorial to everyone! Matt & Ren, thanks for everything... we'll see you next year!
Share this - 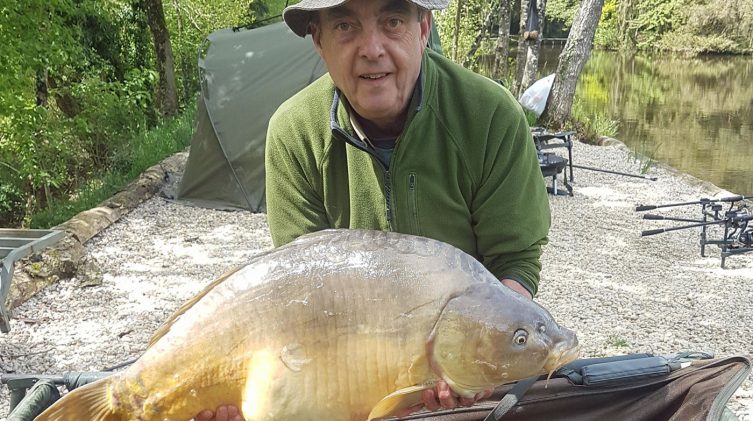