This week was a bit special as our dear friends Ritch and Perm returned for a summer session accompanied for the first time by Ritch’s wife Sarah. Sarah has been keen to take up carp fishing for a year or so now but unfortunately had major surgery on her shoulder just 3 weeks before the session and will not be able to hold a rod for many months to come. After hearing all about Beausoleil, we were keen to know her first impressions. Apparently we still don’t do a good enough job with the photos (despite our very best efforts). The venue is far more beautiful and much larger than she imagined, which was great to hear! For Ritch and Perm, it would be their 5th trip to the lake. For the last three years, they have provided invaluable help in early spring as we finalise preparations for the new season and without them the venue would not be what it is today. They were last here in mid March and arrived just a few days after we finished our lake renovation project. It’s fair to say that they were blow away by how the venue looks today. The fertile silt has fuelled the most verdant green growth of wild flowers and grasses and the lake margins are now rich with aquatic plants. To be honest, we can hardly believe the way the place looks ourselves as we were seriously questioning our sanity this winter!

The reunited Team Beau was in a buoyant mood and everyone was keen to wet a line on arrival. Everyone except Perm of course who categorically refuses to fish during daylight hours! With everyone installed, the rods were in and within a matter of hours it was my Delkim that burst into life first, signalling the first take of the session. I had made it my mission to catch a big catfish this week and had baited an open water spot accordingly with 5kg of pellet and 2kg of Blue Oyster and it was this rod that went first. A few powerful lunges told me that I was into my first cat but rather than wake the guys up after the long drive, I decided to see how the fight went and leave them to sleep some more. After hearing the commotion, team Beau assembled and my old Infinities creaked and groaned but still had the backbone to show the cat who’s boss. We decided to net him and Ritch did the honours. Up on the scales it was a new PB for me at 87lbs and I’d literally only been fishing a couple of hours! By morning it was one a piece which always settles the nerves. We then caught pretty steadily all week with only a few blank nights for us individually. 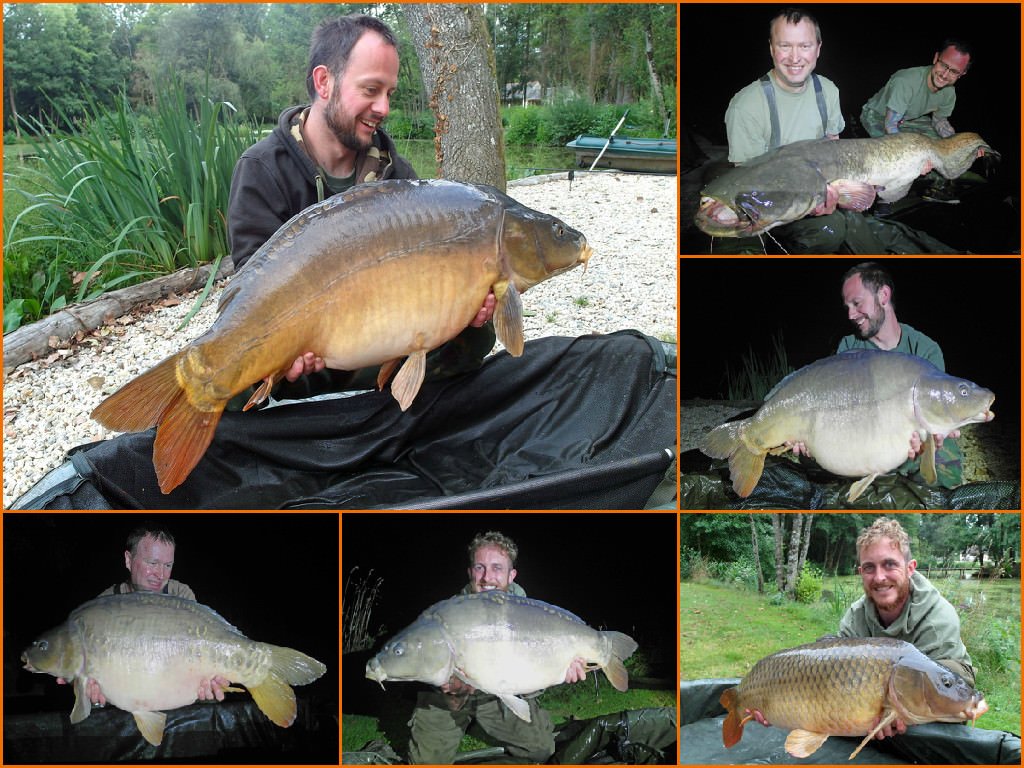 For us the highlight of the week was the way in which Ritch went about his fishing. Ritch had thought through his approach thoroughly and carried out his plan to the letter. He and Sarah spent many hours each day observing what the carp were up to as well as exploring the hidden features of the lake with a prodding stick. Multiple spots were primed with different levels of bait and rods juggled between them to keep the fish guessing. Some rigs were cast using PVA bags, others boated out and sometimes he used the bait boat. Ritch got it spot on all round and was top rod for the week with seven carp, two sturgeon and one 76lb catfish. Ritch’s catch report listed 4 x 30’s including some of our ‘A’ listers and Chestnut spawned out at 35lbs. A carp that he’d dreamed of catching every since he started fishing the venue. 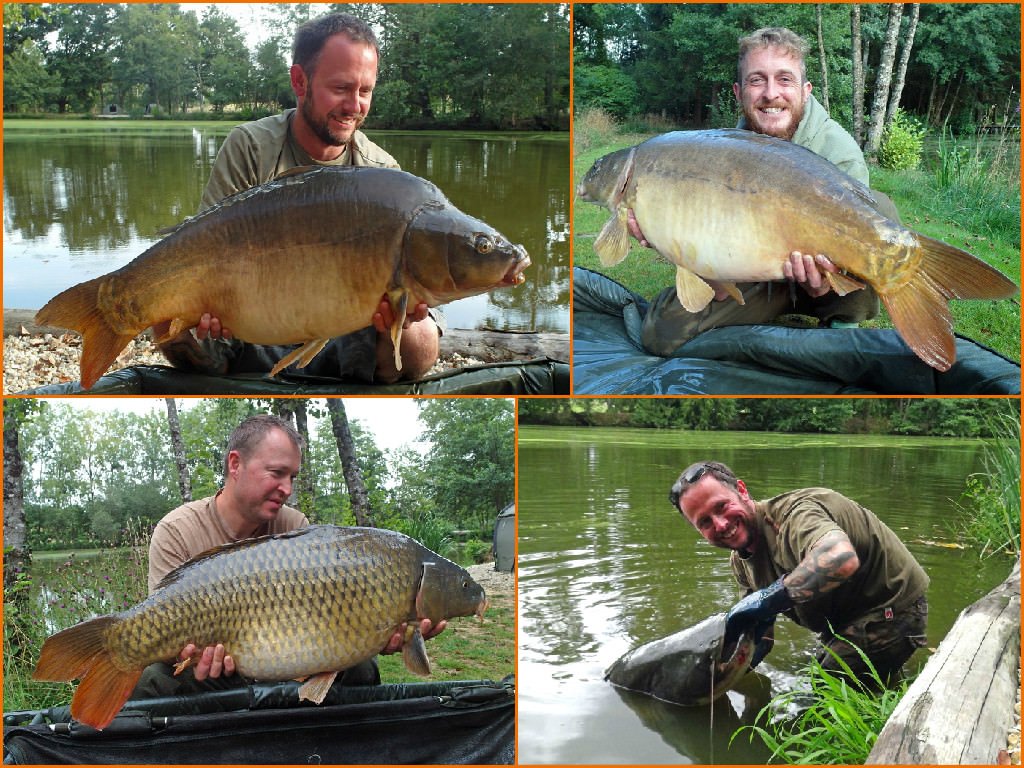 For Perm it was all about the social this week as he was heading off to another venue straight after where he’d be chasing his first 50lb carp. Perm loves to fish with small traps which is fine during the winter but once the carp were wise to his plan there was no bait to hold them and they drifted off from his corner. He still managed five carp to 31lbs 8oz. I baited heavily all week and even caught carp from open water over large beds of particle and pellet. I ended up with six carp to 30lbs and two big cats to 87lbs. I was very happy with the way I fished considering the small numbers of hours that I had available to me. A split baiting strategy definitely paid dividends as some nights I caught over small traps and others over larger beds of bait. It was a very successful week for Team Beau. Just like all our visitors, we were sorry to leave but take with us memories that will last a lifetime.

Ritch, Sarah, Perm and Matt
Dates at Beausoleil: 15th to the 22nd of August 2015
Number of anglers: 3 (mainly nights)

Best swims were the Big Double and point 'C'. Heavy baiting for cats (5kg pellet and 2kg boilie) per cat. Large spreads of boilies for the carp (30-50 baits). Blue Oyster accounted for all fish and rigs were all various lengths of the Beausoleil rig. Double baits worked best.

Perfect for the five of us.

A great week's fishing in conditions that were by no means perfect. No catfish lost due to mainline failure which is testament to the new line and terminal tackle we were trialling. We are already looking forward to our next session in March!
Share this - 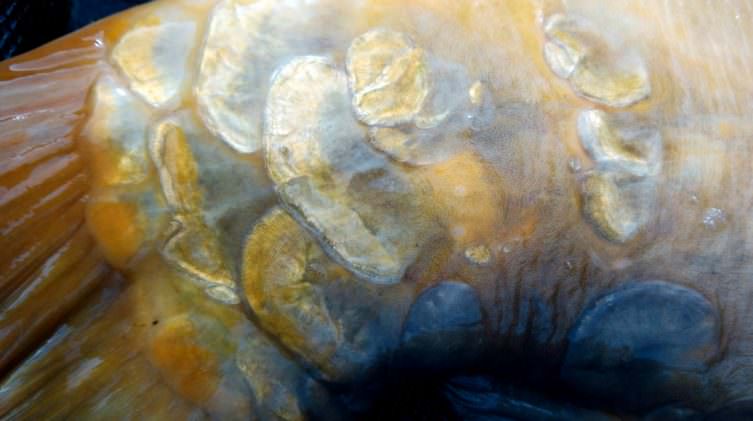 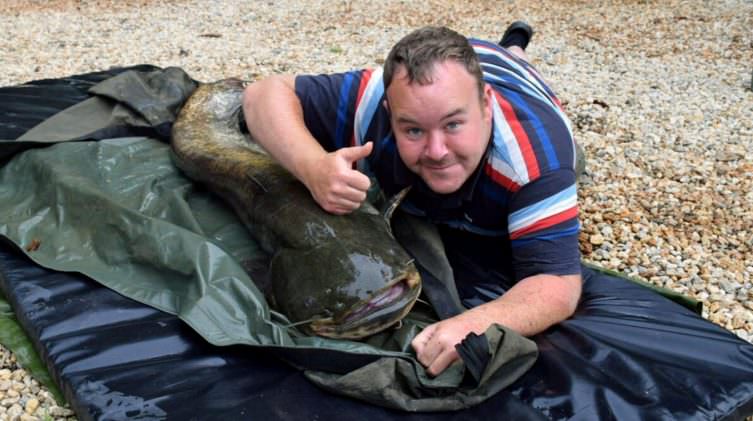