Plenty of great fishing memories for these Dutch friends with 4 x 30’s to 32lbs and cats to 104lbs … and a broken rod as a souvenir! 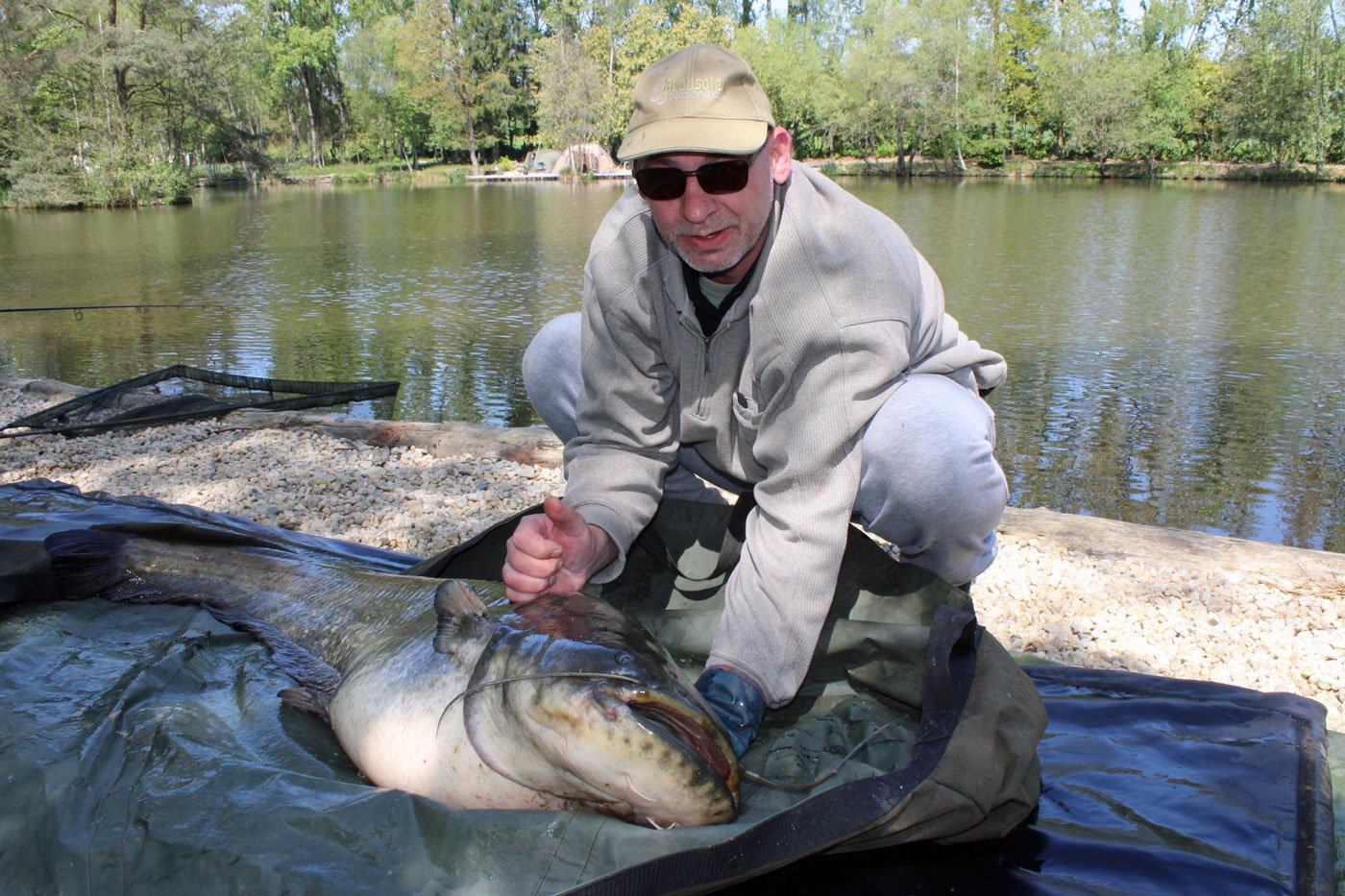 This week we welcomed back our wonderful Dutch friends Alex and Loes along with their friends Kevin and Kim. Alex is absolutely mad about his cat fishing and since discovering the venue 4 years ago, they have returned every year since. For them it is a fishing paradise and even when the fishing is tricky, they still have a great time.

As usual I called in on Tuesday to see how they were doing and unfortunately they’d been bust up a couple of times by big cats and they’d lost a few carp due to hook pulls. Kevin and Kim were both off the mark though and Kim was especially delighted with her new PB mirror at 30lbs. Kim was struggling with a shoulder injury so took a very relaxed approach to the fishing. It was nice to see Kevin bank some decent carp too. He’d struggled on his previous trip so he was owed a few. 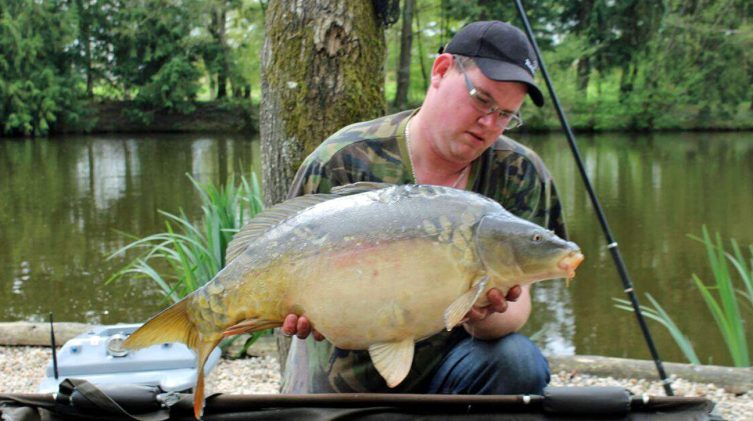 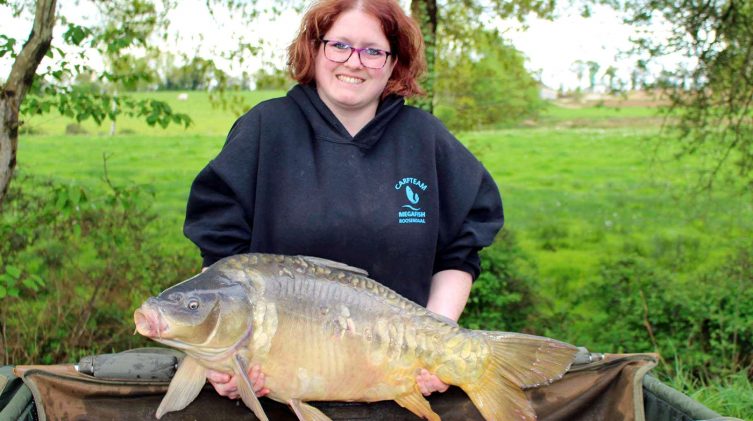 I had a look through their rigs and diagnosed the problem quickly with my jewellers’ loupe. Most of the hook points were damaged and those that had been re-sharpened weren’t done quite right. It was smiles all round as I offered to re-sharpen all their hooks for them. The change in fortune was instant with Alex banking a 104lbs cat the same afternoon! 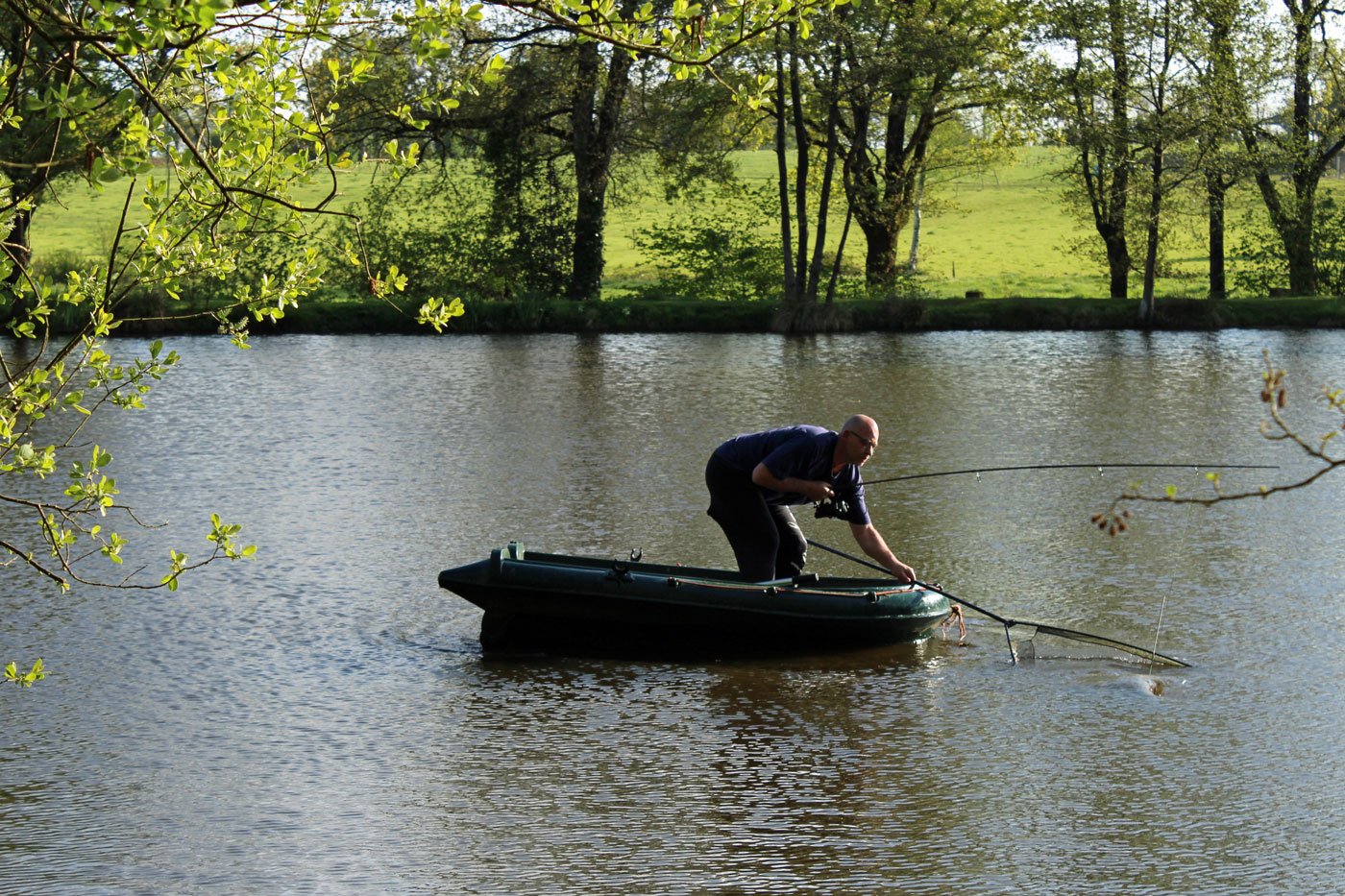 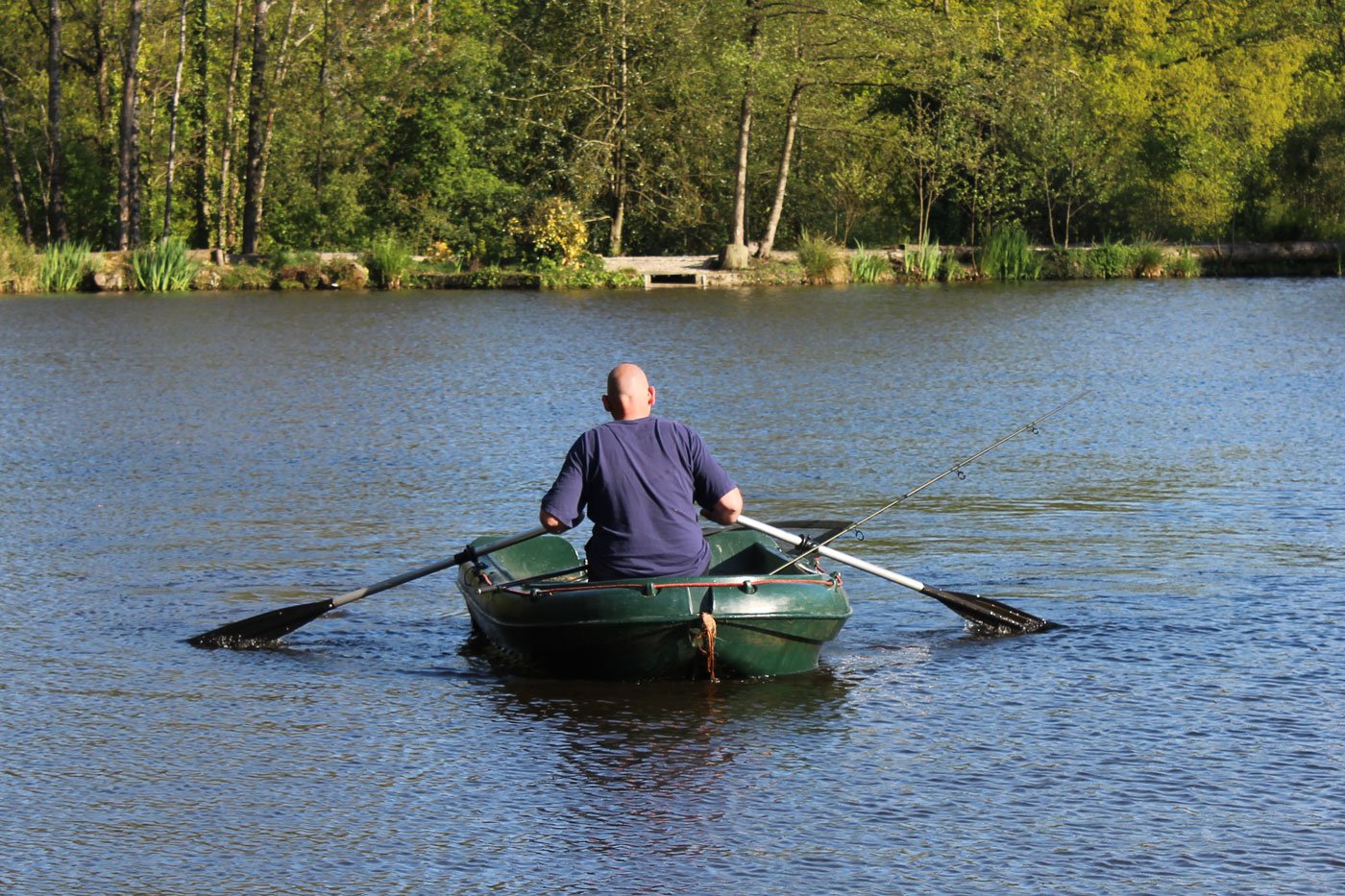 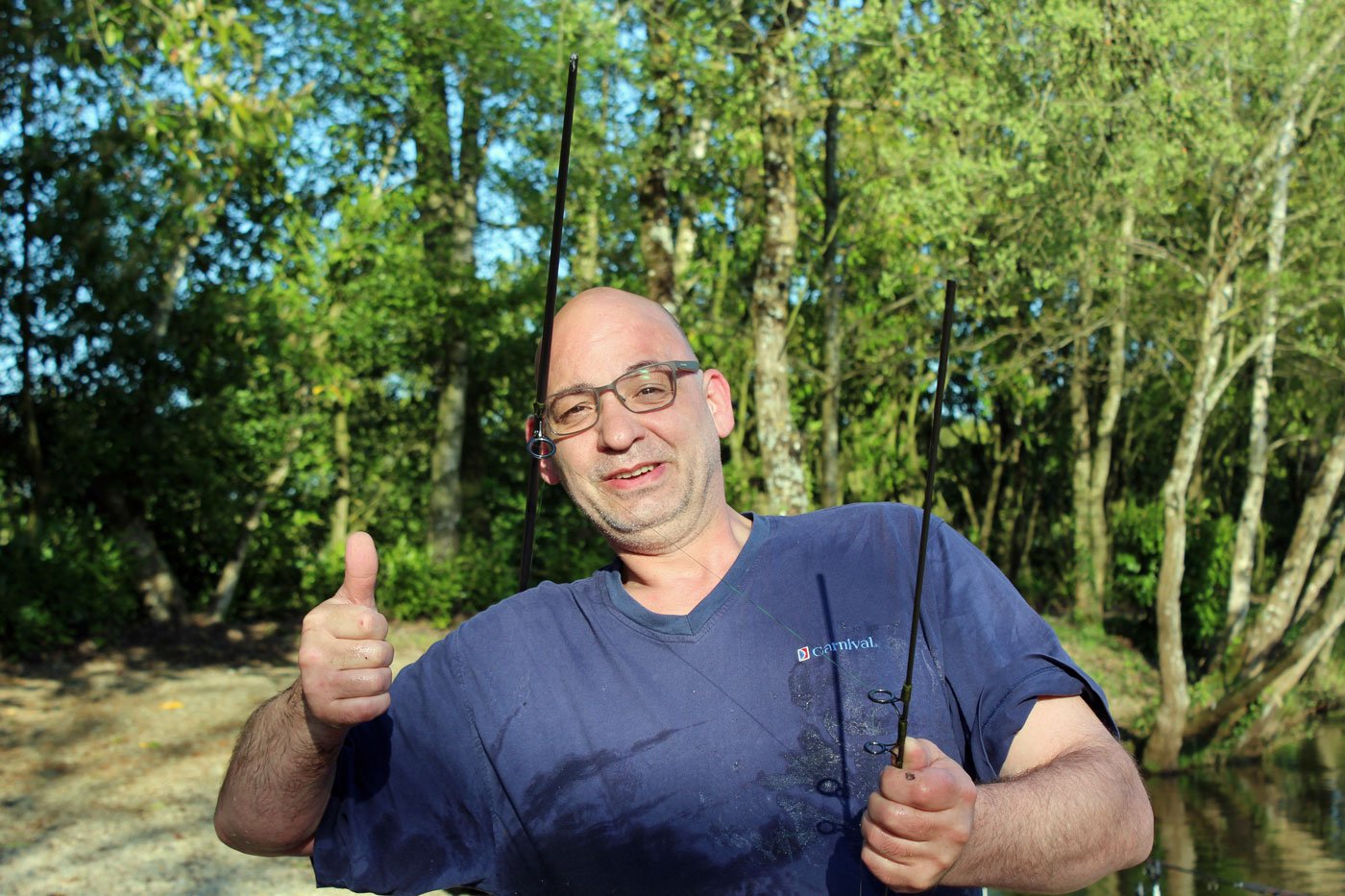 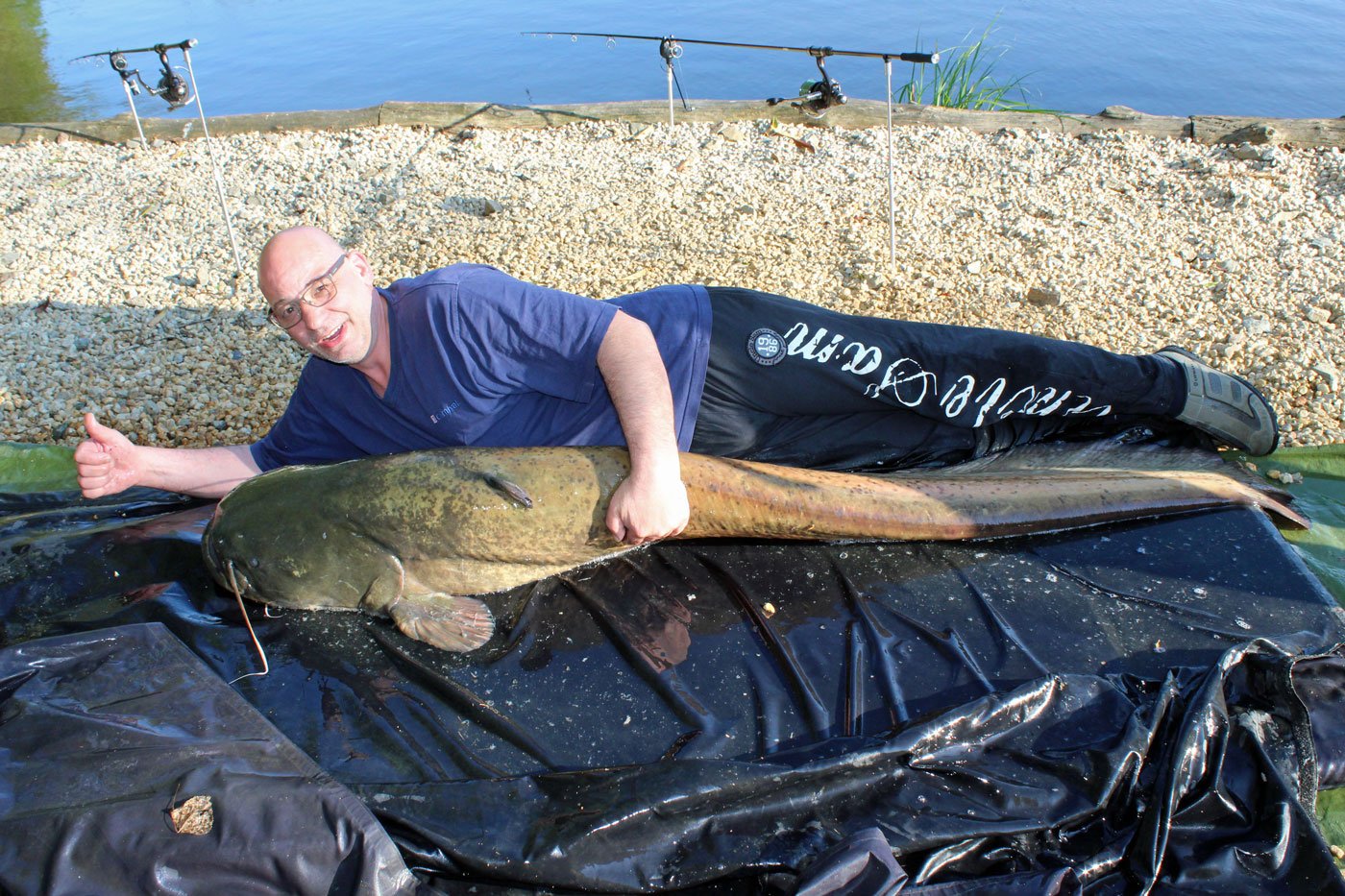 This would be Alex’s second 100lbs+ catfish from the lake making him only the 2nd angler to bank two three figure specimens. Landing it was far from straightforward though as during the fight the catfish found sanctuary in the roots of snake bank. Unable to shift it, Alex decided to take to the boat and play it from there. Now I say play it, but to be fair I think it was the catfish doing the playing as Alex got towed round the lake for another 30 minutes! At one point during the fight, the catfish plunged back under the boat, catching Alex by surprise. His rod became over compressed and shattered into three pieces! Somehow the mainline held and Alex, determined this one was coming in, managed to slide his big net under it with the remaining part of his rod while still in the boat. The hardest part came next when Alex had to row back to the Point swim towing this massive catfish behind him! 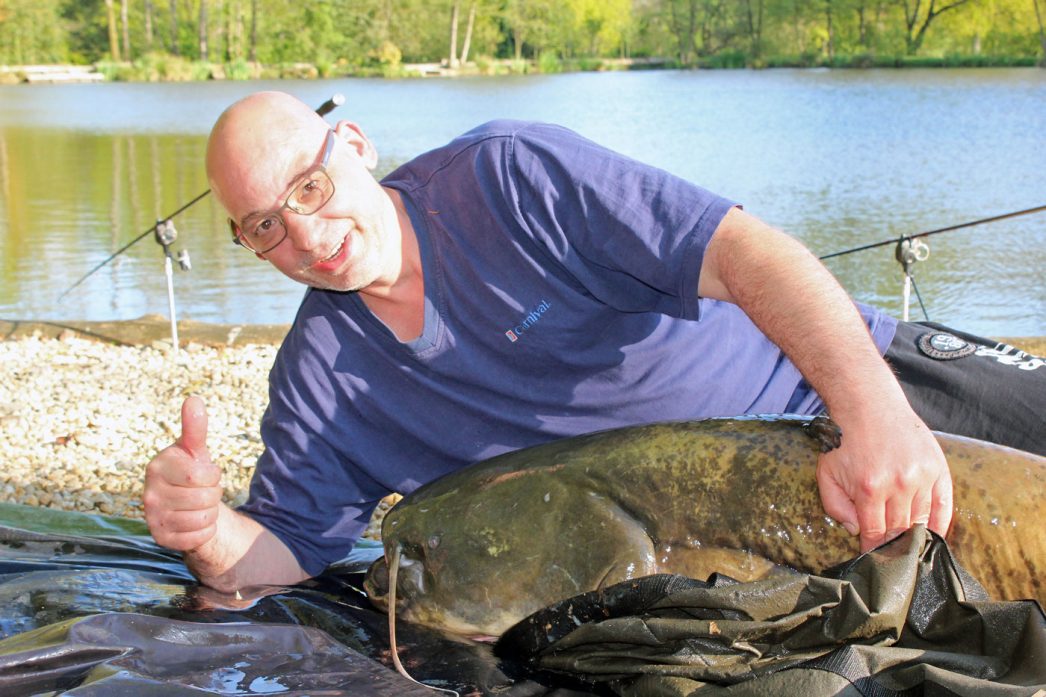 It takes a huge amount of strength, good balance and a lot of fishing talent to do this and I heartily congratulate him on this feat. I certainly would not have attempted it! These situations can go badly wrong and the safest option is to row straight across to the opposite margin while maintaining very light contact with the catfish and resume the battle from the bank.  In hindsight, he was a bit lucky to bank this one but as you can see, he was very happy he did and didn’t mind that it cost him a rod! To celebrate Alex broke out one of his big cigars that he brings especially for occasions such as these!

Alex went on to bank 4 more cats ranging from 60 to 90lbs so it was a very successful session for him. Not to be left out of the fishing fun, Loes banked a nice couple of carp too which was great to see. 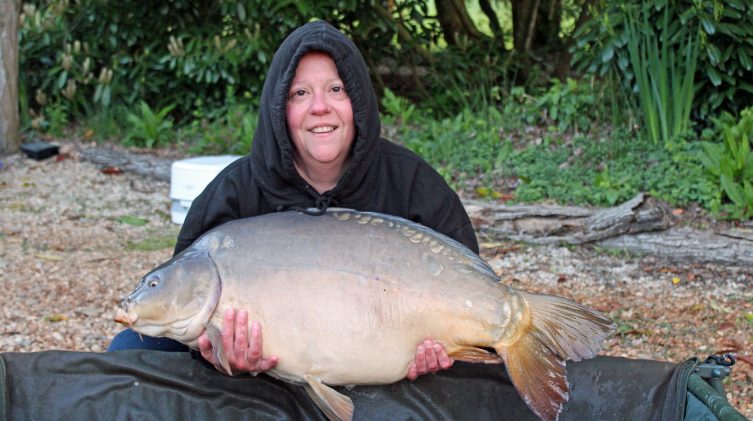 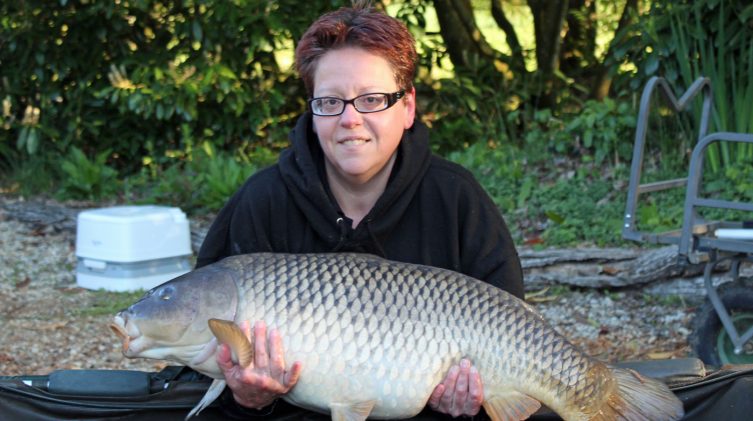 When we said our goodbyes on Saturday, I lost count of the number of times we heard Alex say: “Well, that was so much fun!”. Their enthusiasm for the venue is just fantastic and seeing them so happy makes our job so very rewarding. They are now talking about spending 2 weeks with us next year which will be fabulous if they can get the dates they need.

We mostly fished the point swims with Beausoleil baits topped off with bright popups.

A wok pan and a firehive are always welcome

Of course but we don’t want to lose our fishing holiday :)

Matt & Irene, thank you again for this holiday! Keep up the good work and we will see you next year (maybe two weeks!) Alex, Loes, Kevin and Kim.
Share this - 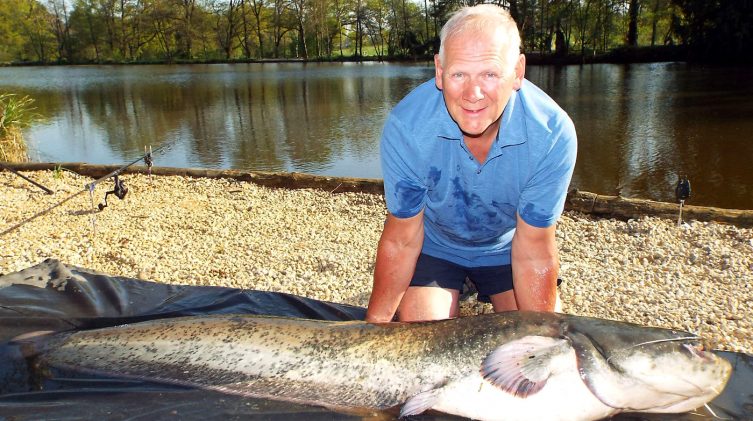 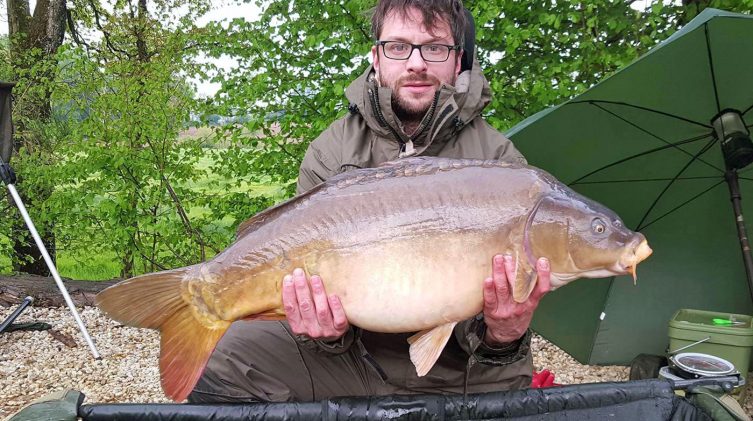