This week, we had the pleasure of welcoming back Tony, Jo and Wayne to our little slice of carp fishing heaven. For Tony, this was his 4th holiday with us, for Jo her 2nd and for Wayne his 3rd. The previous trips had been mainly in the spring. This was the first time they’d tried August and it does fish differently. 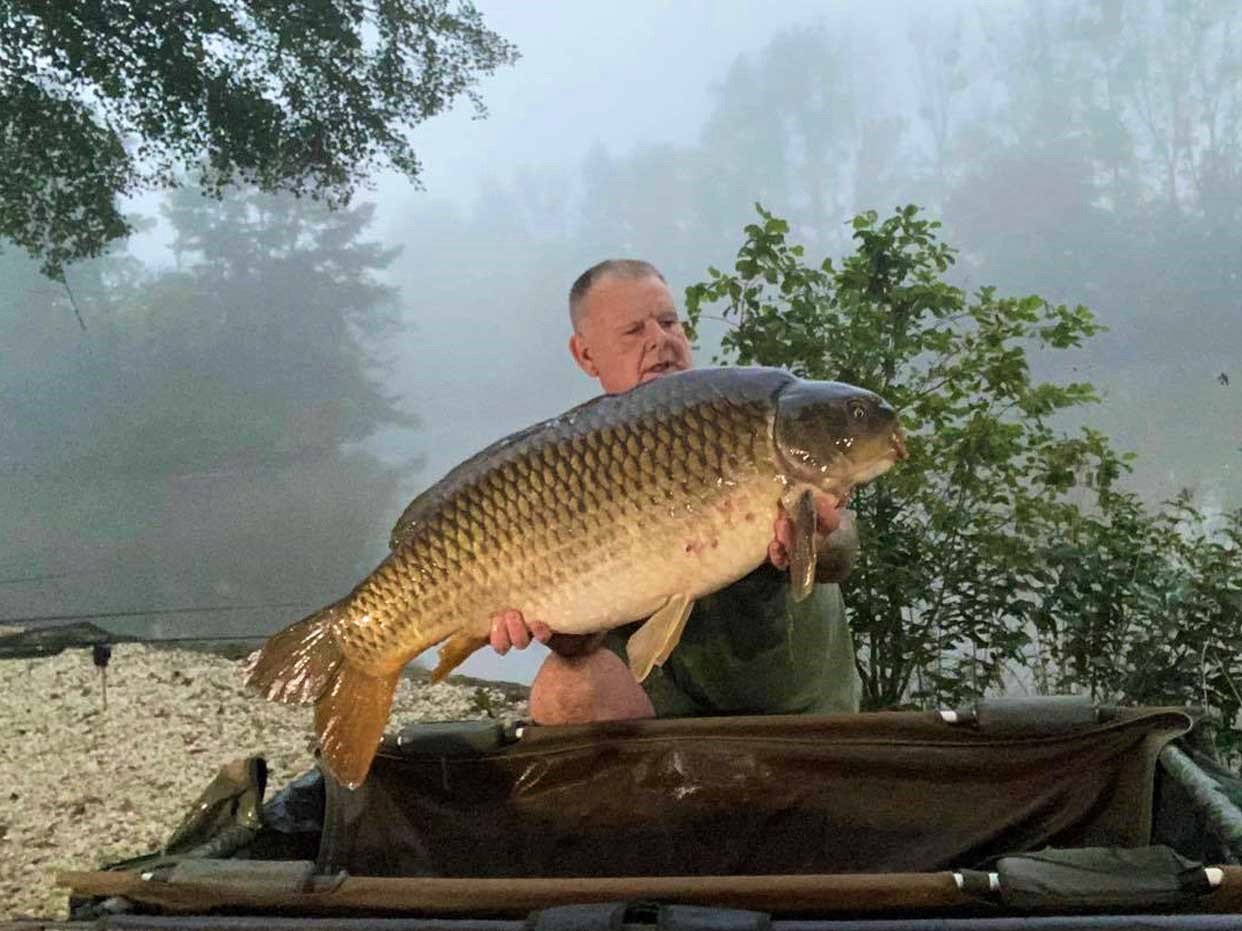 Nowadays, Tony is a French veteran and does multiple trips every year. He didn’t discover carp fishing until later in life but he was soon hooked and he’s always looking for that extra edge and to improve his skills. Tony’s wife Jo would be sitting behind a rod for the first time (set by Tony) but was really just here to relax and enjoy Fergus making the most of his new playground. Wayne loves his carp fishing and takes a relaxed approach to the whole affair.

Another brilliant week at Beausoleil, relaxing and chilling until I got a call from the lads!! Jo.

When I called round Monday, there were no captures to report but they’d both been done twice and Tony had hooked into a catfish so powerful it nearly hauled him in! 25lb Big Game is very strong but it reached its limits after being ground across some rocks and that was the end of that. So fish 3, anglers nil. We had a good review of rigs and tactics and then took to the boat, well Tony and I did. Wayne’s not keen on boats! 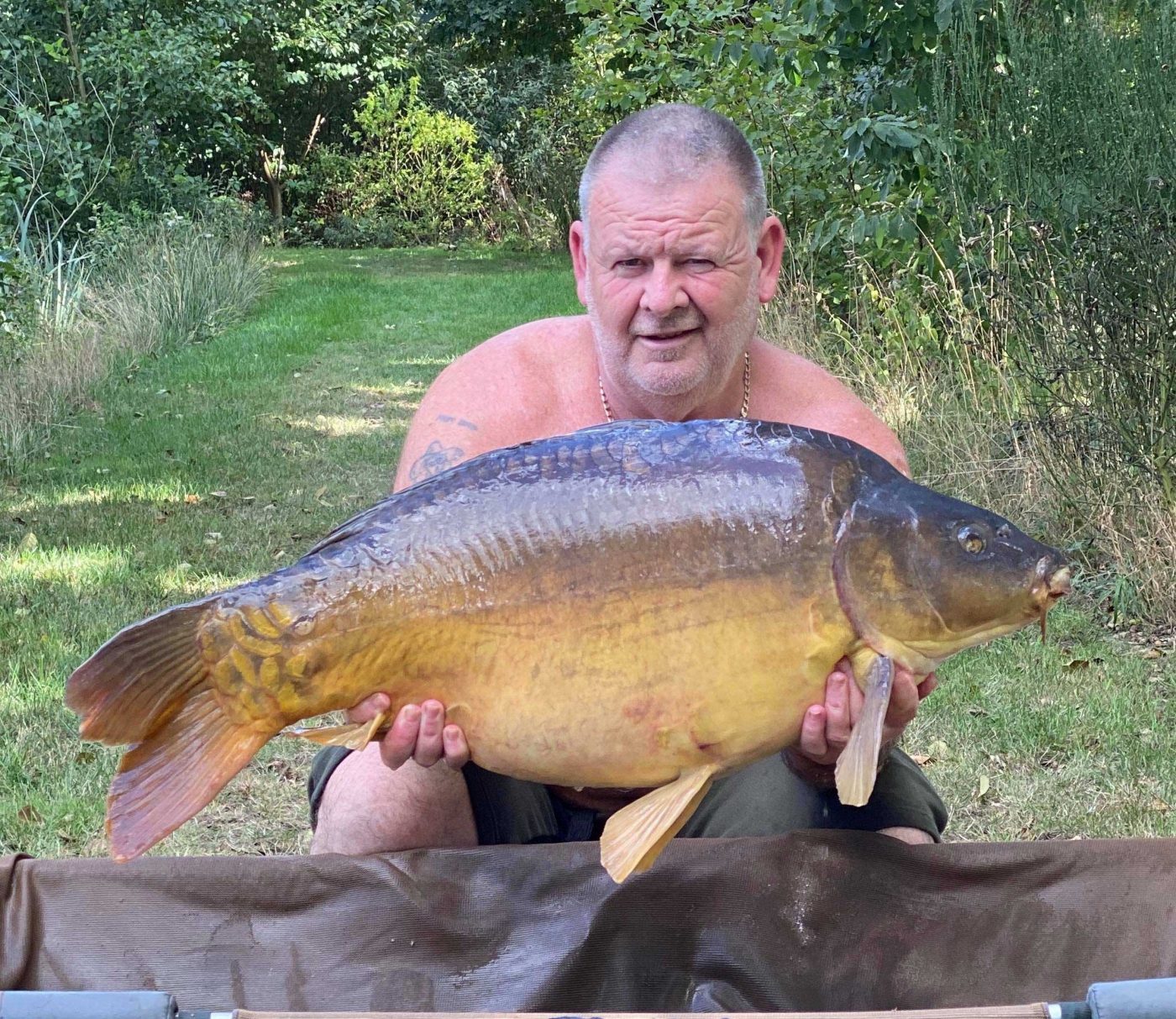 On Tuesday, they opened the score with good old Sammy. When he’s about, then a carp isn’t far behind. Sure enough, a few hours later the Dark Knight slipped up and was soon posing for the camera.

How sharp are your hooks?

By Wednesday, surprisingly, nothing else had been banked but again they’d been done on a few rods and Wayne had been smashed by another catfish and suffered a hook pull on another. The conditions weren’t bad for the end of August and from checking his bait spots, Tony knew they’d been clearing them out of every gram of bait they’d applied. 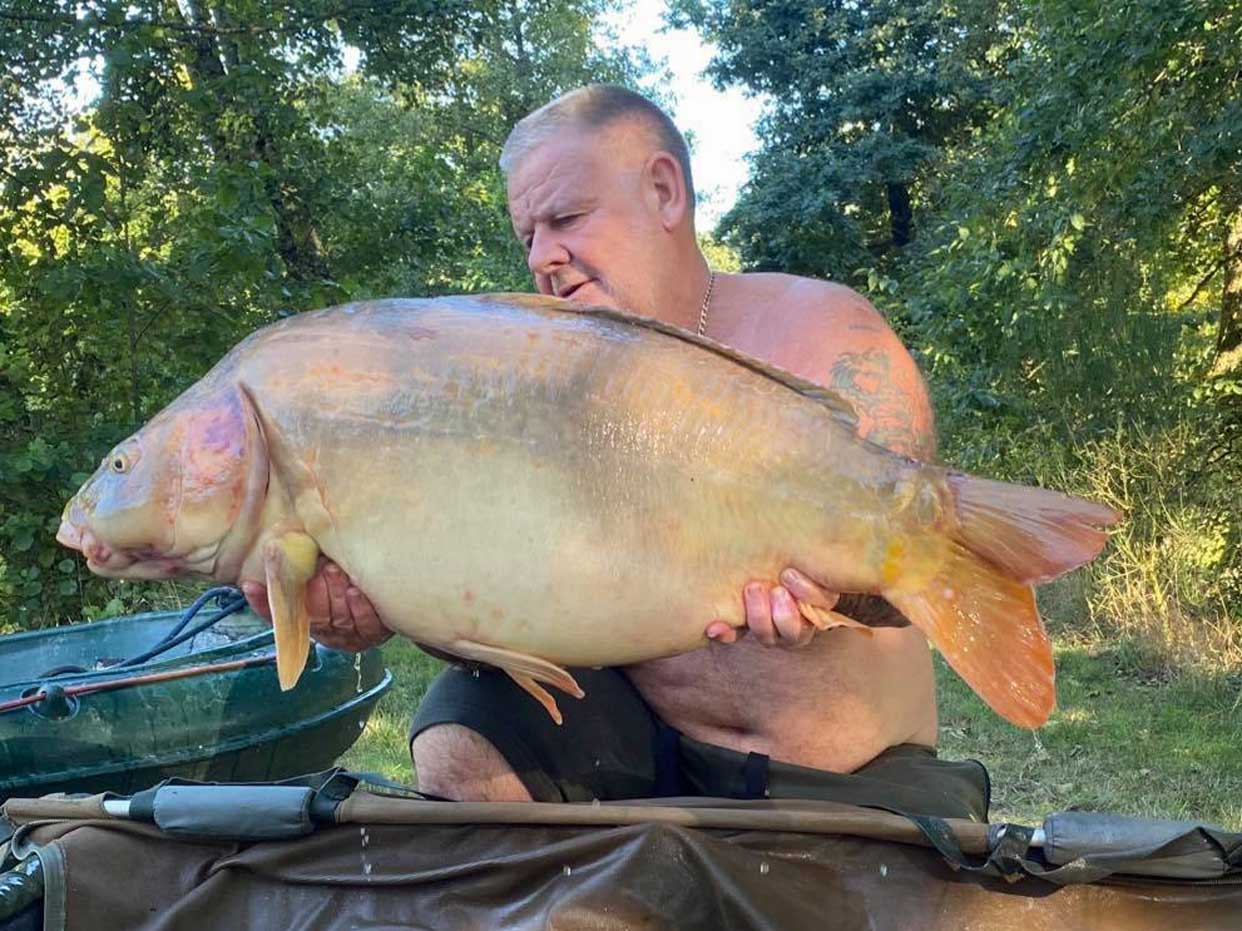 Tony was very confident about his hooks as he’s been into hook sharpening for a few years. He had 7 rigs ready for the next 24hrs and wanted to get my feedback. The first rig I picked up looked great but the others were not quite right. Some were sharp in one plane but not the other. Others were sharp but the angle was too steep making the point stubby rather than needle like. I’m not rubbishing Tony’s work here. On plenty of waters his hooks would be good enough. In the spring they’d be good enough here, but at this time of year when bites are harder to come by, they weren’t quite up to the job. Tony was grateful for the input and we set about fixing the problem and getting him back on track. 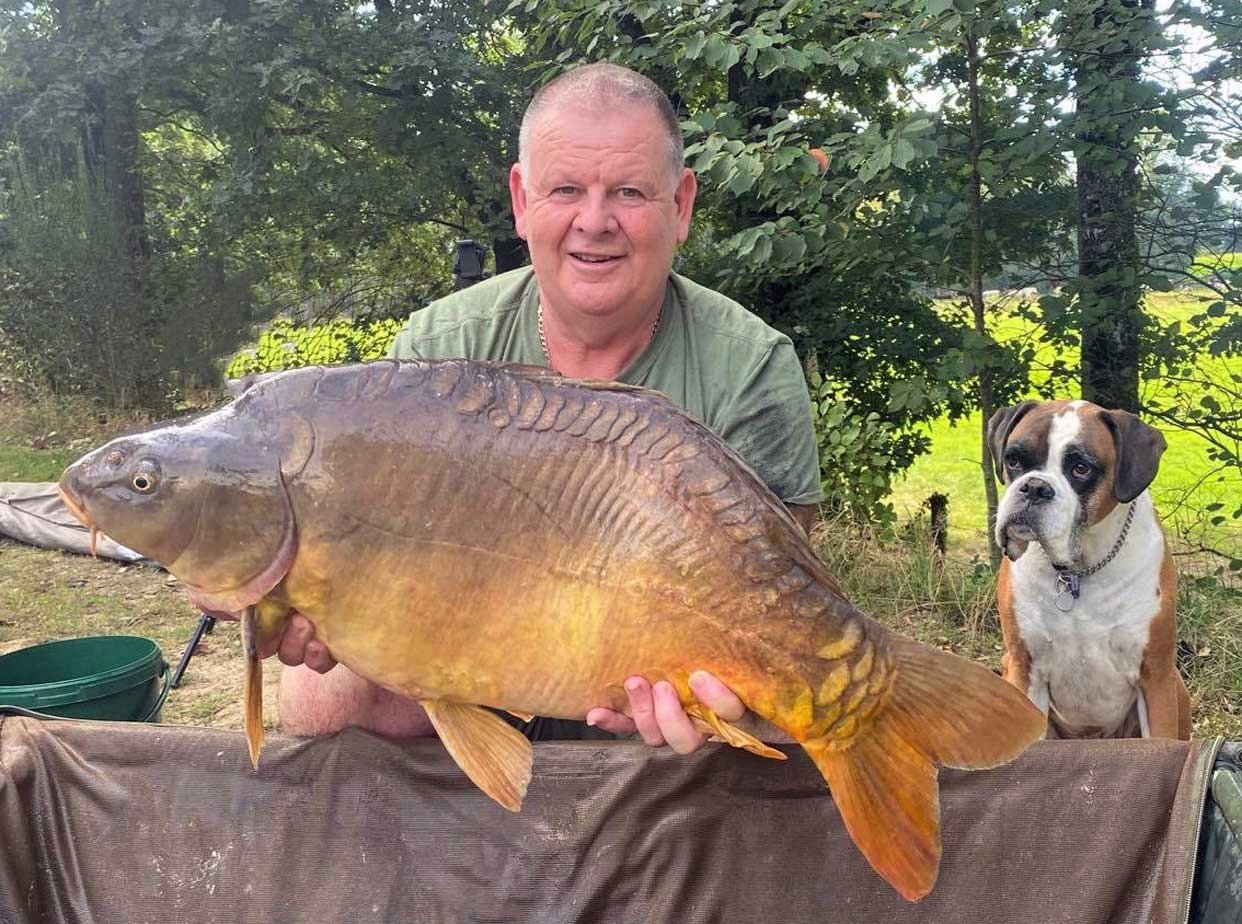 Is luck a virus?

The line between success and failure here is very, very thin. I knew why it wasn’t happening and it didn’t take long for Tony to understand it too! Between Wednesday lunchtime and Friday evening, with his hook sharpening going from strength to strength, Tony went on to catch another 8 of our finest carp. They came from the same spots, using the same rigs and the same bait. The conditions were identical. It was as though I’d injected Tony with a luck virus! (that makes more sense if you’re a Red Dwarf fan lol). Over in the Point swims, Wayne studiously applied his go to method and caught the sturgeon. Unfortunately, the one carp take he did get came at the same time…. and with rods being fished from different swims and no one close by, the carp was lost to a hook pull. Sometimes Beausoleil is a cruel teacher. 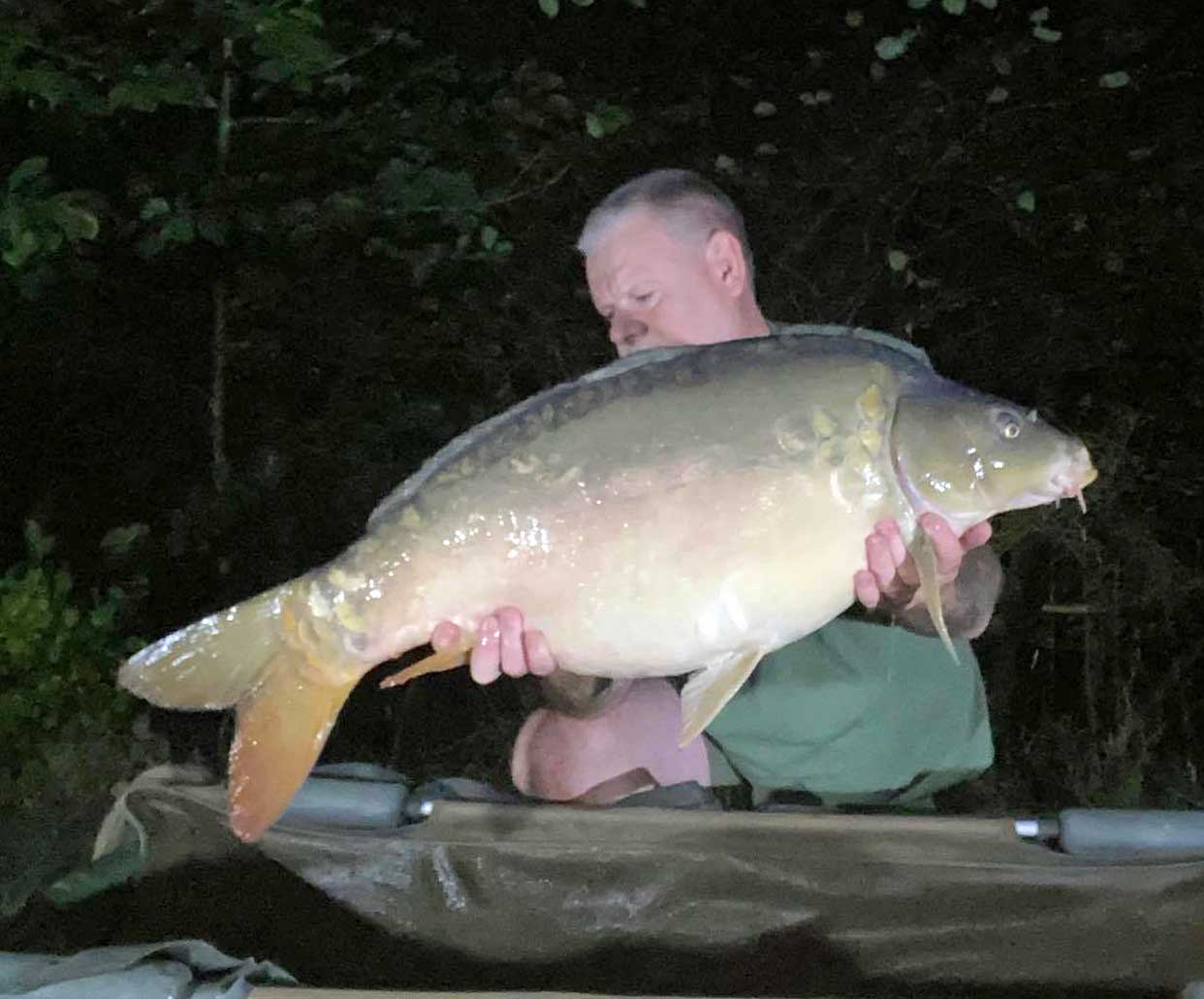 It was great to see the guys again and see Jo and Fergus having a blast. I look forward to following Tony’s next French carp fishing adventure. It will probably be a couple of years until we see them again as next year’s calendar is looking rather full but it’s great to know they are already planning a return trip. Take care guys it was a pleasure as always ?

Note: next fishing report on the 19th of September.

Tony, Jo and Wayne
Dates at Beausoleil: 29 August to 5 September
Number of anglers: 2

A lovely week yet again. Weather, fishing was great. We all enjoyed the peace and tranquility, thank you to our lovely hosts, Matt and Ren. Nothing too much trouble. We will be back. Fergus the dog loved it too !!! 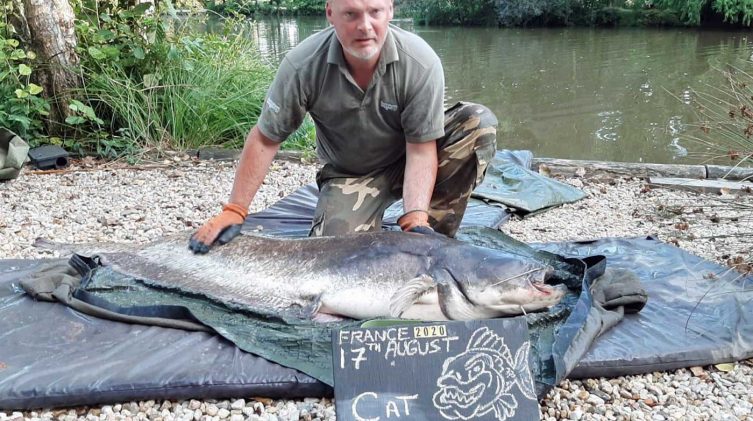 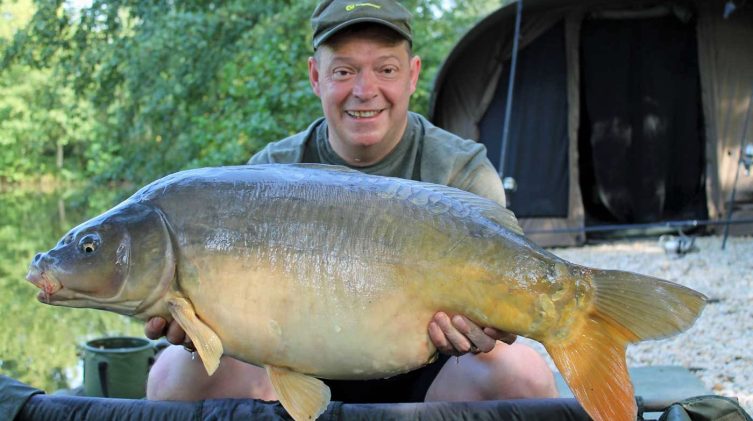