A very memorable week for this carp fishing father and son duo with a new lake record mirror and an epic 1.5hr battle with a 103lbs catfish for young Matthew!

For their second carp fishing trip to France, father and son team, Gareth and 13-year old Matthew had chosen Beausoleil. Not only were they hoping for an encounter with one of our prized fish, Gareth was keen to review his rigs, tactics and setup and had booked a tutorial for the start of their holiday.

They had a slightly shorter stay than normal as they were constrained by the ferry times coming from Ireland. They couldn’t get here till Sunday and would need to leave Friday so they really needed to make every minute count.

The focus of the tutorial was to be on the rigs as this is an area which Gareth felt was their weakest. Before I actually had a look at their setup, Gareth mentioned that he felt their rigs were too complicated and when we wound a rod in, I understood exactly why he thought that. Gareth is a chartered engineer and was trying to solve the problem of the mechanics of carp angling with a bit of this and a bit of that from various sources but in his own words, “You can’t learn engineering from YouTube and you can’t learn carp fishing from it either!”. Gareth had been a course angler from a young age just like me but sorting through the insane amount of conflicting information available on carp fishing is enough to baffle anyone!

Tying, tightening and testing knots is where I start. I still meet loads of good anglers that get this wrong. Trouble is, the fish of Beausoleil will expose any weakness in your game and smash you before you know what’s happened! Next we looked at how to create a safe setup with rig tubing and a lightly fixed inline lead. Then onto the knotless knot and hook sharpening. This is something Gareth was already familiar with but it was taking him a lot of time and we reviewed the whole approach together. Gareth was very keen that Matthew should learn to sharpen his own hooks. I have to say the engineering gene had definitely been passed from father to son as he was soon producing hooks that would catch even the trickiest of carp!

Time to get fishing

As soon as we’d got one rod ready to fish, they picked a spot and dispatched it in the bait boat. Back at base, we had plenty more prep work to do and I demonstrated another rig variant which I thought might serve them well. By late afternoon, they were ready to get going.

Later that night Matthew’s cat rod, which was fishing cat-trap style, locked up solid and an epic 1.5 hr battle began. Matthew’s very lightly built and this was going to take all the strength of the both of them to get this fish in!

Gareth wanted Matthew to do as much as he could and he did, but without dad’s help it wouldn’t have been banked. They’d simply never encountered anything that pulled so hard and kept going going and going. The next day, Gareth pointed out that if it wasn’t for the tuition session there was no way they’d have landed this fish as their standard setup would never have lasted beyond a few minutes. On the scales, they weighed the beast at 103 lbs…. not bad for your first take! 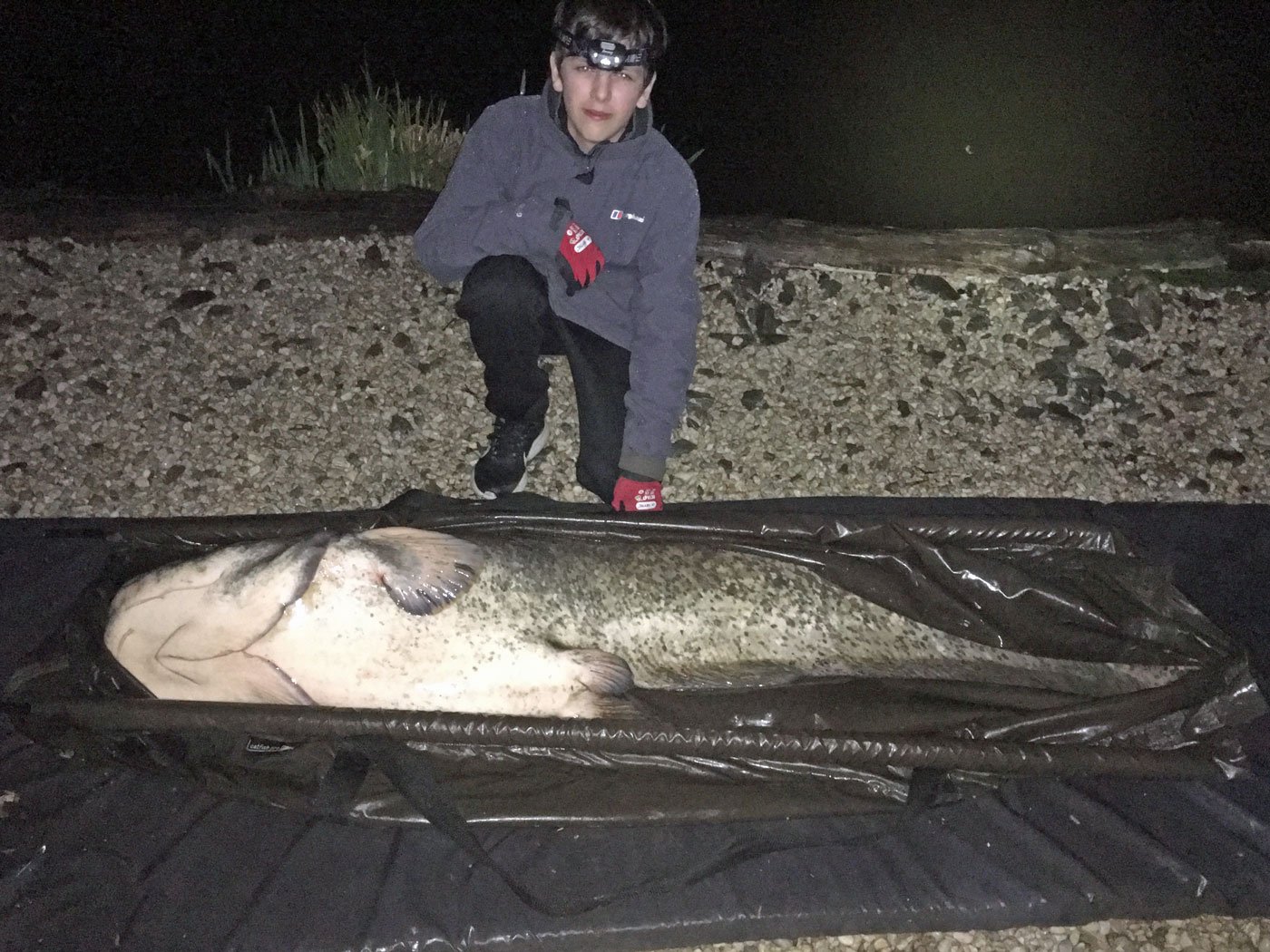 They were both in bits the next day but very, very happy. Matthew had really wanted to catch a catfish and it was one of the reasons why they’d chosen us. With that tick in the box, Gareth was keen to get back to more familiar territory…. carp!

The luck of the Irish?

The next take fell to Gareth and came from the sluice area. It began with a single beep followed by a pause and then a steady flurry, as the line tightened steadily it was game on! Gareth had now experienced one of our catfish and had banked a 50 lb mirror last year but he still wasn’t ready for the antics of our carp! 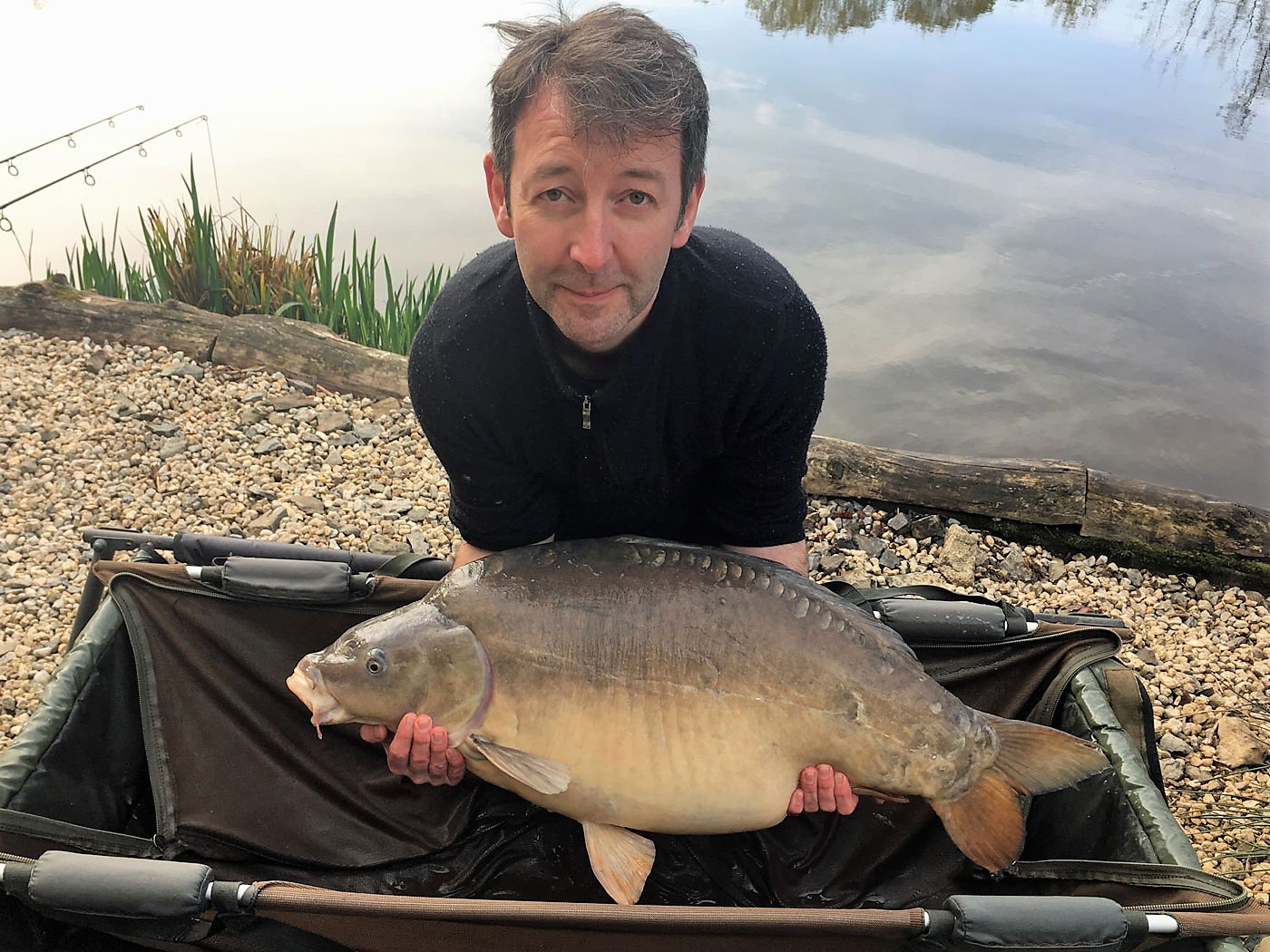 Mr. Angry was obviously in a particularly dark mood as he ran Gareth absolutely ragged all round the open water, then through point B and then round and round in point A! Not many carp can give you a 20 minute fight of your life but some of ours can. Gareth described it as “the hardest fighting carp I’ve ever hooked by miles!”. The scales flew round to 46lbs 8oz. That’ll be a new lake record then, not bad for your first take!

There was no luck in this capture by the way, just excellent prep and good tactics.

Just look at the state of the hooklink that landed that mirror! The carp tried very hard to grind through it on one of the many granite rocks that litter the bottom. Most standard carp hooklinks would never have survived this kind of punishment, that’s why we now sell our own. It’s one of very few products that can survive this kind of beating! 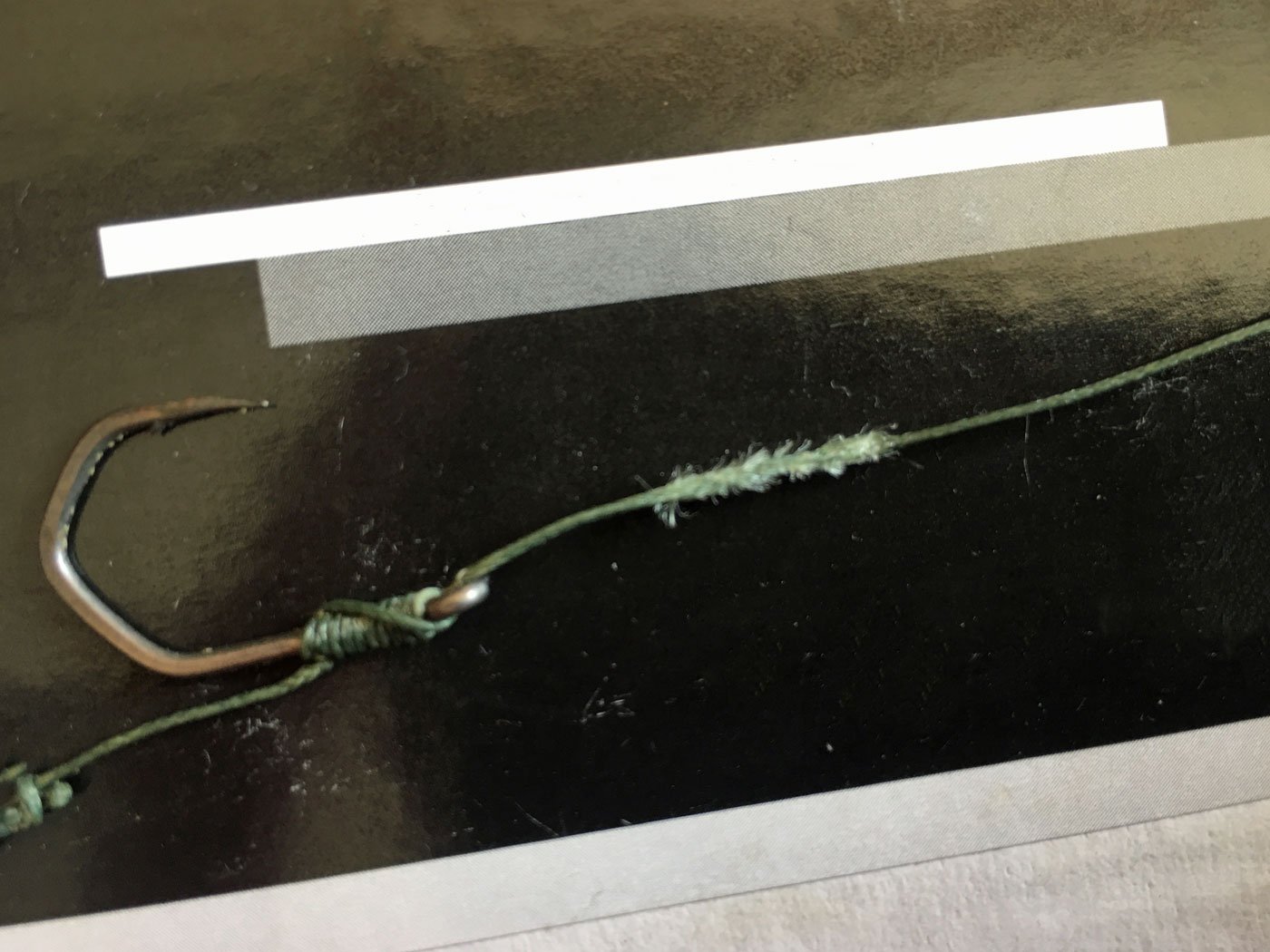 Two more fish were banked before the guys had to hit the road on Friday lunchtime. Matthew banked a lovely mirror of 36lbs known as Magnum at a new top weight of 36lbs and he also bagged another catfish of 51lbs.

Gareth had some savage liners, some of which he left but when he went to re-do the rod, the hook point was badly damaged. By the end of the session, he worked out that the lead was being dragged into the rocks, making them useless for the rest of the night. For me, this is all part of fishing this challenging yet fascinating venue. Even now, after eight years of fishing it and observing guests fish it, I’m still learning! 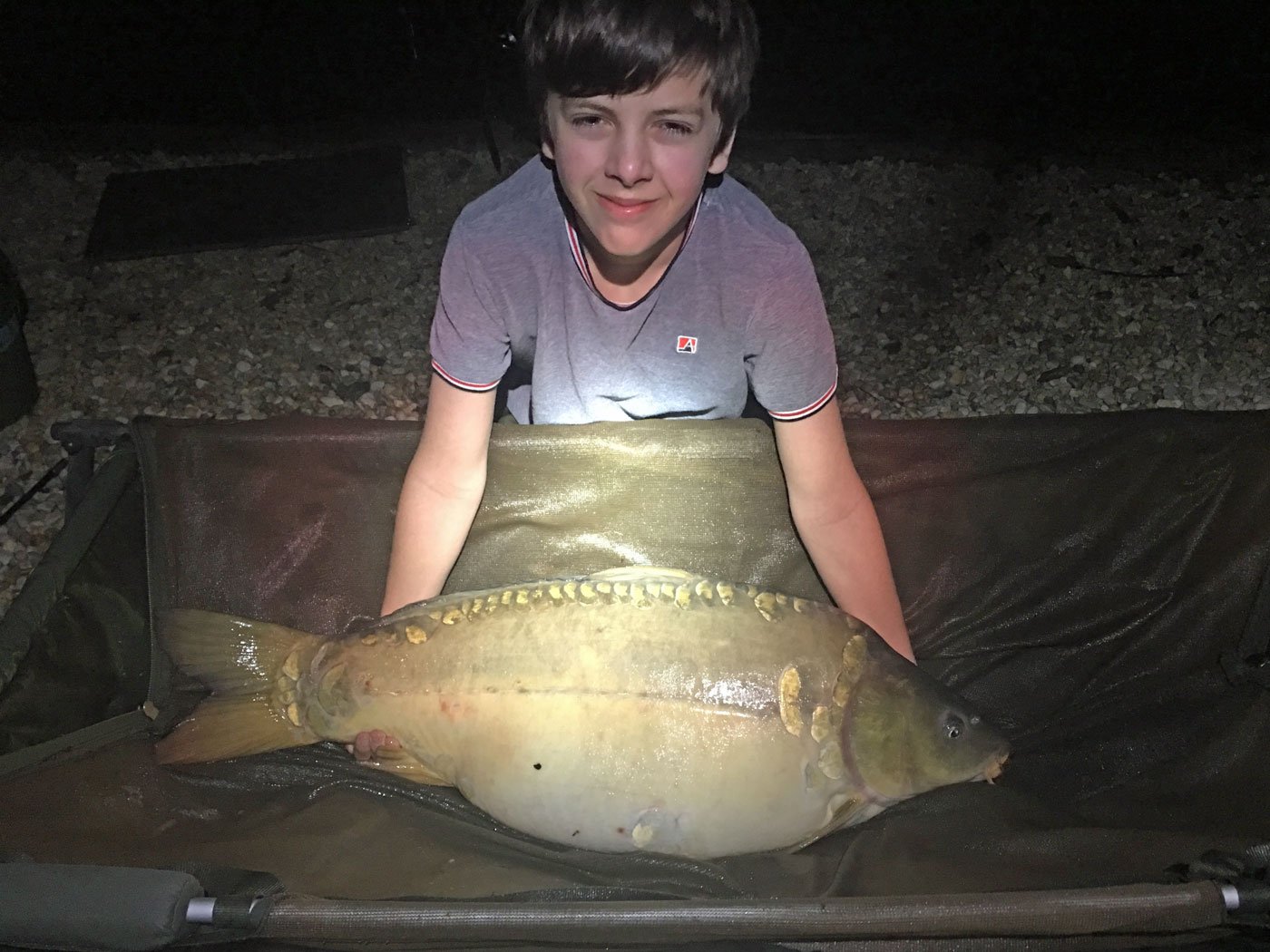 As an engineer, Gareth was keen to incorporate kettle bell testing into his fishing. Doing these tests highlighted a problem in the way he was tightening down his knots. With the blood knot, if you pull on the tag end too much, it’s counterproductive and can cause premature failures. Only the kettle bell test can prove this and after adjusting his technique, the pass rate increased as did the confidence for whatever came along.

Gareth and Matthew really love their carp fishing and to give them an edge they researched what carp really need in terms of amino acids and then set about designing and making their own bait which takes a serious amount of time and effort. As they only use small quantities of bait back home, they added some of our bait which would be introduced as freebies. Both carp were caught on their homemade specials with the addition of a soft paste wrap which made it extra special for them. The 103lbs cat fell for one of our 24mm Shrimp & Crayfish boilies.

It’s always wonderful to see parents and children enjoy such happy times on the bank. The tutorial enabled Matthew to become more self-sufficient and the nice mirror he banked was solely down to his own skills and efforts and he made his dad very proud.

Before they left, Gareth wasted no time in reserving a week for next April and it will be a pleasure to welcome them back. Beausoleil is a steep learning curve for most anglers and it’s very special for us to see new guests make a strong connection with the venue.

Left hand side front centre peg under tree, shelf opposite

Nothing, very happy. Will be back next year.

Did the lesson with Matt for myself and my son. Fantastic! Could not recommend it highly enough! Great session on hook sharpening. Super simple, strong effective rigs. My old rigs would not have held the 46lbs 8oz carp and never even touched the big catfish. 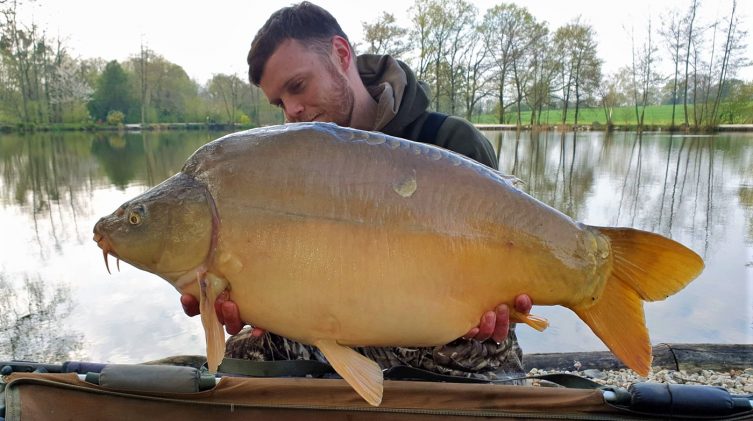 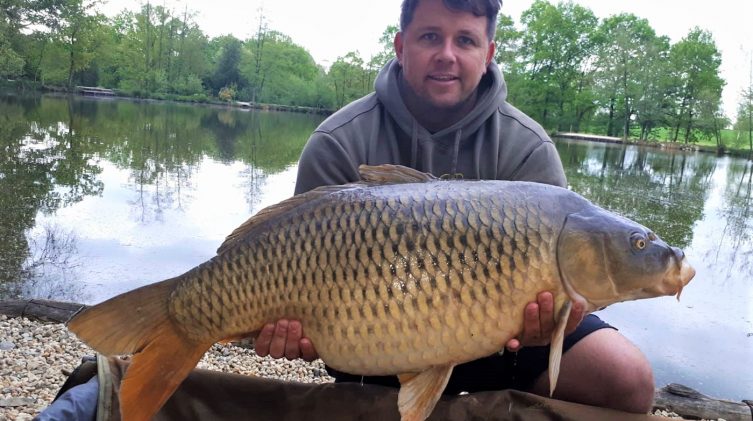