A dream start to the season for Nik with a new catfish lake record of 113lbs and 15 carp between 30lbs and 39lbs.

Nik and Jo visited us for the first time 18 months ago for the last week of 2017. They loved it, and this year they decided to do a two-week session. With the forecast set for clear skies and high pressure for their stay, I was a bit nervous that it would be a bit of slog. We need not have worried though as Nik started strongly and never stopped. During the two weeks he caught 15 x 30lbs+ carp to 39lbs and multiple 90lbs+ cats including the new lake record of 113lbs!

To see all the incredible fish caught by Nik, check out his gallery here.

Here’s how Nik summarised his session

We were here for two weeks R& R and although the fishing is important, sometimes just being somewhere so beautiful is enough! I don’t think I fished any longer than 10 hrs at a time. I only fished one night and that was a blank. If you just turn up at Beau and think it’s your average French runs water you will go home very disappointed! I fished point ‘B’ and ‘C’ to just about every area of the lake that was open to me! If you work at it the results and the quality fish are there to be caught. I think my fishing benefited from resting the swims nightly. I got through less than 8kg of bait and 10kg of pellet. I only fished small traps for one fish at a time. I tried very hard to avoid the cats (failed lol) by spending a lot of time with a leading rod in the margins. Open water water produced the cats. Thanks Matt & Ren, we had an amazing time and will be back to catch Bobby again. Nik & Jo XX.

Let’s look at how it all happened.

The KISS of success

Nik is a very accomplished angler and his approach is absolutely rock solid. He did a lot of research on the place before even wetting a line here and he’d been keeping a very close eye since his first session. He’s adopted the various tricks that I’ve been using for years to catch out these wily fish and combined with his ”Keep It Simple Stupid” approach and solid water craft, he made the fishing look easy (which it’s not). Nik worked hard every day for every bite and never took the easy path hoping for something to happen. Nik had thought long and hard about his approach to this session, drew up a plan of attack and executed it with military precision. Every bite was carefully engineered and he kept working right up until the last hour. It was fantastic to witness and I learnt a few new tricks myself!

For the most part, rigs were simple knotless knotted bottom baits or wafters topped off with some fake corn. He did use the occasional popup and caught on these too. Later in the week he tried one of my rigs and the runs just kept coming! In my opinion his hand sharpened hooks made all the difference and these were up there with the very best I’ve seen.

Nik’s not one for the “that’ll do” approach. If it isn’t perfect, it doesn’t go out. His attention to detail with hooks and his religious approach to knot testing also explains how he was able to bank so many big fish without a single loss… not even a hookpull…. pure class!

Sticking to what works

The mainstay of Nik’s approach was our 20mm Shrimp & Crayfish which I’d been doing very well on in the pre-season testing. This, combined with a wide selection of his own hookbaits, proved a killer combo.

He stuck to a simple baiting strategy of small bait boat traps of pellet and boilie (one bite at a time) for the whole session and this kept working. On one open water spot, he did spray some pellets and boilies over a wider area and this produced the bulk of the catfish.

Tactics wise, Nik went for one of my favourites but with a twist. I call my version “spot lottery”. Nik’s version was much more dynamic and after every catch the trap was moved and the game changed! Let’s call it rolling spot lottery!

Feature finding was done using a leading rod and a marker rod and he used a bait boat to get them out to a high degree of accuracy, first time, every time. One area was an easy cast to a clipped up mark so no bait boat necessary.

What was also interesting is that Nik didn’t try and cram in as many rod hours as possible and he thought this was one of the keys to his success. Over the 2 weeks, he only did the one night and stuck to daylight hours only. This gave the fish plenty of time without lines in the water to gain a bit of confidence and pick up some baits. The result was that when he did actually fish, he didn’t have to wait too long before he caught, and once he’d had his fill for the day he wound in and relaxed with Jo. Pre-located spots were primed with bait for the next day to build confidence and the next run was never very long in coming!

This was a big surprise to me as we would always recommend doing the nights. Nik was able to reverse the rules this time and this resulted in an incredible string of fabulous daytime photos! Obviously it’s a bit different when you have the entire venue to yourself and 4 acres of water to spread yourself over but as I’ve seen before, grinding them out with as many rod hours as possible is counter productive here.

Nik freely admits to being a dyed in the wool carp man and catfish are not something he specifically targets. In fact he tried to avoid them by fishing small carp sized traps. Typical then that this mild spell of weather has got the cats active early and they couldn’t wait to come out and play. Again, Nik’s attention to detail with hooks and knots meant that even on standard carp gear these beasts can be tamed by those with the right skills.

Nik’s rigs tricked everything from 10lbs to 113lbs so it just goes to show you what can be done with a properly tied rig.

The battle with the 113lb specimen was an epic 45min affair. It takes nerves of steel, very good gear and no end of pure grunt to do this. Nik’s experience made a massive difference here and he played the game of cat and mouse to perfection. These beasts have to be teased in. The harder you pull, the harder they pull and the result is something’s gonna break! Once at the bank, wearing a pair of catfish gloves, Nik had to hold the cat with one hand and once sure of his grip put the rod down and got a good hold with the other. With the catfish mat ready, Nik was able to place his feet on the heavy duty swim edging and then haul with all his might. Nik’s a very strong man and joked that if it weighed 114lbs he wouldn’t have been able to do it!

A 50% hooked-to-land ratio used to be the norm. Not anymore!

Nowadays, with the kettle bell test and 25lb Big Game, this percentage has improved greatly. Nik banked every catfish (and every carp!) he hooked. How the hell Nik managed to bank so many massive cats by himself I’ll never know!

A huge variety of growing specimens

What struck us when going through the photos was the incredible variety of stock we now have. Between the original stock and the recent stockings we have done, we now have a large range of shapes, colours and scaling and it was particularly wonderful for us to see them in their spring colours. 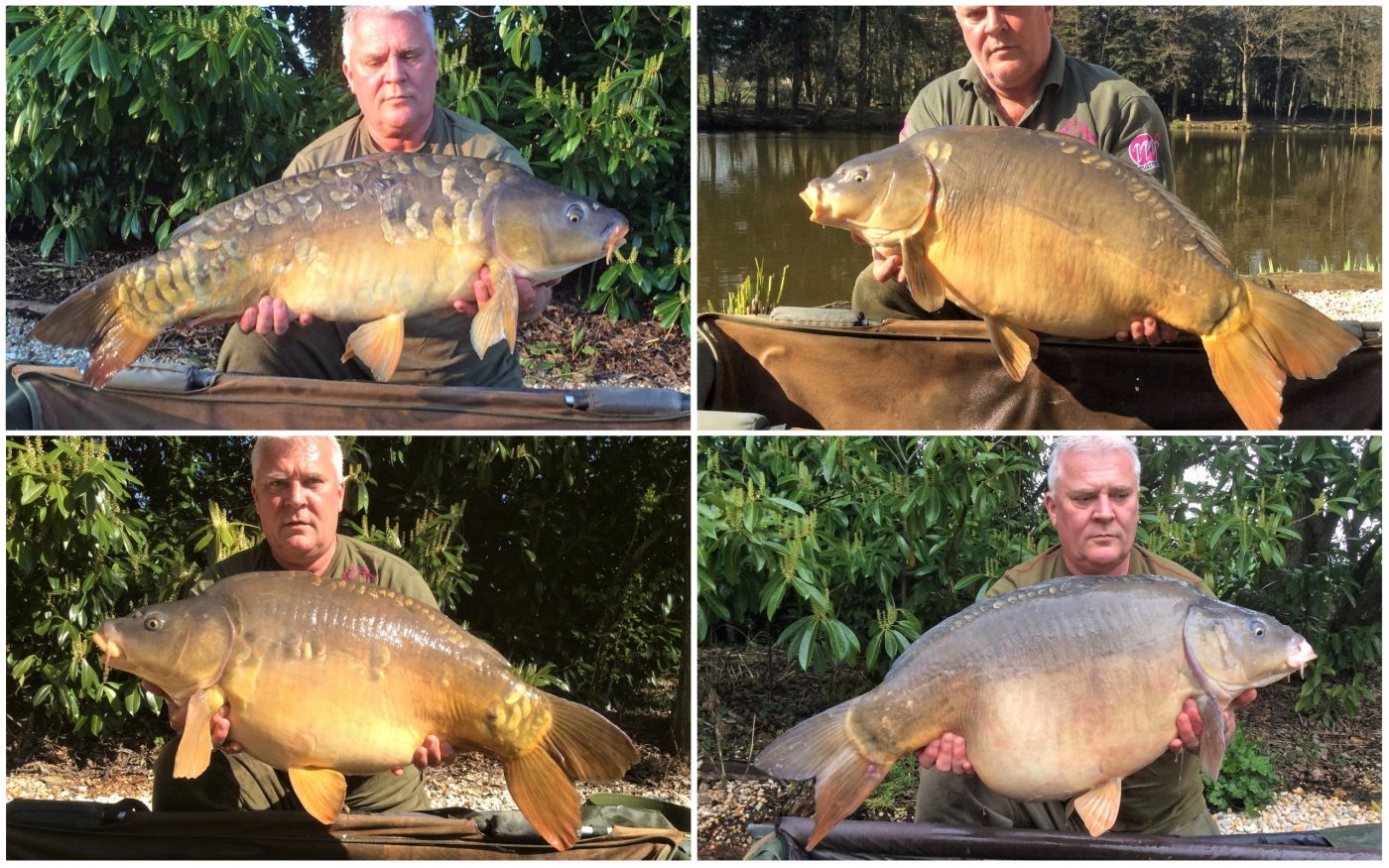 The younger carp (about 20 in total) have been growing for three summers now and are just about to start their 4th. The heavily scaled mirrors are some of the prettiest fish I’ve ever seen and with them being low doubles already, the future is looking white hot, never mind orange! Nik commented to me that “it’s quality stock like this that will keep me returning for many years”. All the carp have come through the netting and the winter looking very clean. Talking of growth, one of the big surprises was the capture of the Sub at 39lbs+ We only stocked this fish at 30lbs in 2017 and he joins a number of other carp that are making significant year on year gains. 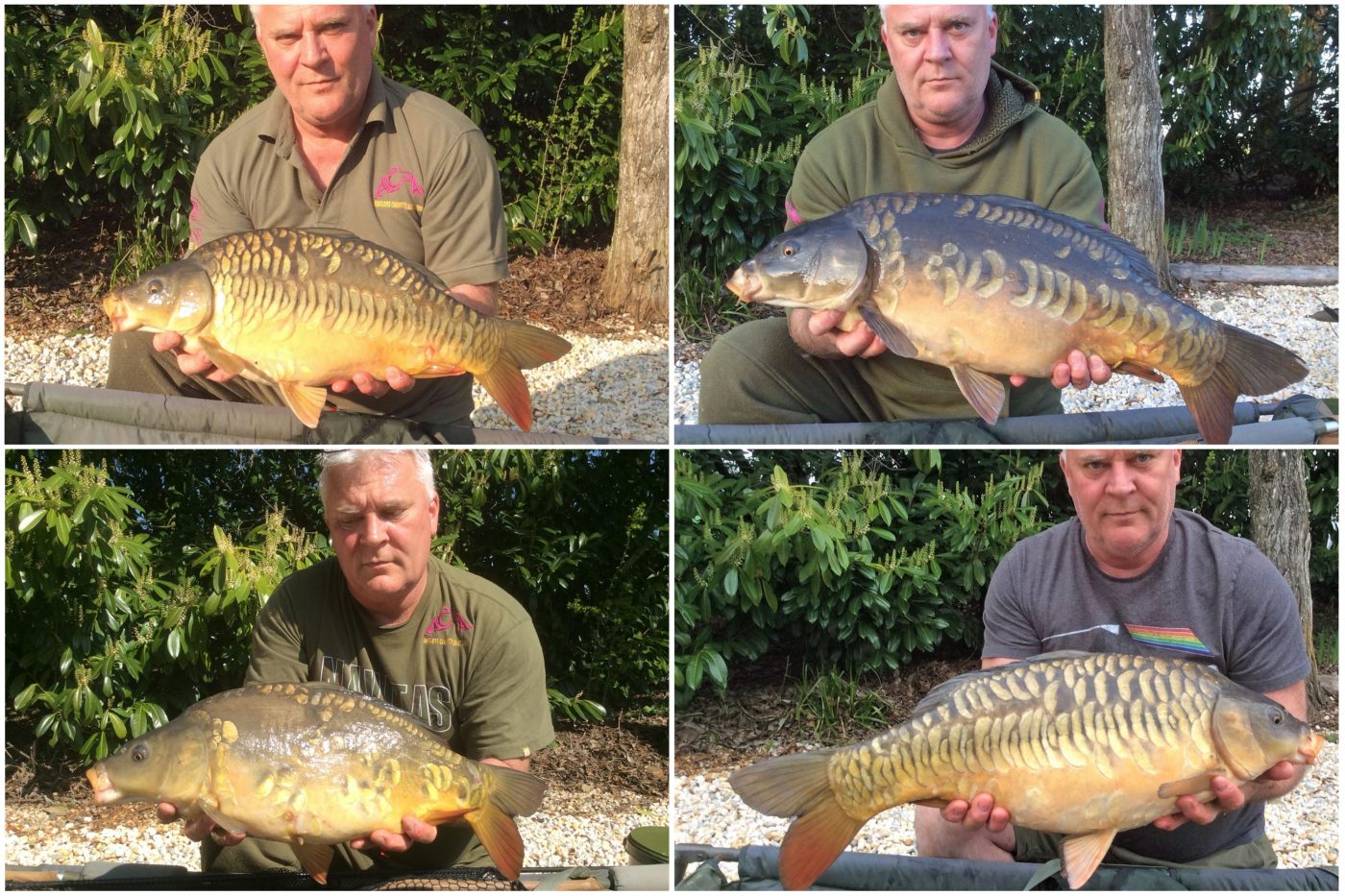 More to enjoy than just fishing

It’s only on holiday that Jo gets the time to relax away from everyday life and she made the most of every second of it. Nik and Jo made a few trips out to the nearby town and enjoyed a little retail therapy. Big thanks to them both for the time and trouble they took to carefully weigh and photograph every fish. It was a dream session for Nik and the weather was very kind for Jo with temps hitting 20 degrees on some days (not bad for March!). It was an absolute pleasure to welcome this hard working couple back to the venue for some much needed R&R and we very much look forward to welcoming them again in the future.

Points B and C

We have been coming to France for 20+ years. Never come across a more passionate and caring couple. Nothing is too much trouble. Ignore Matt's advice at your peril! Thank you so much for the fish name. We will be back xxxx
Share this - 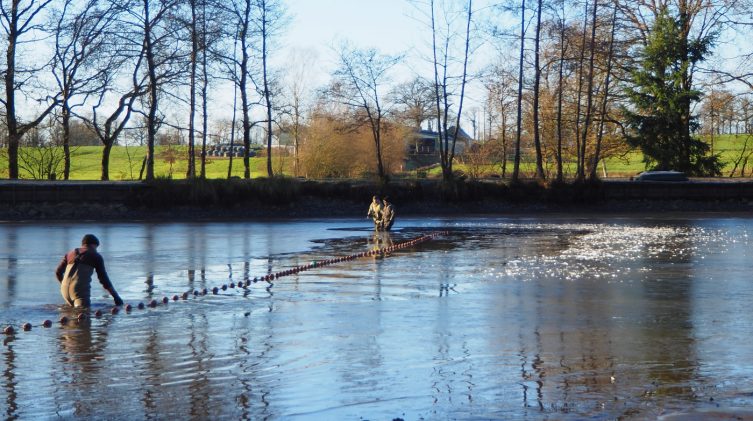 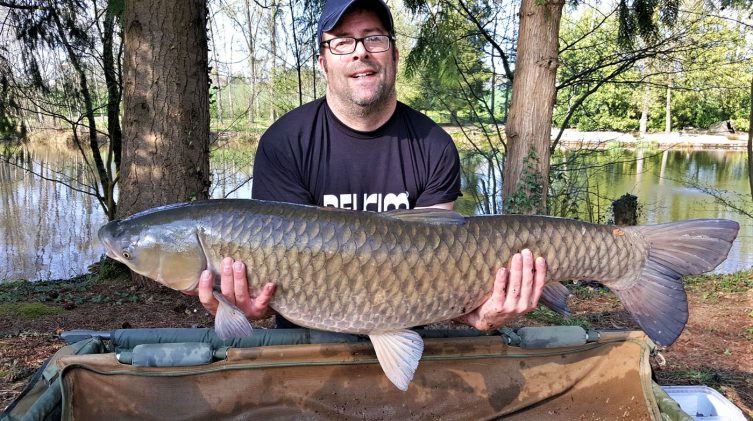