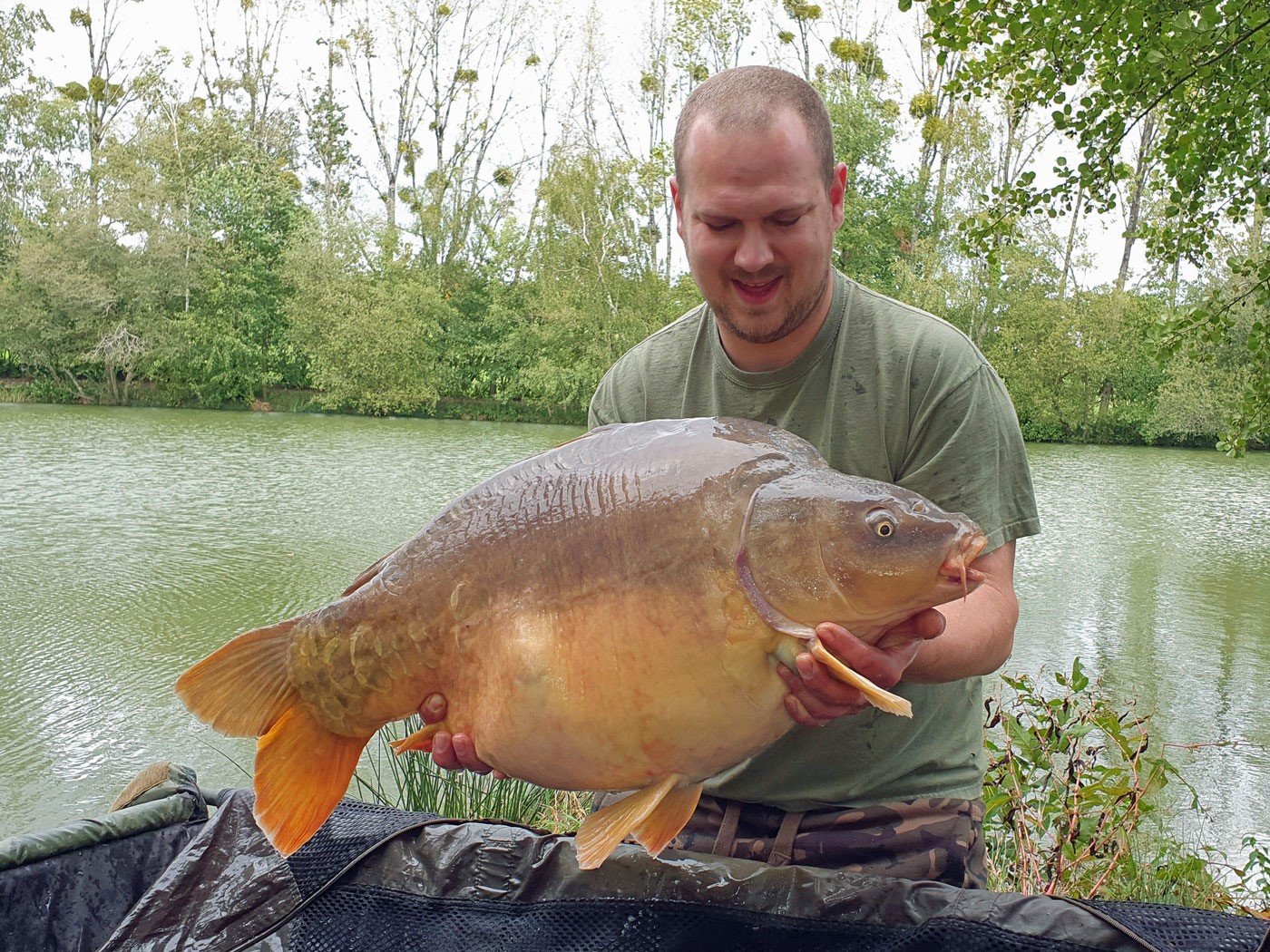 A fabulous late season session for Beausoleil super-fans Dan and Andy: they smash their PB’s here again with 2 x 40’s and bank some cracking 20’s and 30’s!

This week we welcomed back Andy and his dad Colin, along with best mate Dan. Andy and Dan have done 4 sessions together since 2013 and are real Beausoleil super fans. After many years as a course angler, Andy’s dad, Colin, got into carp fishing by accident when Dan had to pull out of their trip last year. This trip would only be his second ever carp fishing session!

It’s been almost three years since Dan’s been able to make it and the place has changed a lot during those years. The guys leapt at the chance to sneak a trip over late season. They’d already booked one of the sought after spring weeks for next year and simply couldn’t wait that long!

The lake is looking great, the algae bloom has finally disappeared and the water was looking a very nice light green, bright, and sparkling. We saw a couple of big boshes and some big bow waves during the tour. Plenty enough to stoke the fires! 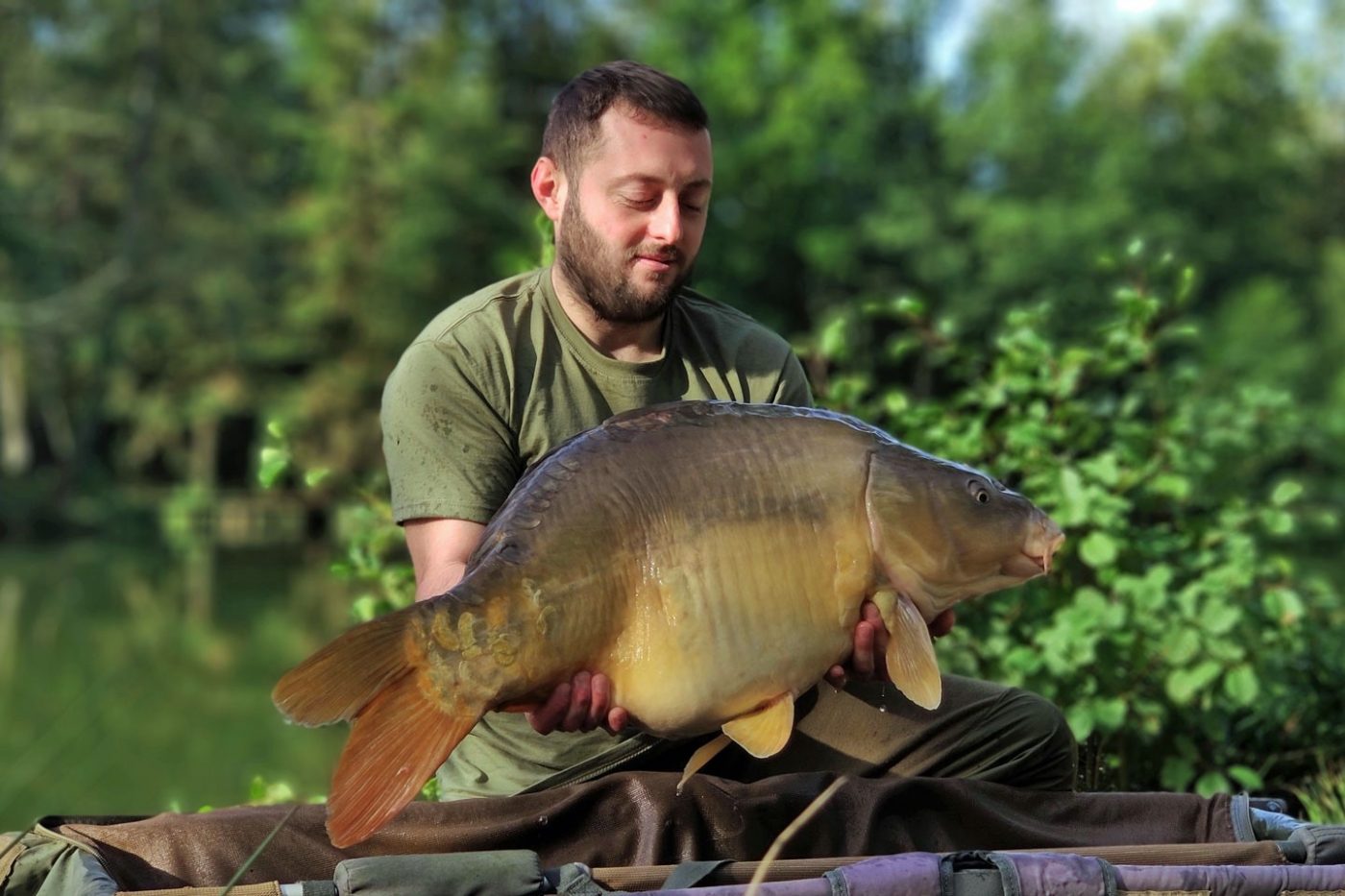 I returned Monday to a very wet Beausoleil. Andy was in the Big Double, Colin was in Island point and Dan was in the Oaks (buoyed by Jay’s success last week from this unfancied swim). No one had banked anything yet but the guys weren’t phased as they knew the water well. Andy was keen for a few tips on knot tying and testing so out came the Big Game and the kettle bell. He loved the method I use to tie knots and could clearly see a massive difference in the strength and neatness of the knot compared to the Palomar he was used to.

While we were chatting we just caught a glimpse of a very good carp that showed over a known spot. Fortunately, Andy knows the spot too. In fact it was exactly where he’d set one of his traps! After a coffee and social in Andy’s 2 man bivvy I left the guys to to it.

Later that day, it was that same rod that produced the first fish of the session! It turned out to be a common of 35lbs+ looking absolutely mint and a very rare visitor to the bank. That common marked a crazy run of 3 fish in three hours as both Dan and Colin broke their ducks.

It’s been a great year at Beausoleil with plenty of 40’s banked throughout the season. Even some carp which we thought had topped out are now making the heavyweight class. Hyphen is one of our friendlier carp and comes out several times each year. This old warrior has never done 40 before though until Simon had him a few weeks ago and then Andy this week as well. Andy was absolutely buzzing. It was a new PB for him and it really was thoroughly deserved.

When I called round Wednesday, it still wasn’t happening for Dan. After being driven crazy by rain drops and acorns falling onto his bivvy all day and all night, and only a 13lbs 8oz mirror to his name, Dan needed to make a move and relocated to the Point swims.

I could see he had a rod out of point ‘C’ and while I was in the boat I asked Dan where he’d dropped it. I knew the area was very very choddy so suggested a move to a better spot further down the bank. Later that evening, the bobbin twitched and locked hard up to the top. No mistaking that bite then! At first Dan was convinced he was into a cat. He’s banked a few of our goodun’s before so he knows how hard they pull. He was so convinced that Andy rushed round and donned the waders (standard procedure for landing a massive catfish nowadays).

After a really good scrap up and down snake bank and then into open water, a big bronze flank was revealed and you could have knocked Dan down with a feather! This was obviously a very good carp and on steroids (actually he was on our AVT 24 boosted boilies… same thing really!). Neither of them recognised the carp but the scales said 41lbs 8oz and it was a PB for Dan too! We later identified the carp as Scalpel.

Now he’s a proper rare visitor to the bank and has never done 40lbs before either. Both Hyphen and Scalpel are from the original stock of fish. It’s amazing to see these old warriors still growing and responding to improvements we’ve made to the environment. I think that takes the tally to ten different 40’s this year… which for us is simply amazing!

Dan’s move definitely paid off as he banked a carp a day after changing swims. And with the temperatures rising to over 20 degrees at the end of the week, he was in shorts and tee-shirt when it came to holding the mighty Football at 36lbs!

It’s all in the prep.

It’s a funny old game carp fishing and proper specimen carp fishing isn’t for everyone. It takes a huge amount of skill and patience to catch carp regularly here.

The guys have never done a structured tutorial with me but over the years I’ve had the opportunity to share plenty of tips with them. They do a lot of homework away from the venue and they are always very keen to learn more when we see them and they soak it all up like sponges!

The secret to carp fishing is all in the prep and the guys leave nothing to chance and have total faith in the Beausoleil method: small traps, accurate rig placement, hand sharpened hooks. Well done guys, great angling.

Don’t forget to subscribe to our newsletter to be the first to hear about our special offers!

We love Andy’s dad. It’s amazing how he’s taken to the sport later in life, he even has his own Beausoleil tee-shirt now! Obviously having a son like Andy to guide him every step of the way is a massive edge but it takes a certain special type of father that can listen, follow and then apply what his son says. 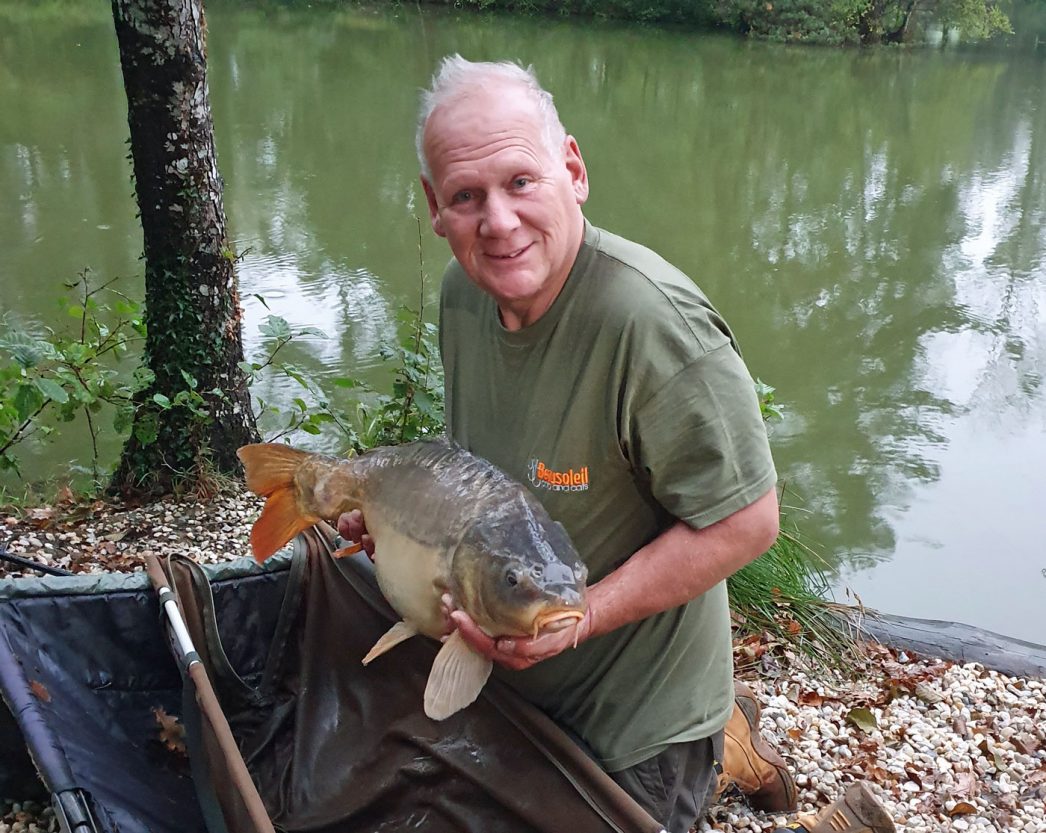 Colin isn’t really bothered about the size but he really appreciates the quality of the stock we have and he caught some great looking specimens this week. For him actually catching a carp is bonus, he just loves being bivvied up, in beautiful surroundings in the very heart of the French countryside. And now of course, after catching 4 commons out of 5 fish, he’ll be known as “Common Colin” 🙂

With the water temperature steadily dropping week on week we haven’t seen a cat on the bank for a few weeks now. Andy and Dan love their big cats and were delighted with the “little one” they did bank. At 63lbs it’s one of the smallest catfish in the lake… Still it was enough to fuel their dreams of monster moggies next year when they are both gunning for their first three figure specimen.

Special thanks to the guys for the time and trouble they took with the photos during the session. Come rain or shine, Andy leapt at the chance of doing a water shot for every good sized carp. It’s interesting to note that all the fish this week from the Big Double came during the day whereas they came at night last week. There is no telling when you’ll get a bite here.

It’s not uncommon that someone has to nip back to the house and with Andy and his Dad on the same bank just yards apart, it wasn’t a problem to leave one person in charge of the rods for a short time. During one particular visit, one of Andy’s rods leapt into life and Colin lifted into a very angry carp. A quick buzz on the walkie had Andy scurrying back pronto and he was able to play it the rest of the way in. It’s only fair for the 2 of them to share the credit for this mint 29lbs 8oz common. 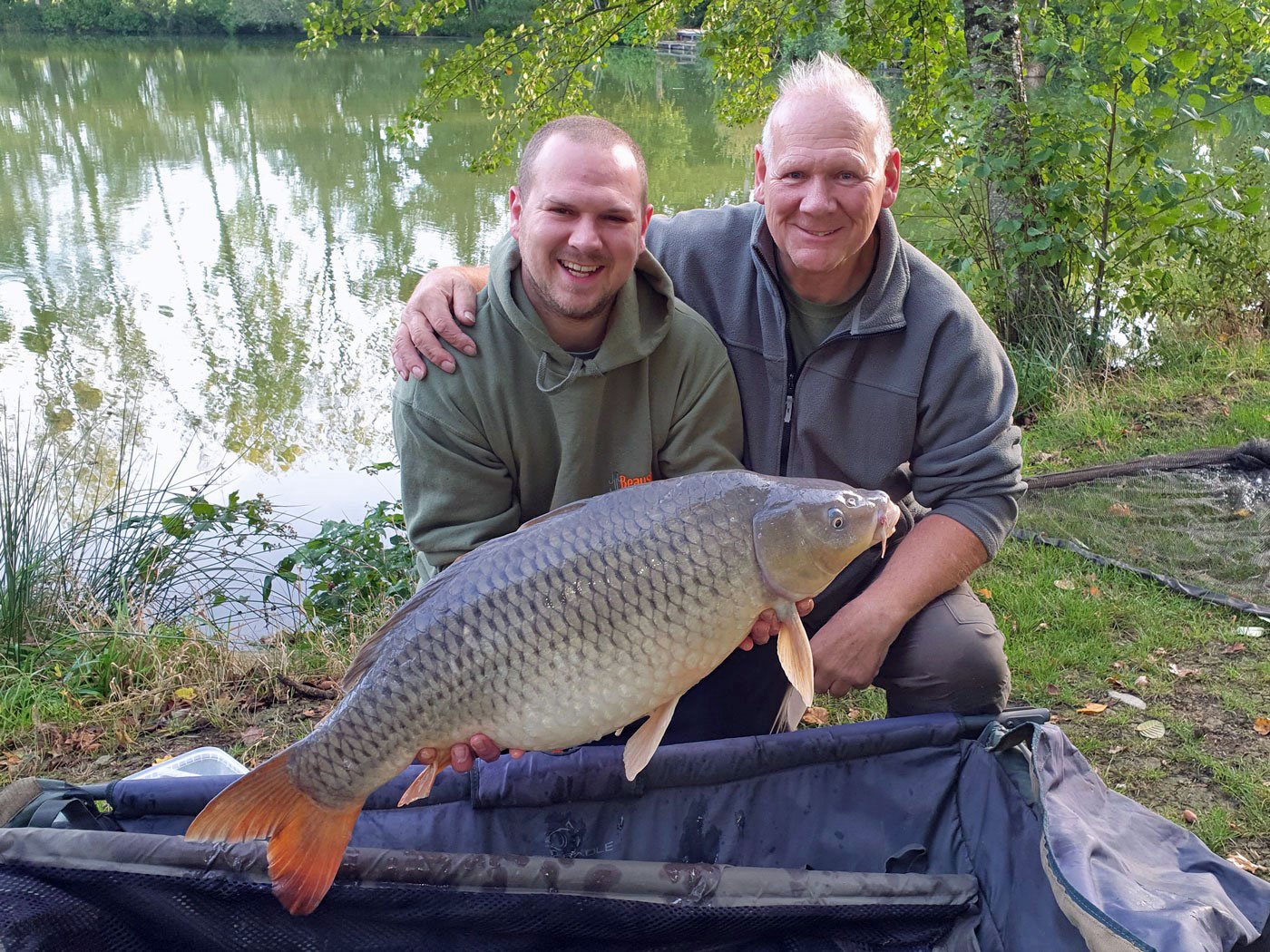 It was fabulous to see the guys again and share the love they have for Beausoleil. It’s not a venue you can master in a week. It takes multiple trips. Years of dedication in fact.

Just to put things in perspective, when they first visited the venue back in October 2013, the biggest carp caught was 30lb. This year, they had 6x 30’s and 2x 40’s. As the fish continue to develop and grow, the guys continue to beat their PBs. Andy and Dan have done the hard yards, put in the graft and reap the rewards.

We salute their commitment and dedication to our special little lake. Effort always equals reward in carp fishing and this year the guys were rewarded most handsomely. Massive congratulations guys and thanks for sharing your passion with us. See you next year when you might have a shot at angling for a 50! 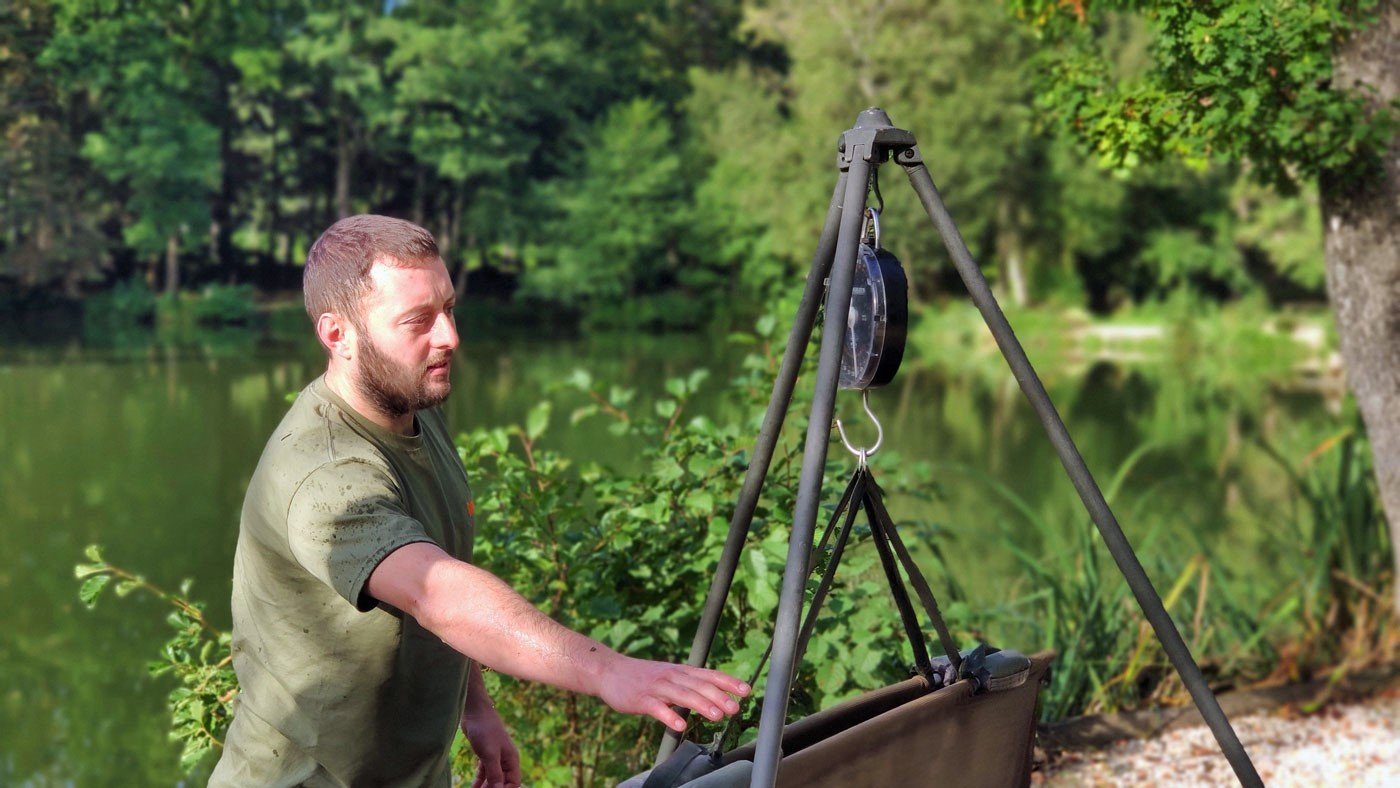 Yet again, another awesome trip. Can’t wait to get back in 2020. I wouldn’t change anything. 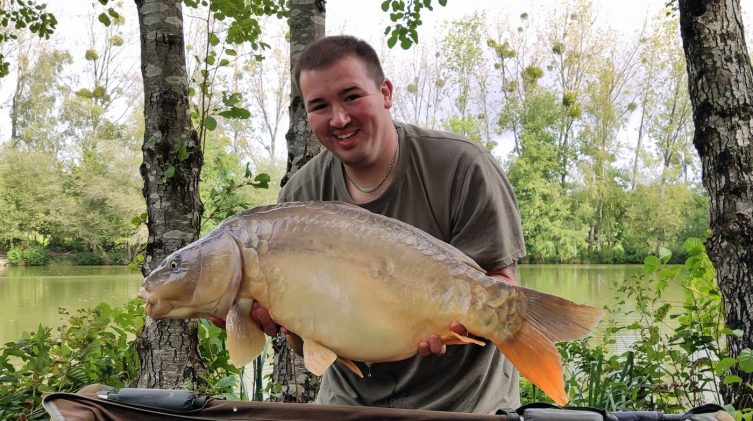 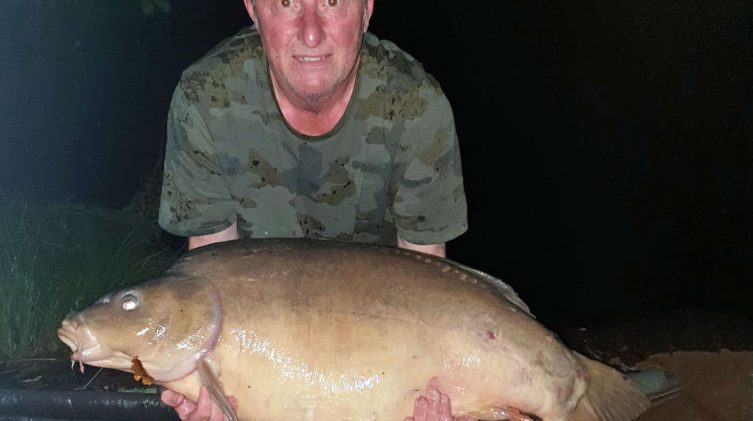