This week we welcomed back Luke and fiancée Sarah along with Luke’s parents for their 2nd carp fishing holiday at the venue. It was great to see them again and it was wonderful to see how excited they were to be here. After a good catch up, we had a wander around and spooked multiple massive specimens from catfish corner. That racked the excitement levels to max and they couldn’t wait to get started!

Just finished our second visit to Beausoleil and second time around was even better than our first! Having been to a number of French carp venues in the past nothing compared to Beausoleil, and that is completely down to the care and dedication of the venue owners. The fishing is fantastic, a perfect balance of challenge and enjoyment. The carp are smart and the catfish are warriors . . . . but listen to Matt’s guidance, read the catch reports & follow the lake rules and you will have a great week of fishing. The rush of fighting a 100lb+ catfish is brilliant, exhausting, but brilliant! As relatively novice carp anglers who only fish once a year, Beausoleil has taken our angling to another level and enabled us to catch 40lb+ carp and 100lb+ catfish . . . something previously we would never have dreamed of! But now we have done it 2 years on the bounce! We will be returning for our third visit very soon! Luke

Off to a flyer

Luke wasted no time at all in getting among the fish, banking a 30lb mirror and the sturgeon before Sunday morning breakfast! It was a warm old day when they’d arrived and it took them until midnight to actually get the rods in. This is when the previous knowledge of the venue pays off handsomely as it was just a matter of dropping some rigs off on some known spots and let the magical Beausoleil rig do the rest. 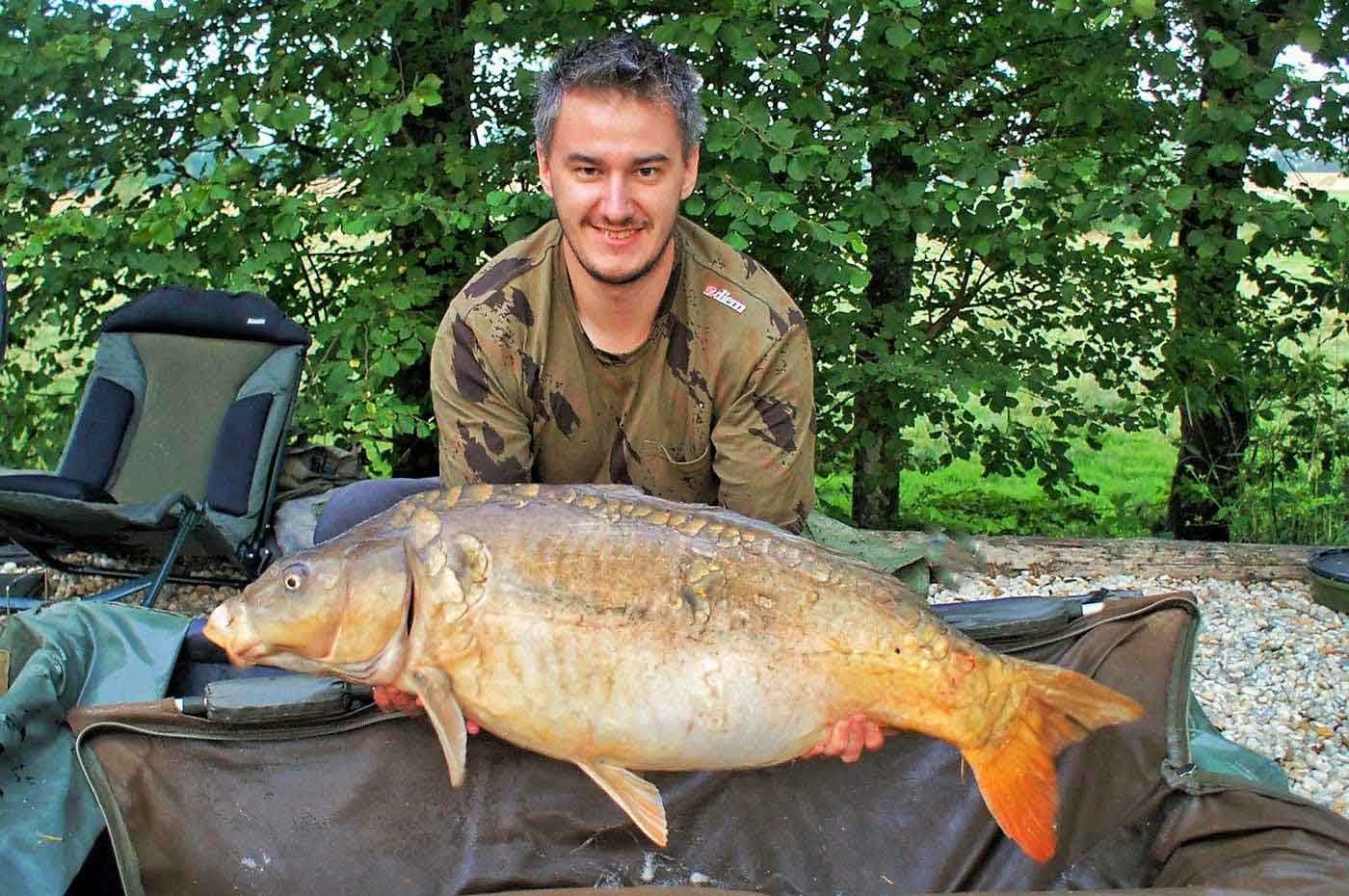 While Luke was busy banking carp, Luke’s mum Joyce was putting the finishing touches to the lodge and making the place uniquely theirs for the week. Beausoleil is not just about fishing, it’s a peaceful place to spend precious time with your family, a haven for wildlife and an amphitheater of bird song.

BEAUSOLEIL NEWSLETTER
Get the Beausoleil catch reports, special offers
and cancellations straight in your inbox (once a month).

Luke’s dad Dave loves his fishing but he’s always so relaxed about it that he’s really not bothered whether he banks anything or not. The carp gods decided that it was Dave’s turn next and he opened with a nice 29lb mirror. That just left Sarah to catch but when I called round Monday the reason for her lack of success was pretty easy to identify… she hadn’t done a night yet 🙂 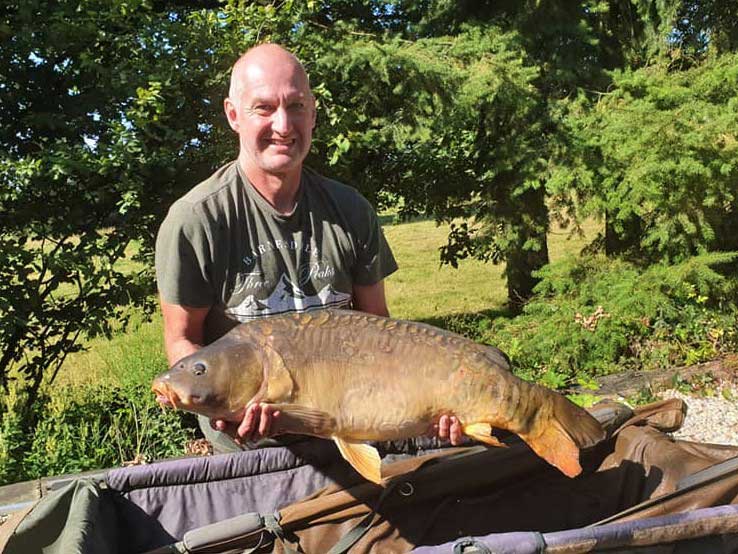 Find out why Beausoleil is carp fishing heaven for specimen anglers

With Sarah concentrating on her tan and mum and dad having a very relaxing time, Luke continued to haul like a carp catching machine. By Wednesday, he was on nine fish, a good individual tally here.

Luke’s approach is textbook: carefully laid small traps of Beausoleil boilies and pellets with a simple double 20mm Beausoleil bottom bait rig over the top. This rig has been used at the venue since we took over and still continues to catch big carp and massive catfish week in week out.

Luke ties all his own rigs and sharpens his own hooks. He just does all the things he learnt from the first trip and does them right… Simple really!

Our grass carp is a bit of an oddball. Last year he went all shy and remained uncaught for an entire year.

This year he’s thrown caution to the wind and has made his 2nd appearance. This time the lucky angler was Dave and he was looking mint at 43lbs,.. a new top weight.

Grass carp are very difficult to handle and can be quite dangerous. They are pure muscle and at 4ft long they can give you one hell of a slap with that tail! Dave did very well and erred on the side of caution with the photos keeping him low in the cradle. 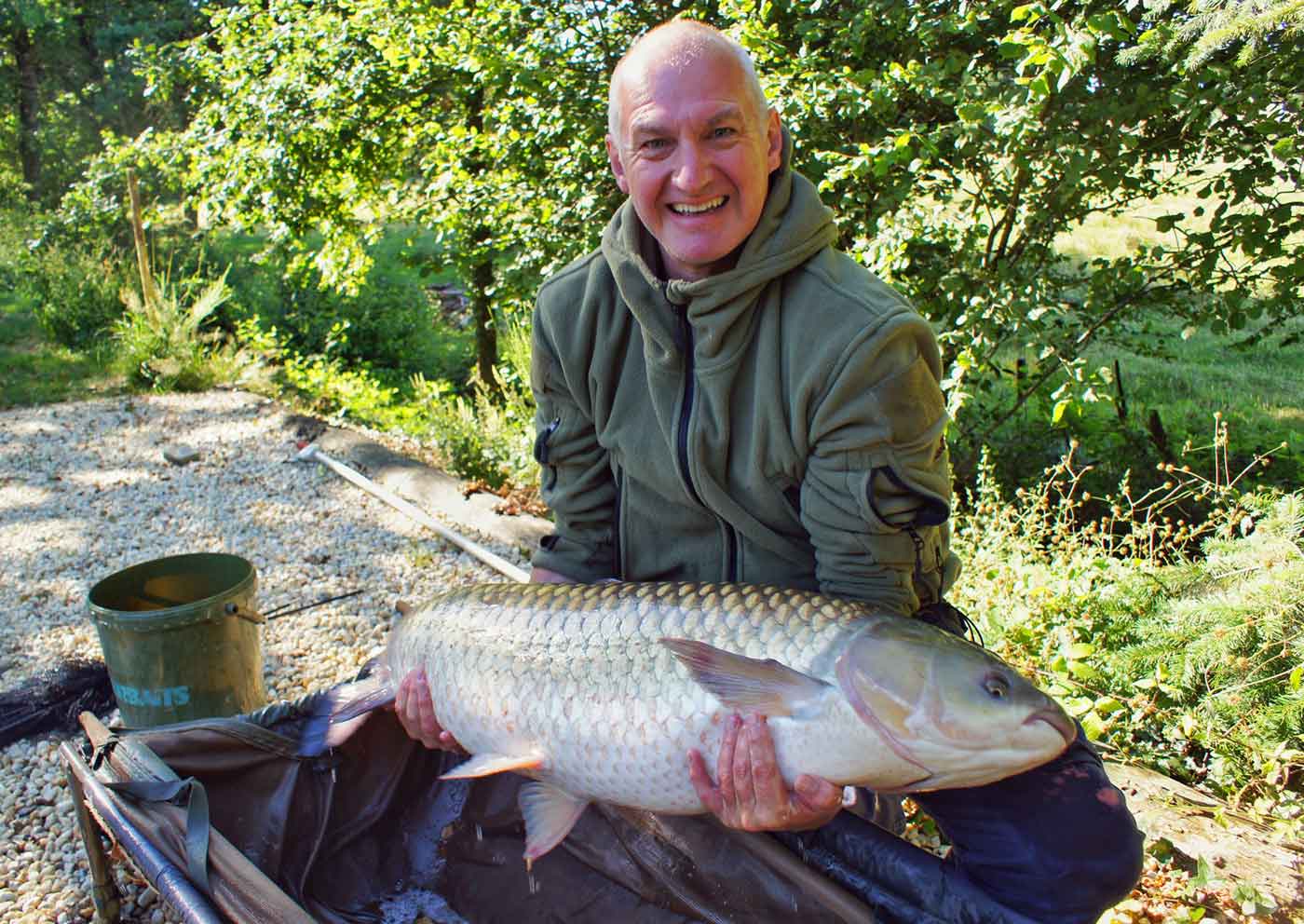 By Wednesday the unevenness in the score was getting a bit too much so Luke swapped swims with Sarah and put her on the spots that were working well. It was typical then that the carp gods decided to shine brightly upon Luke again and he banked a cracking 37lb mirror from one of Sarah’s spots just a few hours after moving things round…. Oops. When you’re good, you’re good!

With everything perfectly in place and Sarah comfortably installed for the night it was never going to be long before she actually had a take… Ok so the first one fell off but she did bank a 26lb mirror and then the sturgeon before breakfast which put a massive smile on her face.

A note on night fishing

During the summer months, it’s really important to do the nights. The carp are quite easy to find during daylight hours. They love to find a nice shady spot close to some overhanging foliage. They’ll hang there near motionless for hours just sifting daphnia. Anglers often mistake this as a clear sign that they are not hungry but unless the oxygen is poor, carp are relentless eating machines and will smash through huge quantities of both natural food and anglers’ baits if they have the chance! They feed heavily after dark and so if you’re not fishing at night you are compromising your chances.

We do have a few guests that don’t do the nights and are still successful but they tend to be very familiar with the venue and are good at reading its moods. Knowing when and where to drop a rig is and just as important as knowing when to wind in and relax. 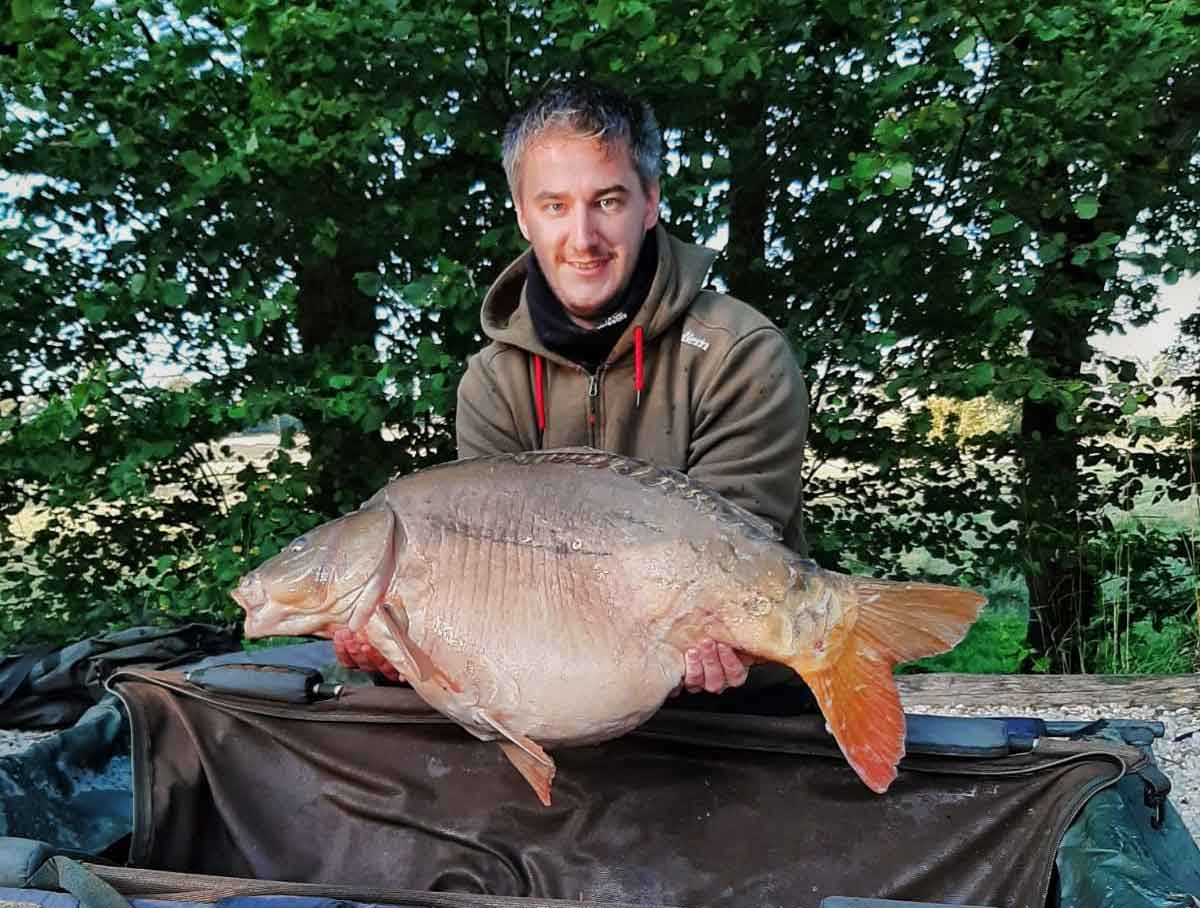 With no cats visiting the carp traps by Thursday, Luke decided it was about time to have a crack at upping his PB. To beat it, he’d need to bank a specimen of 107lbs… it’s crazy to think we have three cats that can do this! After dinner, Luke set up the cat trap that had already worked for him the year before and relaxed for the evening. In the early hours of the morning, the trap was sprung and all hell broke loose!

From past experience, they knew they’d dramatically increase their chances by winding all rods in as these fish can pretty much go wherever they want even with a fully locked clutch on a big pit reel. 20 minutes into the fight and this one fancied a tour of the far side of the island. As Luke was in the Big Double this meant there was only one option… get in the boat!

Now being towed round the lake by a catfish can be quite fun in daylight… at night it takes on a whole new level of excitement! Dad took control of the oars, Luke was on the rod and Sarah stayed on shore to help out.

For a time a deadlock was reached as the catfish refuse to move from the island margin but eventually, with the steady application of rod pressure, they teased it out. Luke was quite convinced that they’d have to bank it in point swims but with no gear ready to accept it, they opted to try and return back to the Big Double. Fortunately, Dave’s a fit strong man and somehow he was able to row back with the catfish in tow… This was seriously hard work!

Once they got back to base, all went smoothly and it span the scales round to 108lb! It was a seriously good team effort and a brilliant bit of angling by everyone. I don’t know of many nocturnal catfish boat battles that ended well but it just goes to show, with a lot of skill, it can be done! 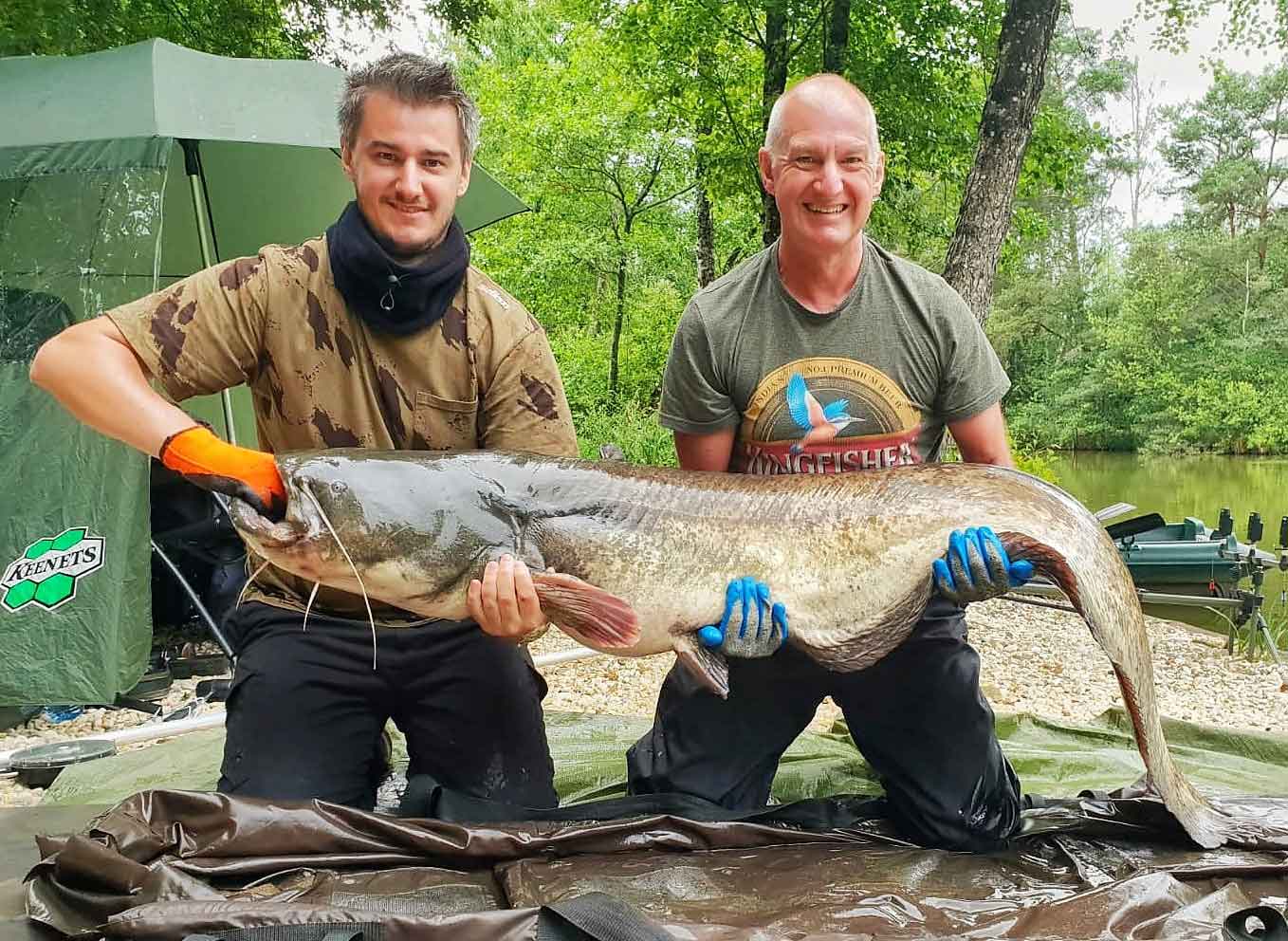 It was a very successful week but there were a couple of fish that got away. Dave lost a catfish which sawed through his 35lbs Kryston Supernova hooklink. I know that on paper this hooklink is in line with our rules and yes I used to recommend the 25lb version for fishing here but experience has taught me that this product is not adequate as the abrasion resistance is poor even at 35lbs.

Note: this is why we sell our own hooklink (€1/m). At 0.40 diameter, it’s way stronger and more abrasion resistant than normal carp hooklink. The only reason I don’t say what it is is because if you want to buy some, it comes on 240m long spools! If you still want to buy it, message me and I’ll tell you what to get.

With Luke and Sarah’s wedding coming up, next year’s trip may have to be put on hold but it’s great to know that they had a super holiday and want to return just as soon as they can. Thanks for making more magic memories guys!

Big Double, hard area towards the middle of the lake. Bait boat traps of house pellets and Beausoleil boilies only. Beausoleil rig plus hand sharpened hooks.

Perfect, hot and sunny but not too hot.

Great, (although we slept out most nights so it didn't get much use)

Enjoyed our 2nd visit even more than the first! Weather and the fishing was great and our hosts were fantastic as always. Looking forward to a return trip already! 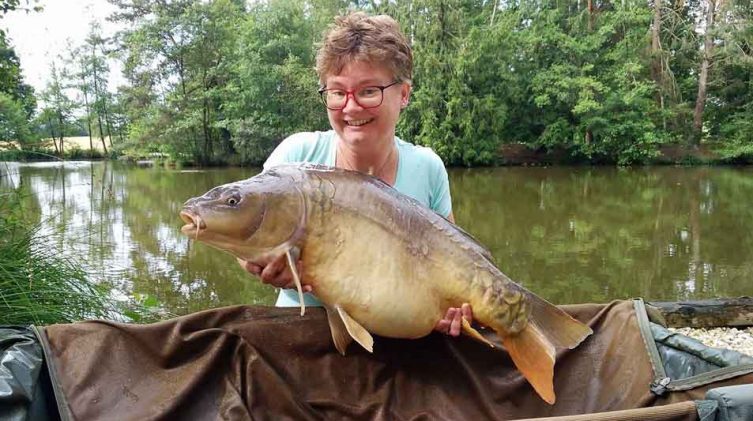 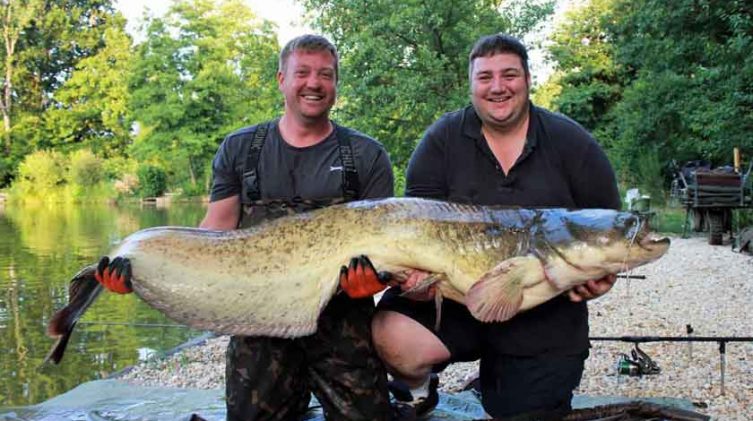