A textbook approach from Rob & Simon results in another fantastic carp fishing week at Beausoleil with carp to 43lbs and plenty of really good 30’s!

This week we had the pleasure of welcoming back Rob & Simon. I reckon this was Rob’s 10th week on the banks of Beausoleil which makes him the most experienced guest we have. Best buddy Simon has joined him on the bank for the past 8 years. As a new addition to the team, Rob’s girlfriend Aga joined the group this year. Aga has no interest in fishing but does love peace and quiet and was very happy with the place.

After a good catchup where the conversation jumped around like a cat on a hot tin roof, we headed off for a tour of the lake. Sign wise there wasn’t a lot to go at and with the last two tricky weeks, I couldn’t really give the guys much in the way of pointers based on recent form. This didn’t bother the guys in the slightest. Over the years, they’ve experienced lots of different conditions and situations and they’ve learnt, sometimes the hard way, how to get the most from the place.

When I came for my first visit, I wasn’t sure what to expect. The conditions were far from favourable with bright clear skies, high air pressure and temps touching 30 degrees in the afternoon. Fortunately, when you’ve mastered the Beausoleil fundamentals like these guys, these conditions can be overcome.

By Monday they’d had 5 bites and banked all of them. OK so one was the world’s smallest catfish and the other was a low double but the others were Dink at 37lbs, another mirror of 32lbs and a stunning common of 29lbs. All bites came just before breakfast on Monday morning during a very short feeding spell. Loving your work boys!

I’ve always said that once you’ve caught your first one, you can catch your 2nd. The mainstay of their tactics were small bait boat traps of PVA bagged boilies and pellets with a few freebies dotted about. Obviously they back that up with razor sharp hand sharpened hooks and super effective rigs. All fish were caught with our Beausoleil baits and freebies 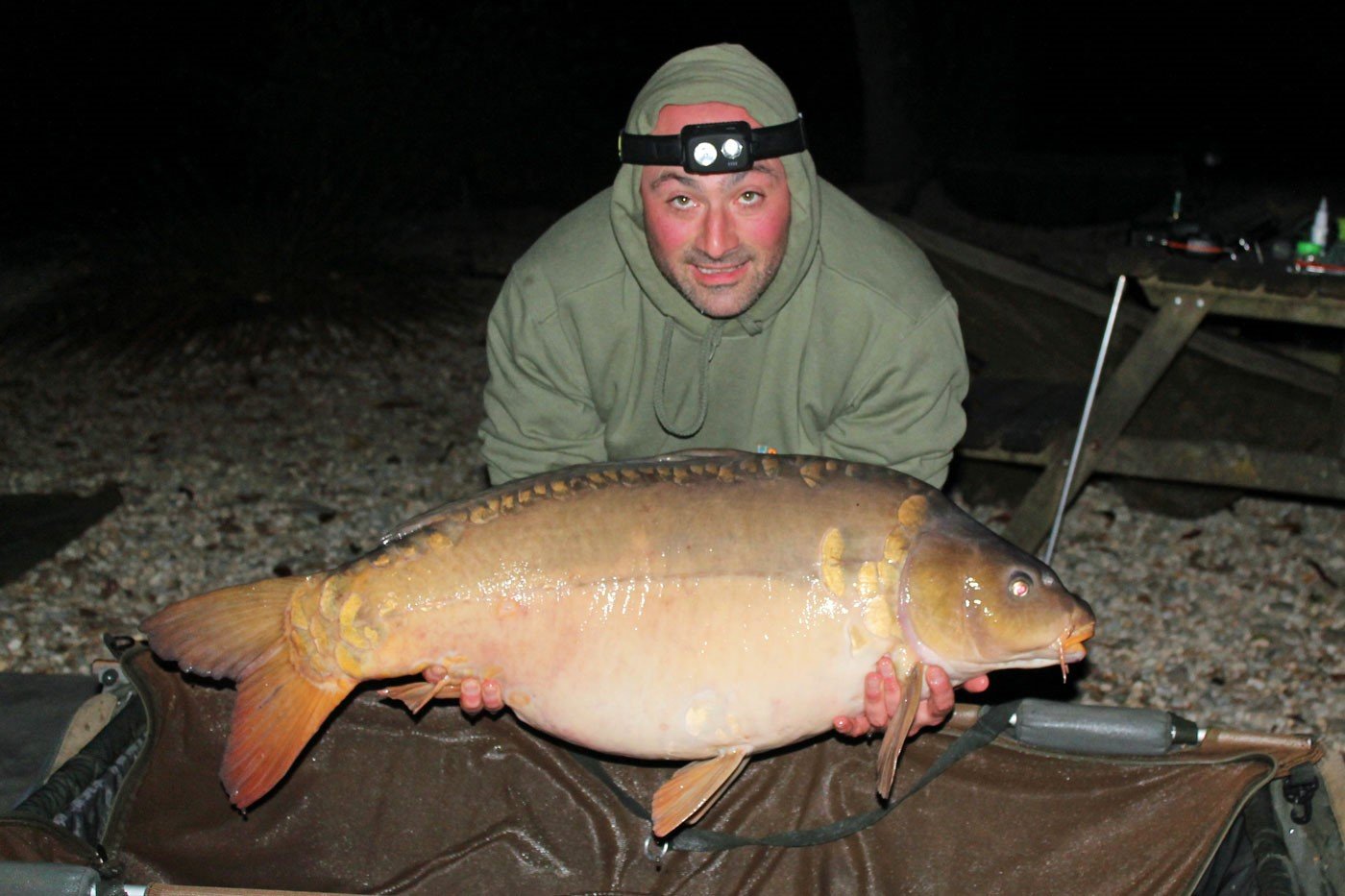 Simon prefers to stick to my original 2 x 20mm Beausoleil bottom bait rig. Rob loves my new multi rig fished as a snowman variant with one of our corkball popups. Nothing fancy, just simple and effective. All they do after each capture is reset and repeat and any rods that aren’t doing bites get moved to spots where fish are crashing. Again, textbook stuff. Although Rob and Simon have never actually done a formal tuition with me, it’s great to see them be able to successfully apply all the tricks I’ve shown them over the years and reap the rewards.

Getting blood from a stone

The guys know very well how much we love the place and how we enjoy the news when I drop by to check oxygen levels (still good by the way). Therefore, they get an enormous amount of enjoyment from drip feeding me with one capture at a time, always starting with any small ones that may have been out of course. After the excellent start, I wasn’t sure quite what to expect on Wednesday. It was such a short window of activity they’d had. Was the window closed or were they still able to work their magic?

The Wednesday update started with another small catfish (bigger than the last one but still more bait fish than specimen), then a common of 14lbs (that’s 2lb up on the biggest baby common I’ve got records of so they are piling on the lbs). Rob then told me all about another 30lb mirror and a 27lb mirror he’d had. 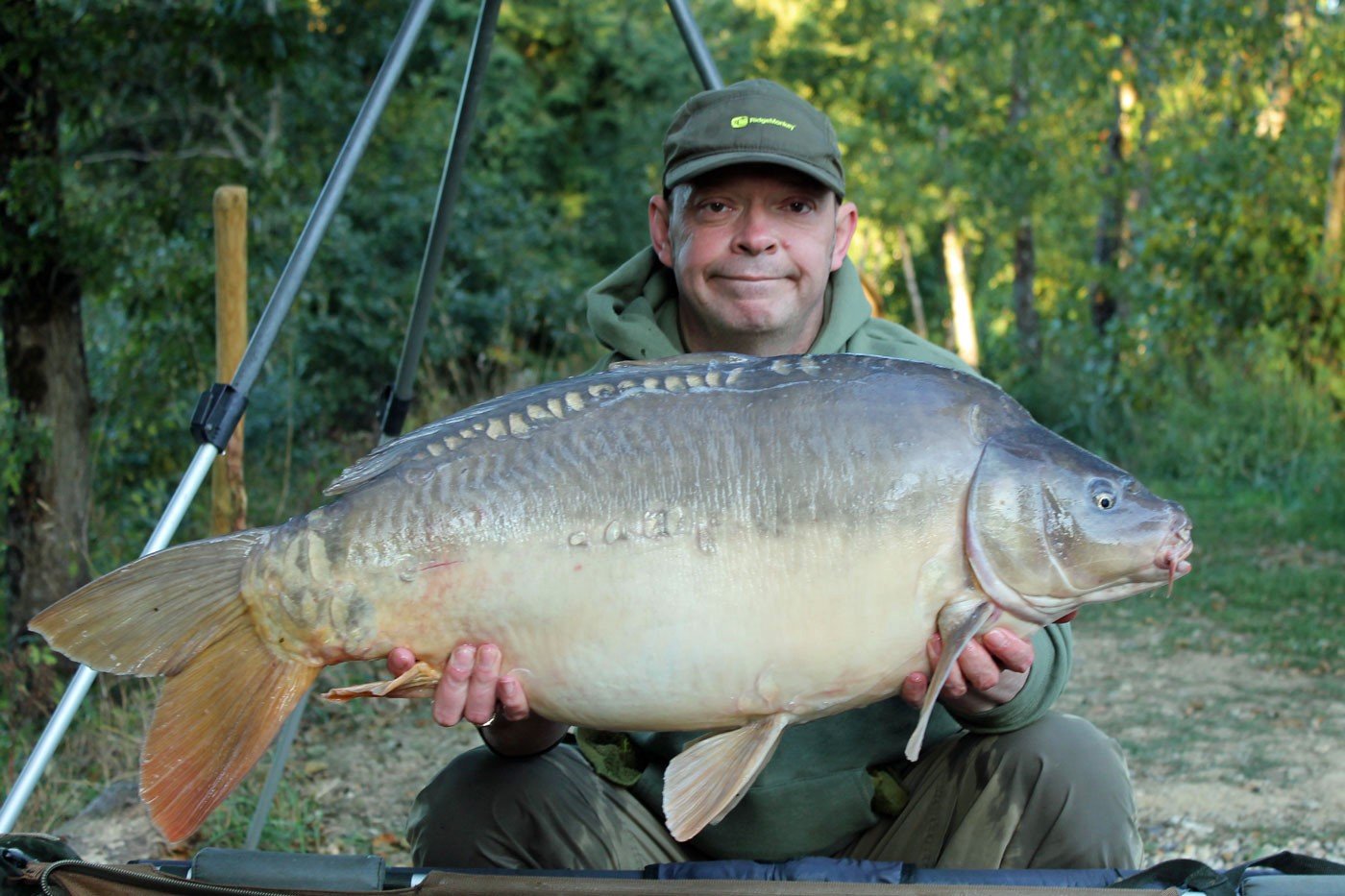 After a load more chat, Simon hit me with a 43lb common that he’d almost forgotten to tell me about (the bugger!).

This was Simon’s first 40lb + carp and he was delighted with it! It could only be Pepe of course. He’d been out in April close to 44lbs but for a September weight this was a really nice gain. He was looking absolutely mint from nose to tail. Bloody brilliant!

Seconds away from failure

Simon came very close to not even getting the bite though. It was 2pm in the afternoon on a warm day with a nice breeze pushing across the lake. This particular rod was targeting an area where a number of carp had crashed out but after giving the spot a really good go, he was literally 15 seconds away from winding it in and trying another spot. In fact he was so close to winding it in, he was standing by the damn rod!

The first Simon knew about the take was not from the sound of the alarm, it was from the mahoosive bow wave that erupted from the spot. The next sign was Simon’s slack line moving from right to left, following the track of this mysterious submarine. Not needing anymore info, Simon wound down and was connected to pure joy! After a very decent scrap, he called Rob over to inspect the prize. Rob knew instantly that there was only one common that could come anywhere close to having that width across the back. It had to be Pepe. 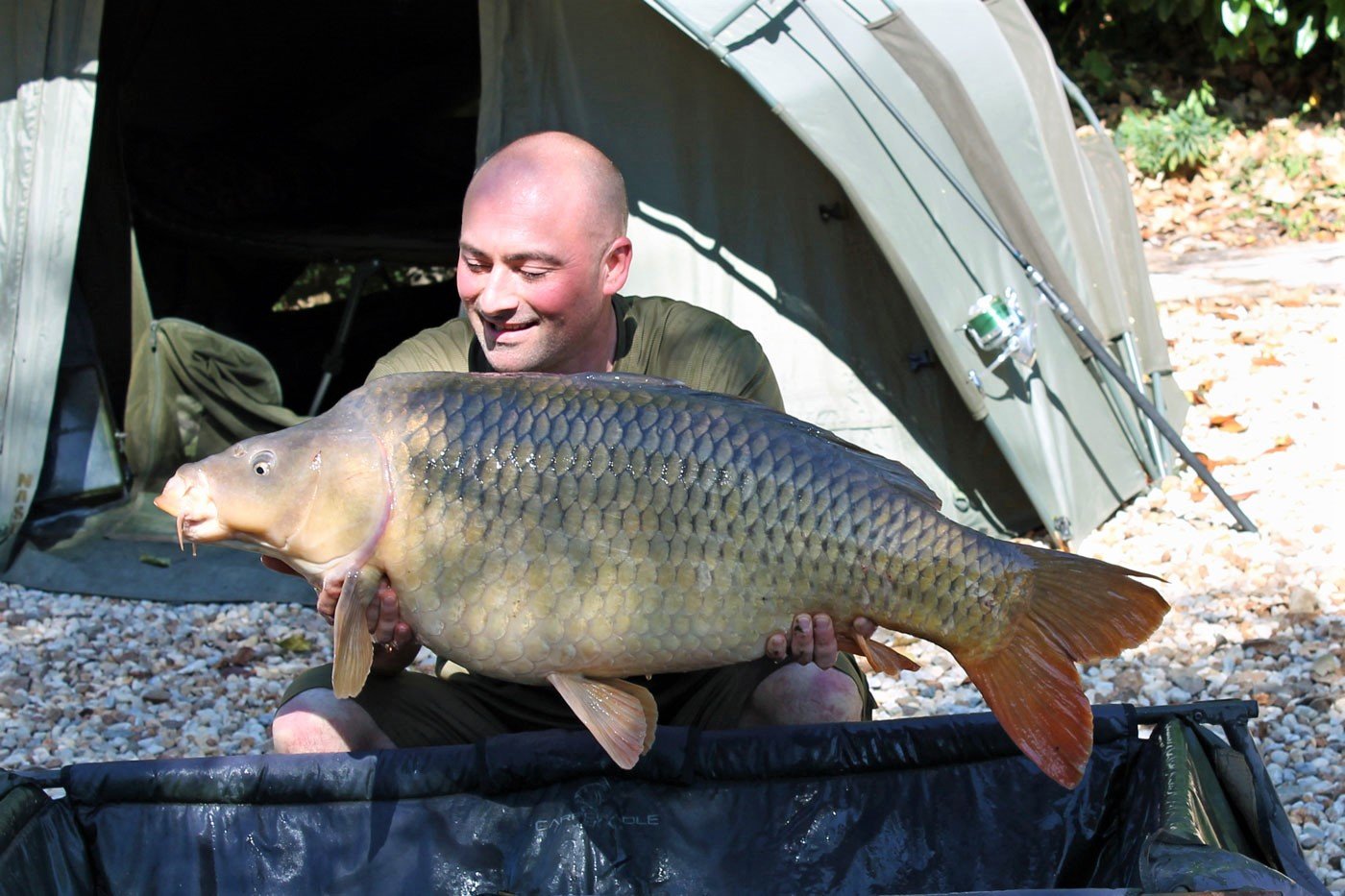 Obviously Rob was miffed (in a jovial way), that Simon had piped him to their first Beausoleil 40lb+ king carp. Rob’s had Perla the big grassy at 40lbs + but not a king carp. Still, it was only Monday.

The following two days didn’t produce a bite for Simon. It was Rob who edged ahead with his steady run of a carp a day.

Session anglers often talk about the myth which is “Big Fish Thursday”. The theory goes that by Thursday you should have got the fish really going on your chosen bait and all the spots are rocking and this is the time when a biggun is going to slip up. I’ve never been a believer in this myth but Simon certainly had a fantastic run of fish on that day, landing no less than 4 carp in the afternoon. One of those fish was a second 40lb carp, this time a mirror called Hyphen. This “run of luck” has happened to Simon before so I’m sure he won’t be allowed to fish on Thursday next time!

A slap in the face

It was all happening for Simon this week. One of the carp was being a right handful in the cradle and while Simon struggled to control it, he was slapped so hard in the face that there was claret everywhere. Fortunately the carp was low in the cradle and Simon (who was literally seeing stars) stumbled away and tried to gather himself. Once Simon had patched himself up, he was able to have another go and successfully photograph his prize. He is still considering legal action against the carp…. 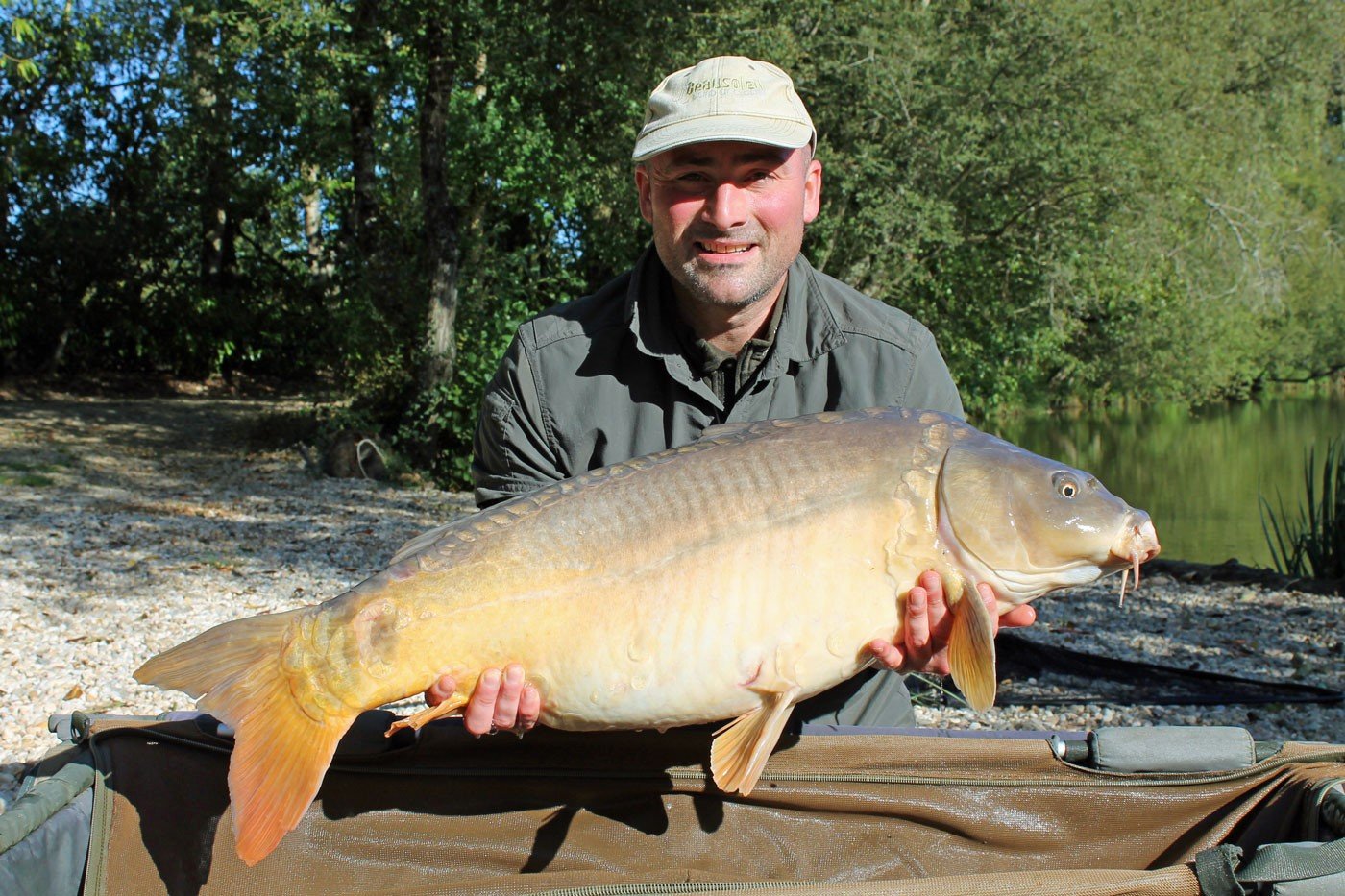 We’ve had a number of groups that have managed the fabulous feat of zero losses during their week long session. Many anglers seem to accept losses as par for the course but actually, if you are methodical about your approach, it is totally achievable. Every bite is hard won at Beausoleil and thanks to Rob and Simon’s dedication and meticulous attention to hook sharpness, knot testing and line inspection, every take resulted in a fish on the bank. Well done guys.

Talking of knot testing, Rob was having a poor run on knot failures during testing so he tried something a little different. Rather than wetting the knot with saliva before cinching it down, he decided to do the pre-tightening under water. The shallow green trays you find on some of our bait buckets are perfect for the job. Obviously you still need a rig puller and a glove. I haven’t tried this yet but following this switch, Rob never had another kettle bell test knot fail on him. I’ll be doing another tuition session next week so we’ll have a go at this.

The conditions this week were far from ideal but it simply didn’t matter because the guys got everything spot on both technically and tactically. This water can do your head in at times but I believe there are always bites to be had, no matter what the conditions, and Rob and Simon yet again proved this to be the case. 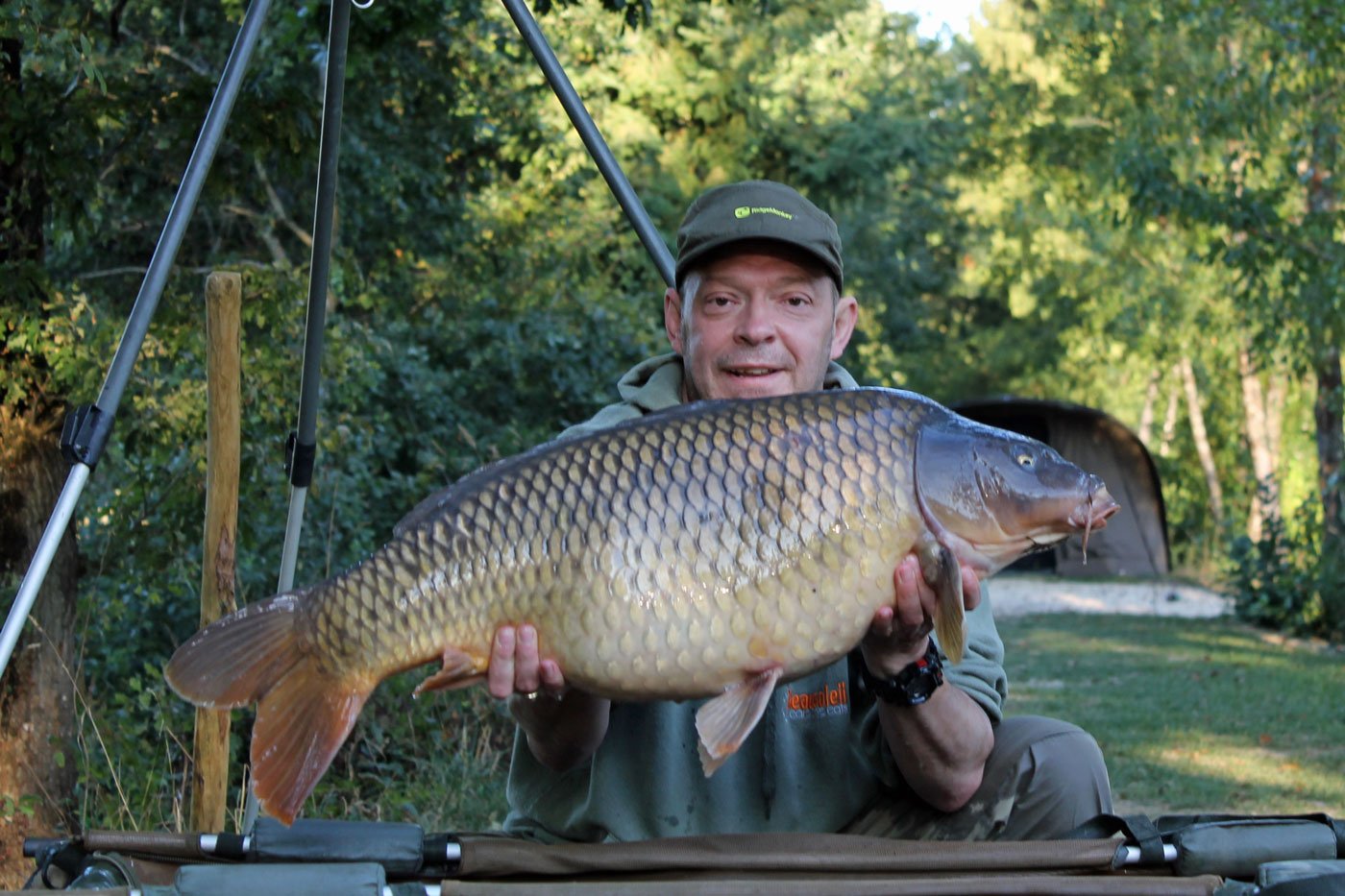 It’s always such a pleasure to watch how these guys go about their fishing and to see them enjoy the intricacies of the lake time after time. Every session is different and they still experience highs and lows. Their secret is the total confidence they have in the Beausoleil set up and methods. They know what works and even if things are quiet for a while, they stick with it no matter what. As a result, they haven’t had a tough week for years. It was a masterclass in how to fish the venue and we are delighted that they’ll be making more special memories here next year. Thanks for the laughs guys.

We’ll finish with a mystery noise …

During their stay the guys noticed one particular tree that made a very regular clicking noise. They came up with all sorts of theories. Rob was convinced it was squirrels playing with their nuts. Just before they left, they dragged me over there to solve this great mystery. I won’t spoil the fun as Simon still doesn’t know what it is and Rob and Aga want to wind him up some more about it! I wonder if you guys can work out what it may have been (hint: it was metronomic in rate, sound and pitch).

Hot and dry with high pressure

A wooden picnic table between the Big Double and Island Point. A couple of mountain bikes.

Another fine week’s fishing given the weather conditions. It was lovely to see Matt and Ren, Beausoleil is truly an amazing place! Looking forward to seeing you next year! 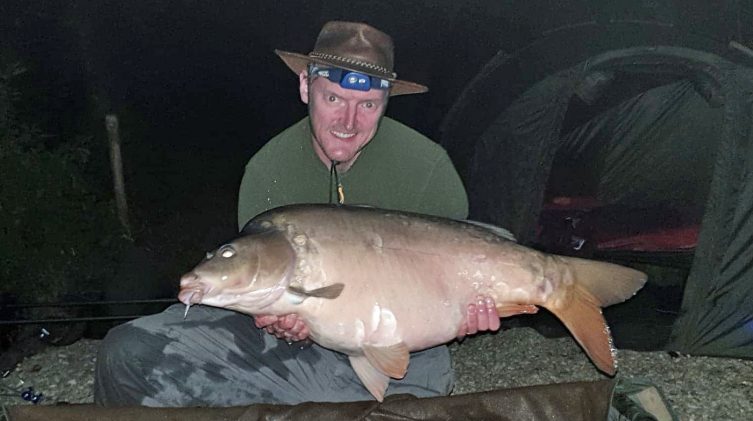 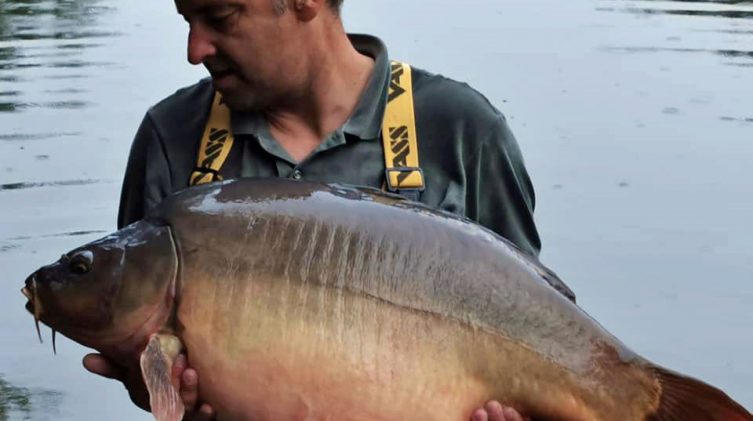