Quality dad and son time on the bank, with one massive catfish and a couple of mid 30’s.

This week we welcomed back Ryan and his dad Dave for another crack at our wily specimens. Beausoleil is a blooming long way from Barnsley but this father and son team were happy to make the pilgrimage in search of more massive specimens. After a very long drive via Belgium, they arrived tired but happy to be here.

It was a wet start of the week, which we hadn’t seen in a very long time, and this delayed the guys getting their camp set.

All quiet on the western front

When I called round Monday, I learnt that nothing had been out and all the guys had to report was loads of bleeps, no runs… I could see from the huge sheets of old bubbles that the fish had been very active and the guys confirmed this. I suspect that they’d probably been feeding heavily on naturals.

Like many of our visitors, Ryan and Dave don’t get to do this type of fishing back home and after going through their setup, it was clear that they were a little rusty since their last visit. We had a good chat and I gave them a few pointers. The head scratching continued but some wise choices lead to two quick captures on Wednesday. The first one came after a carp gave itself away close to the aerator with a few shorts lines of bubbles. 2 hours later, after carefully sliding a rig in place, the bobbin was chomping at the alarm and the result was a nice 34lbs mirror. 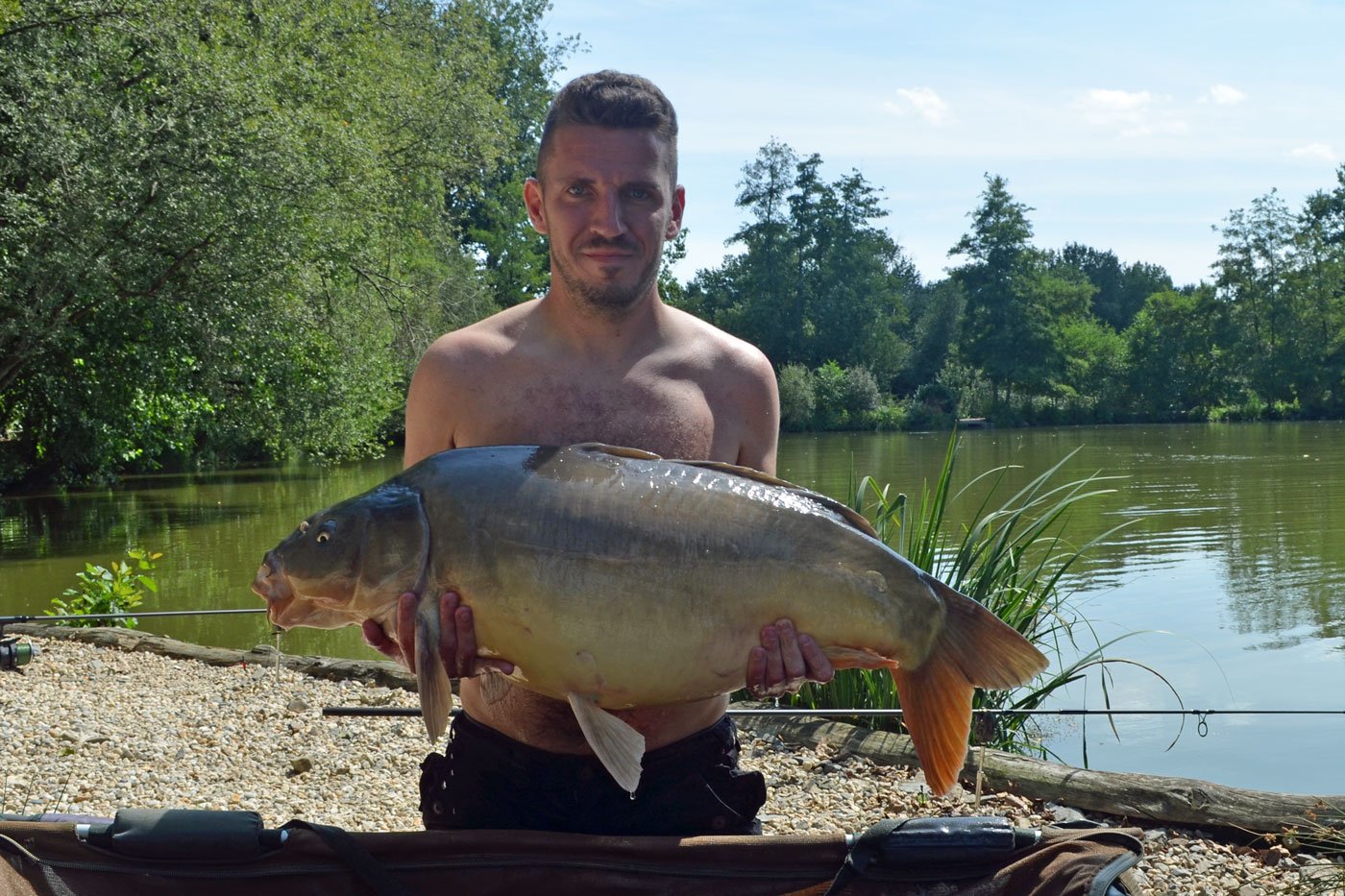 The next chance was created after Ryan chose to target a deeper depression in front of one of the overhanging fir trees. Ryan was targeting the carp with 2 x 20m Beausoleil bottom baits and a size 6 hook. It was therefore a bit of a surprise when he hooked a mega sub! It headed out towards the bridge and Dad was sent round to thrash the water by the bridge with a stick to discourage it from passing under. That plan worked but then it decided to try and swim up the small inlet stream. Ryan had the pickup from point ‘B’ so he was well positioned to apply the brakes but by god they were getting smokey! The next concern was the aerator. Dad was then dispatched to the boat to try and discourage it from that area.

After a good hour, the catfish had been successfully maneuvered in front of the point swims. The relief was short lived though as the massive catfish just powered away from them again, this time into the far corner of the deep end (no carp corner). There were periods of teasing back and more powerful surges. At one point the cat tried to play dead burying its head in the silt. It takes a massive amount of rod pressure to get their head up in this situation. It’s at times like these when you truly understand why we insist on every knot being kettle bell tested. Ryan was well prepared for the fight though as he’d had a similar experience with his first cat last year.

Finally they managed to raise the cat’s head up and they saw the size of the problem…. this thing was massive! It was clear that there was no way they could glove this cat straight up so they went for the draw into sling routine. Top angling and great teamwork, well done guys!

Only trouble is, the cat was so massive, its tail was still poking out the other end of the sling! Ryan and his dad aren’t the tallest of carp anglers and this thing was much bigger than Ryan! Being short on leg, they resorted to standing on logs and shortening the sling to actually weigh it. The guys had zeroed out the catfish sling weight and it then bottomed out our 120lbs scales at around 125lbs. Now, as far as we and everyone else was concerned the biggest catfish we have was 118lbs (in fact we may have two of that size). The guys are not here to break records or claim false glory. Because they really struggled to weigh it and hold the two man bar steady, I’m not ready to call this a new lake record yet. Only another capture will confirm whether a specimen of this size actually exists. In the meantime I’m going to write to Santa and ask for a bigger set of scales for next year…. think we’re going to need them!

Following the epic battle, neither of them was in any state to cast a rod so they retired to the gite for an early evening and had a gentle start the next day. When I called round on Thursday, it was clear that the fish had been very active again. With conditions set to warm up again, bites were going to be a bit harder and so it proved. At the end of the day Beausoleil is the chance to have the holiday you want. It’s not all about catching.

I’m probably going to make myself look old here but you know how it is, you wait ages for a bus and then all of a sudden, two appear! Well that’s how it was on Thursday. They had a pickup from snake bank and all was going well until the fish crossed over another line. At which point the line tightened and they simply assumed they’d got things tangled up. As the line angles diverged rather than converged it suddenly became clear that they actually got a double hook up! Ryan successfully landed the first one but in the melee, Dave bent down to pick up the other net, let the line to the fish he was playing go slack and that was enough for the carp to shed the hook and be back on his merry way…. ouch!

Ryan being the kind and generous son he is let dad have his picture taken with the carp that was landed. He did confess he secretly regretted that decision as it was an absolute beauty! The guys said that no photo can do these fish justice. Their size, and majesty can only truly be appreciated in the flesh. 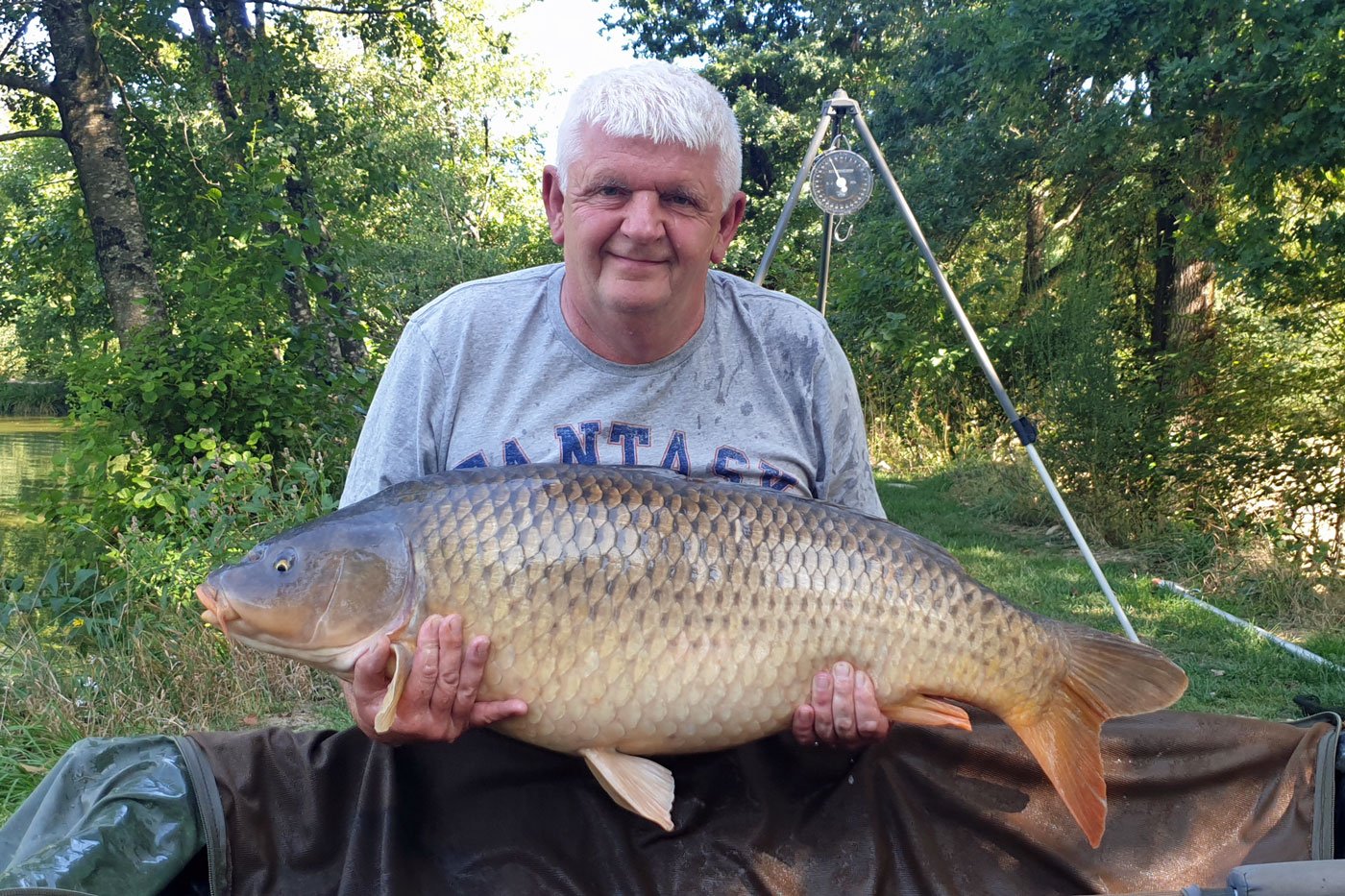 Putting in the graft

The guys did work at their fishing and were diligent in their approach. The line between success and failure here continues to be very thin. If you think I’m magically able to join the dots everytime here, then you’d be wrong, although I always believe that there is a least one bite to be had every night. The guys have already discussed returning next year and are also planning to book me for a tuition session to help close a few skill gaps. The help I can provide during a midweek visit is just a fraction of what we cover in a proper full day session. Practicing these skills while I’m there makes a massive difference as it’s only then that we can see if mistakes are being made and correct them.

It was great to see them again. It was a real shame that it didn’t quite happen for them this year but I’m very confident that they have the necessary skills to get to grips with this venue. That catfish was definitely a fish of a lifetime and the carp were absolute stunners. They have absolutely no interest in fishing runs waters, they enjoy the challenge of the venue and that’s what matters. Unlucky fellas, until next time!

Ryan and Dave
Dates at Beausoleil: 17th to 24th August
Number of anglers: 2

We are not the tallest of people so we had to stand on the log stumps to weigh the cat. We are not 100% sure the fish was fully off the floor. After nearly 2 hours of fighting, we were both beat. We are a little disappointed compared to last year (10+ fish) but the cat made it worthwhile. Smashed my France PB. Thanks to Matt and Ren for being wonderful hosts. Listen to Matt, he knows his stuff. The fishing was difficult, not much activity with regards to fish feeding etc. Oxygen levels weren’t the best. We will return however :) 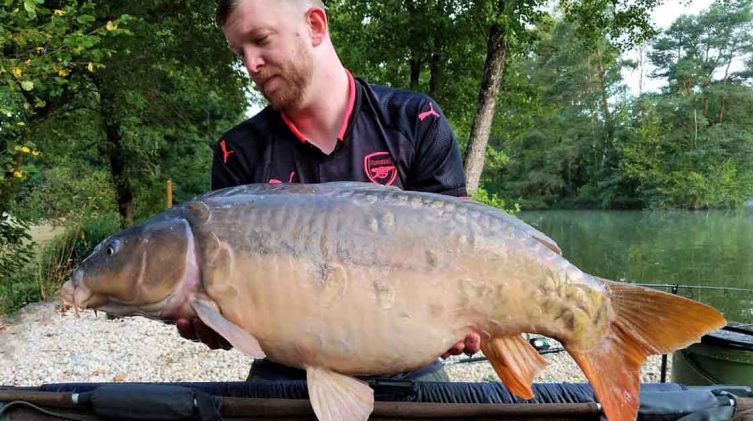 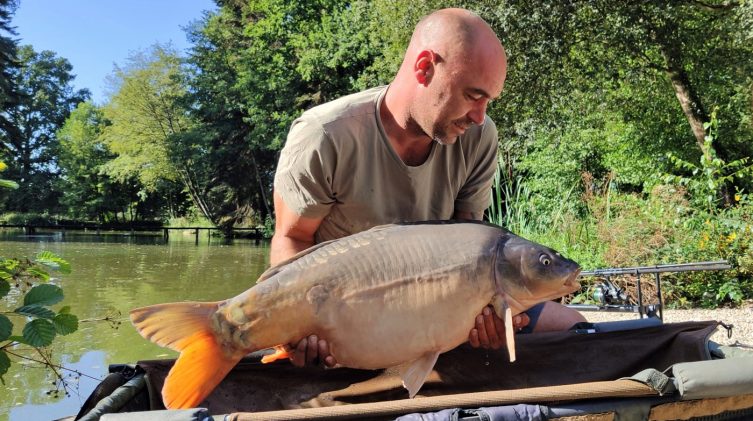