A great week’s fishing for two old friends with multiple PB’s, a massive cat  and lots of sun!

This week we welcomed Andy and Rick back to the venue. They first visited us last year with their friend Jules who unfortunately couldn’t join them this year. I did a full tuition session with the guys last year and this year they were determined to put it all into practice.

Andy had a really tough session last year. I’m not quite sure why but somehow it didn’t happen for him. That experience didn’t stop him coming back for another crack though. If you’ve never suffered a long blank session then you just haven’t been stretching yourself or fishing for long enough! So it was fantastic to see him cradling a big chunky mirror of 38lbs just 24hrs after arriving. That’s a way to get off the mark!

Last year Rick managed a last gasp chunk so there wasn’t as much pressure on him to catch. Not that he didn’t want to of course but he really wanted Andy to get one first. So when that box was ticked it was time for Rick to join the party! The guys are not used to doing the nights but this year they were determined to push themselves out of their comfort zone and do some proper night fishing. It’s a big step for any angler for sure (I know it was for me!)

2nd outing at Beausoleil…and again hats off to the owner, Matt Collins for his stunning lake and the highest quality fishing. Two of us fished 6 days catching 520Ibs of fish, with nearly all being 30-39Ibs & 100Ibs + catfish. We studiously applied Matts’s tuition from last year and were richly rewarded. When not fishing we were totally chilled out by the vibe of the place and the quality of the accommodation. Beausoleil first visit was very challenging compared to our recent visit which makes this water all the more compelling. We are now counting down the weeks until our next visit…

The guys had very modest goals for this year.  A couple of fish a piece and they’d have called that job done. Little did they know what this water is capable of if you get everything right. The lads diligently applied “the Beausoleil method” to the letter and the results came without even trying. They caught every day and they never lost a fish. Okay they lost one but Rick was left holding the two rods that bust off simultaneously while Andy was in the house!

The average size was off the scale with plenty of mid to upper thirties. They only ended up doing one night in the end. They were catching during the day so why bother?  They didn’t even get up at the crack of sparrow and I don’t blame them. It’s a holiday after all!

The first 100lbs+ catfish of the year and a little tour around the lake! 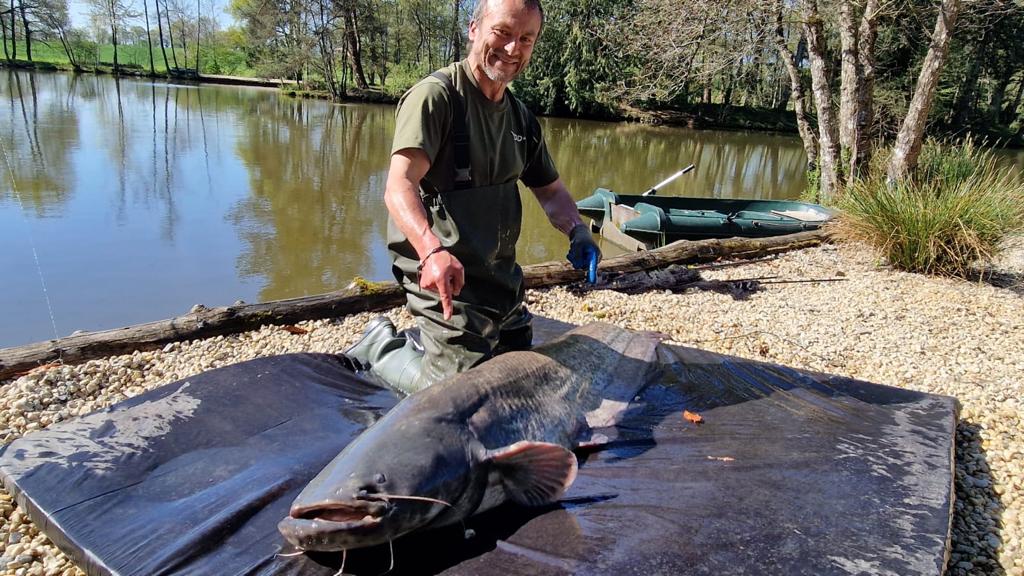 As if catching carp after carp wasn’t enough, they also managed to get the full Beausoleil experience with one of our massive catfish. Things went sideways quickly when the cat headed off beyond the end of the island and powered off around the back. Only some very quick thinking saved the day and they knew it was either take to the water (in the boat) or lose the fish. They just about managed to keep the line off the massive rocks that hold the end of the island up and then proceeded to be towed around the lake!

Rick was on the oars and he quickly understood that he was not in control of the boat. There was very little Andy could do on the rod end either. After a full tour of the lake, under catfish power, the cat headed back towards point C and they were able to disembark and continue the fight from there. With the cat already tired it was only a matter of time (50 minutes total) before they won the day.

On the scales it went 116lbs. That is one seriously massive animal. It was a fantastic piece of angling by both guys. These situations don’t always end well so bloody well done. Now you can tell the tale of the one that didn’t get away!

Tools for the job

It’s all very well having the right rods and reels but if your terminal tackle isn’t up to scratch then your results will suffer. Nowadays, like Andy and Rick experienced, you might only get one chance during a week to bank such a big catfish so it’s vital to get everything right.

After last year, they came armed with plenty of the Nash size 6 chod Twisters (which we stock onsite btw). We resupplied them with some 35lbs Armourlink at the start of this session as they knew they wouldn’t have enough. The guys used my super simple Beausoleil rig (single bait, rather than double) and hooks were hand sharpened when necessary. All the fish were solidly nailed on this classic setup, including the massive catfish.

I know it’s hard for dedicated catfish anglers to wrap their head around the fact that we use a size 6 Twister for big cats but we do and it works great! These hooks are strong enough to tow two grown men around the lake for nearly an hour and the Armourlink can carry that sustained load and the abrasion that comes with it. That’s a serious test!

Bait for the week was the Scopex Squid flake and boilies with a bag of our catfish pellets. This killer combo accounted for all the fish caught. Baiting was simple traps of boilie/pellet mix. This year the guys used a bait boat to drop traps with precision but only after spots were carefully surveyed by boat and prodding pole. 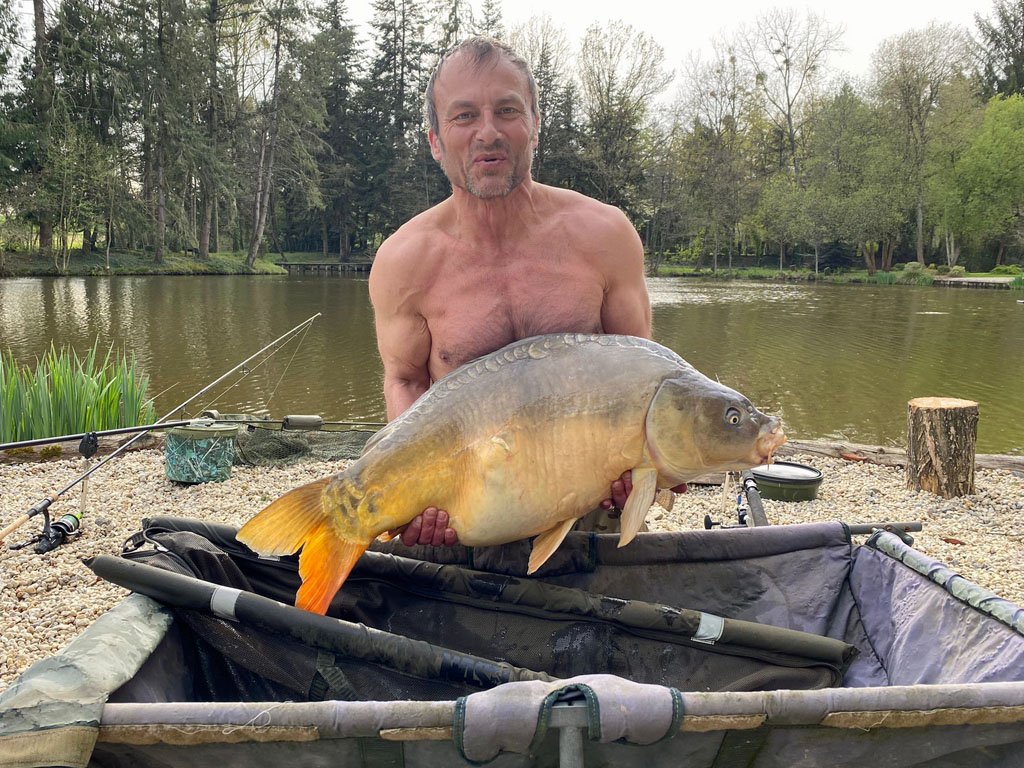 What a way to finish

I caught up with the guys for a good catch up right at the end of the week. While I was there I set up two new camo cradles which had just arrived and jokingly asked Rick to catch a carp for us to christen them. Superstar that he is, he did and broke his PB again! Top angling mate. I can feel your buzz from here!

🎥 If you’d like to learn a bit more about the simple but highly effective rig we use here, here’s our latest YouTube video with a full “how to” for a catfish rig.

One day of rain, otherwise warm and very little wind

Very good, hadn't worked out the shutters as no curtains.

Little to add as spot on in so many ways. More pillows for bed.

The fishing was off the scale, every day we caught fish. We caught fish from 5 different swims. Thank you Matt for your support and tuition last year and before our trip, our fishing has improved immeasurably because of this, and frankly, we are still trying to process what we have caught!
Share this - 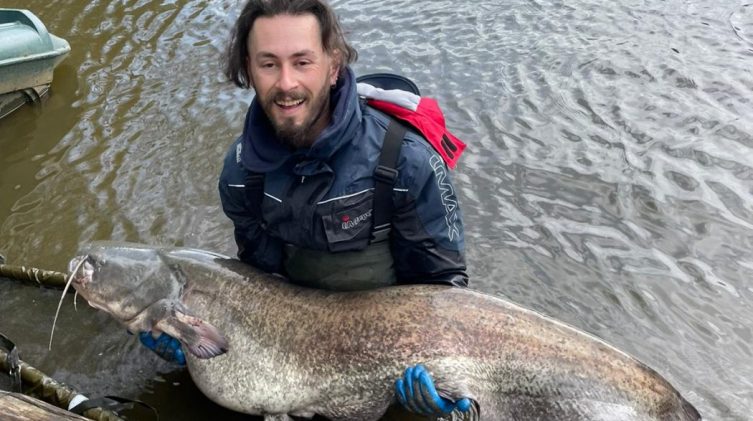 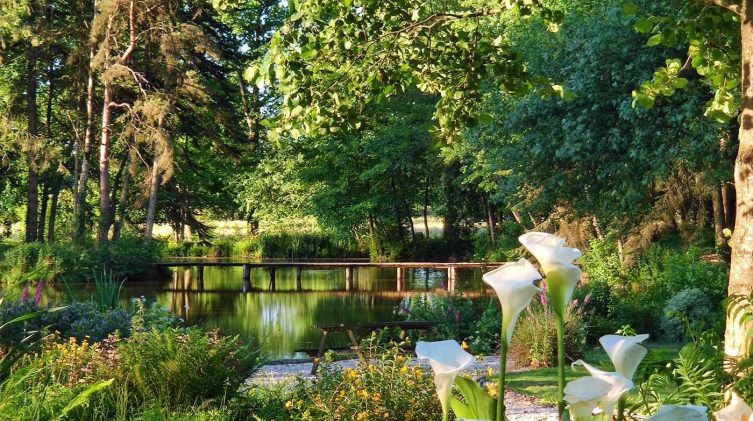