A wonderful family holiday with a nice haul of big carp to 46lbs!

This week we welcomed a father and son team of Dale and Dan along with Dale’s partner Candice and Jessica. After a long wait the guys were very excited to arrive and take in the special atmosphere which is Beausoleil. They guys had booked me for a tuition on Sunday so after a quick lake tour we left them to settle in.

Tuition was invaluable, especially the rig making and boat lake tour with Matt to find the spots. As a result of this session, we were far more confident catching fish. Thank you Matt & Ren for an amazing holiday! You couldn’t have been more helpful or friendly and all your recommendations were brilliant!!

As I’d got the chance to fish myself the week before, I knew what was going on and I’d worked out a plan that I hoped was going to make their week more successful than my own. If you missed it, do read the July Update because it contains lots of good insights into what’s been happening of late. I’d experimented with adding particles to my mix and the guys were open to the approach so they took 4 small jars to add to the Scopex Food packs. This boosted grubbing mix helped keep the carp over the spots for even longer and I’m sure helped put some extra carp on the bank.

I made the decision (with Dan and Dale’s permission) to make the day more focussed and less general than the “normal” tuition sessions. I had some very specific methods I wanted to go through in detail and it was going to be difficult to fit it all in otherwise. Massive thanks to Dale and Dan for going with me on this one as my approach was going to be very different to their normal style of angling in many ways. Dale and Dan are both experienced anglers but mainly used ready rigs in the past. Dan had experimented a little with rig tying. For Dale, this was going to be a whole new aspect to learn.

The day whizzed by in an absolute flash and the guys soaked it all up like sponges. Dan was hoping to get the rods out that evening but the guys had a family BBQ planned so the fishing would have to wait until Monday. 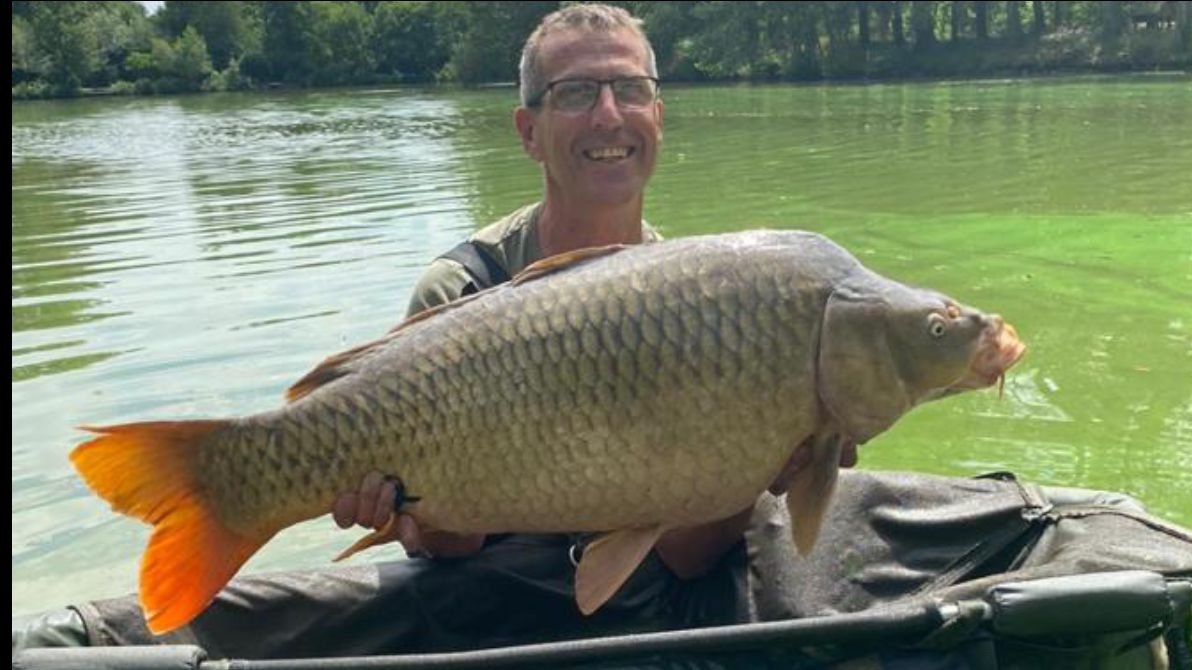 Dan was first off the mark with a nice common of 27lbs. This was a positive sign of good things to come and they’d only had the rods in since 4pm so it was very early days.

In this warm weather, the carp have been having a lovely time down the shallow end during daylight hours. I’d had a go for them myself down there but despite my best efforts I couldn’t connect the dots. It was these failed attempts that lead me to some interesting insights though.

Guests rarely fish from the home swim. I explained to the guys that a stealthy approach is fundamental there and they opted for bait boat traps of the Scopex grubbing mix, boosted with some of the new Nash particle range. The boat was driven out as discreetly as possible to the zones where the carp were the most active. 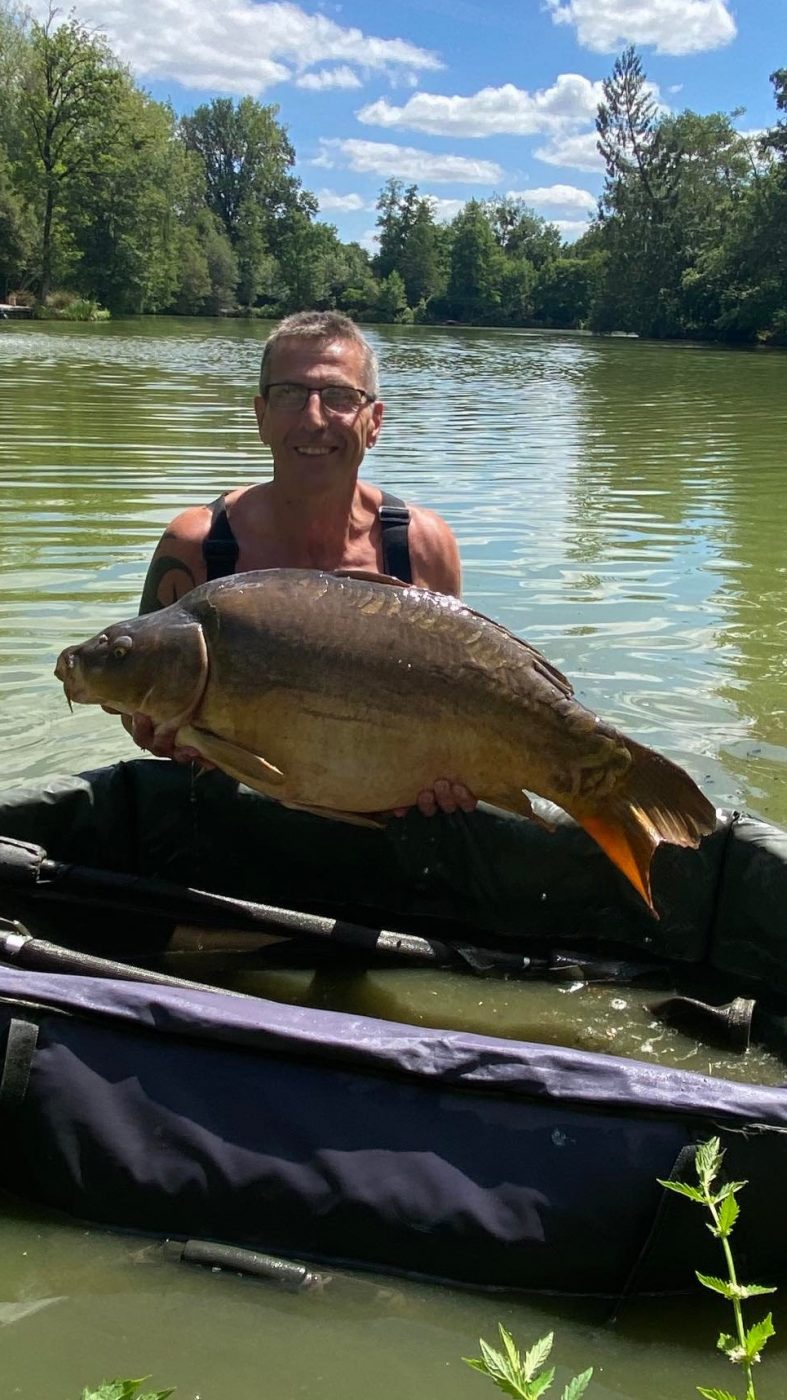 Just 10 minutes after dropping the traps, one was away and connected to the Dark Knight at 37lbs. What a way to get off the mark!

I believe a key reason why they had success so quickly with this approach is that they kept disturbance to an absolute minimum. In fact they only used 1 rod each which is unheard of!

I love it when a plan comes together and so do Dale & Dan. Over the next few days they racked up some absolute crackers including the mighty Pepe at 46lbs. Either the fishing had softened up massively or the new tweaks were working like a charm. Overnight the activity had slowed in front of the Big Double so rather than shuttle back and forth between daytime and nighttime swims, the guys moved everything down to Home swim. Dan had the very rare common known as the Phantom at 34lbs and Dale met Galaxy at 36lbs 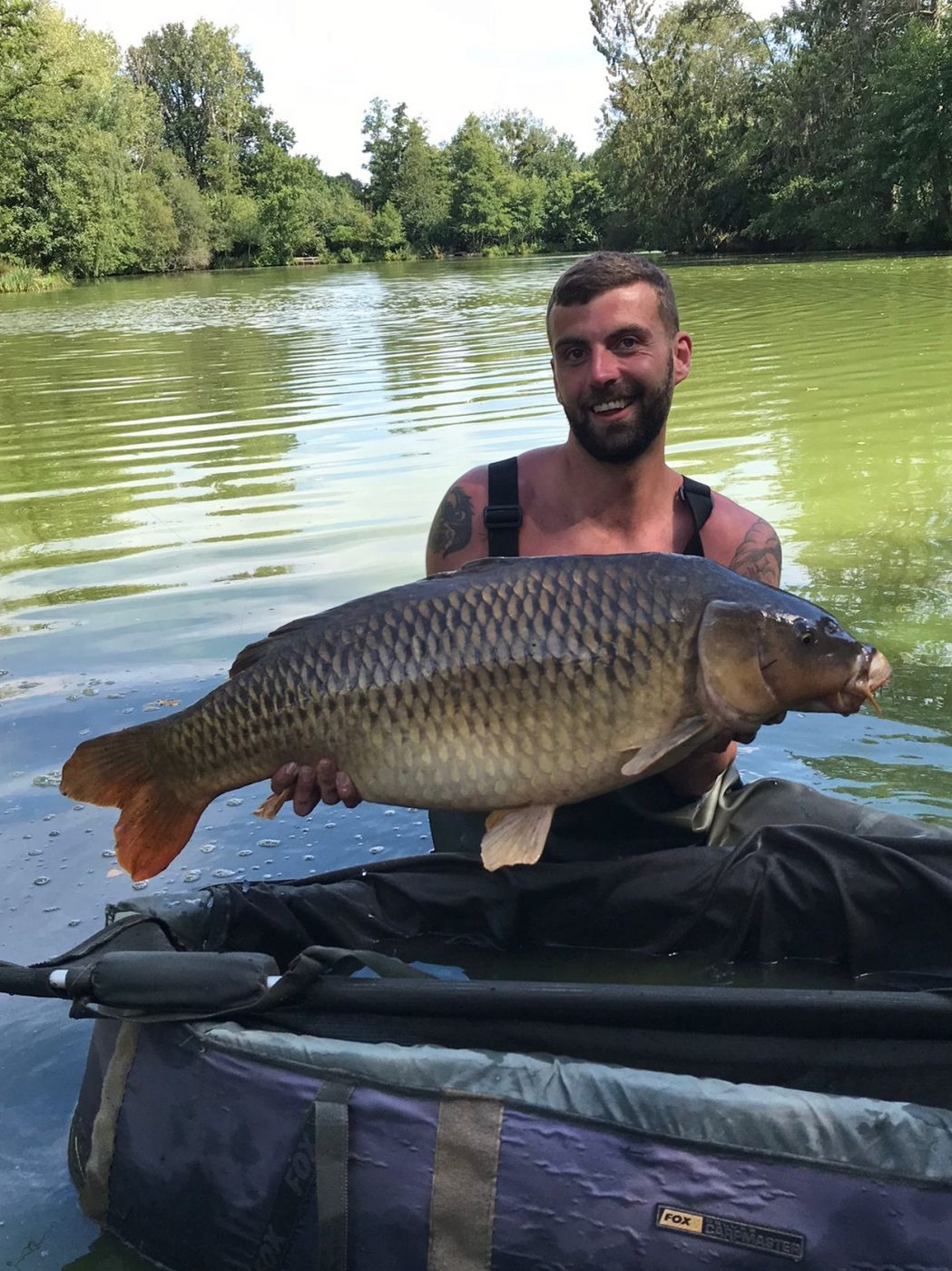 On the bait front the guys fished with the Scopex food pack along with a few jars of Scopex Hemp and Mixed Seeds. Tactics wise it was small bait boat traps of grubbing mix that produced every bite. On the rig front the guys went with my heavy duty mono rig, fished with a 15mm wafter. Lead system was the original Beausoleil inline setup set to be free running, rather than semi fixed. 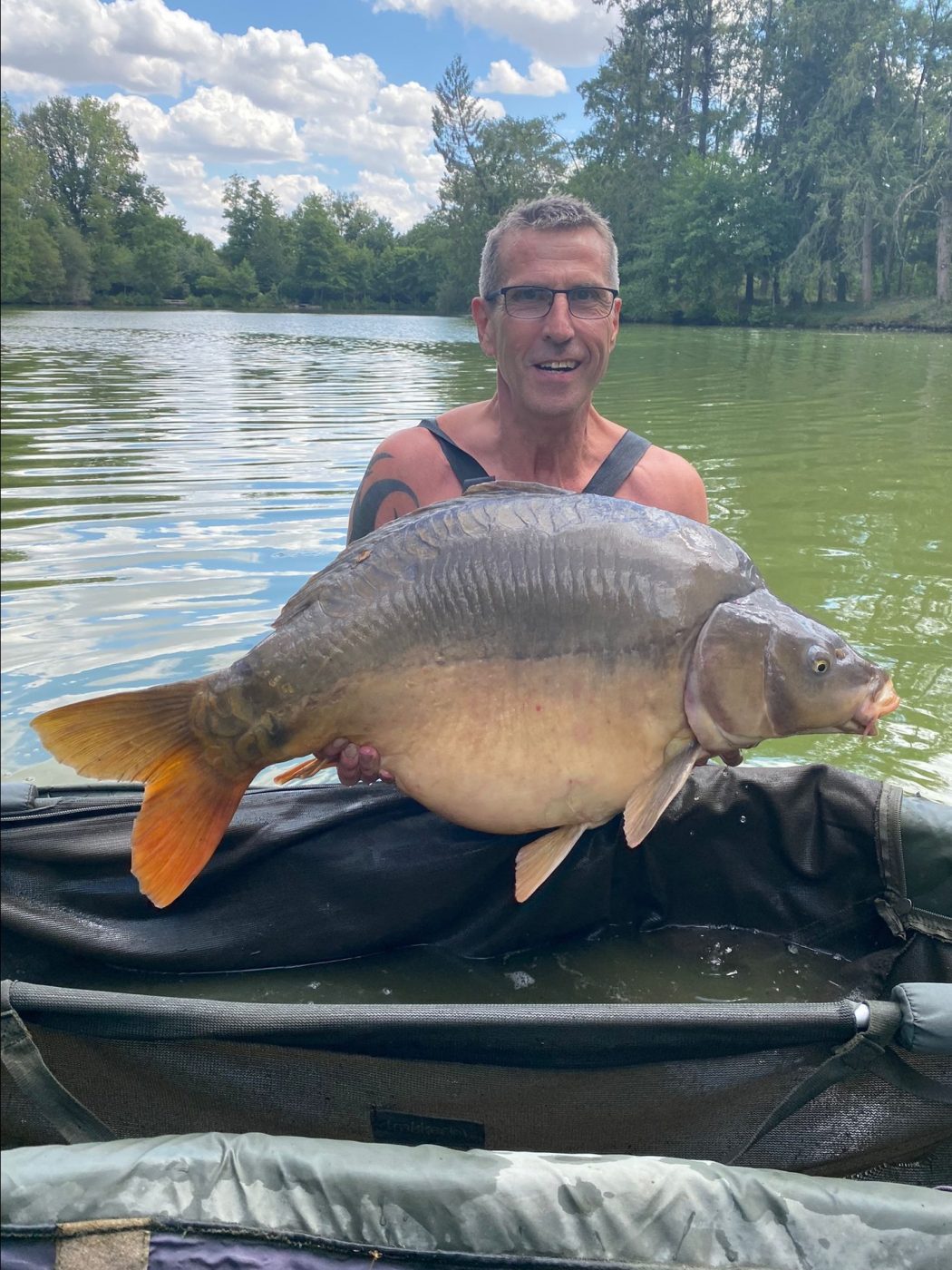 It’s an absolute myth that barbless hooks are a cause of hook pulls and this week was yet another week of zero losses for a tution group. I’ve always said that hook pulls are a perfectly solvable problem and it’s great to see a group make “zero losses” a reality for themselves. Excellent work chaps!

Fun for all the family

Candice and Jessica had a super lovely time as well. Candice is a keen photographer and spent many happy hours wandering around the venue capturing some of the many delights the lake has to offer. We even organised a horse riding session for them which they thoroughly enjoyed. We are delighted that the guys had such a special holiday with us, thank you for trusting me and going with the plan. It was special for us too!

In this video I run through my whole approach to catching wild river carp as well as sharing some very special moments that I’ve had over the last few years.

Perfect, has everything you need

Absolutely nothing, it was brilliant!

Tuition was invaluable, especially the rig making and boat lake tour with Matt to find the spots as the lake bottom has many different areas. Aerobic + anaerobic silt and hard spots. As a result of this session we were far more confident catching fish. Thank you Matt & Ren for an amazing holiday. You couldn't have been more helpful or friendly and all your recommendations were brilliant!! 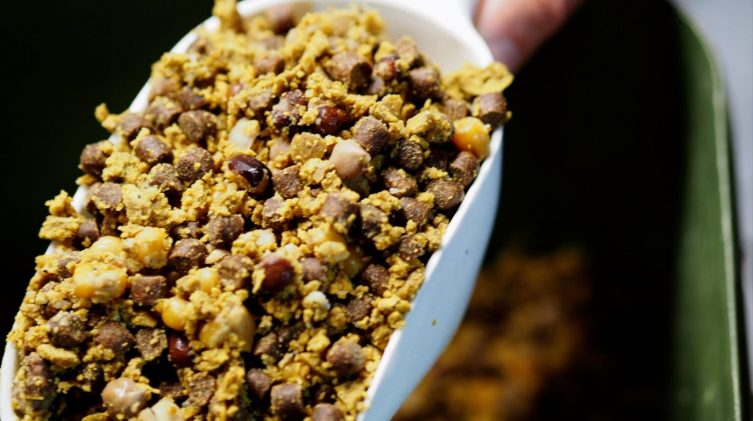 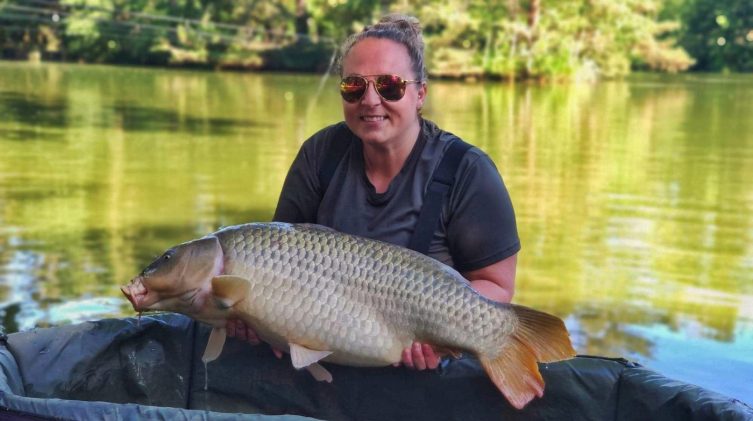