An amazing fishing adventure with lots of carp to 50lbs!

This week we welcomed Des and Mark along with their wives Julia and Melanie for their first carp fishing trip to France. Des and Mark had done a serious amount of research before arriving and were very well prepared. They’d also opted to take the tuition package so that nothing was left to chance. We never tire of the positive feedback we get from first time visitors and there’s always lots of ooh and ahhs. It’s why we love our jobs. The ladies were very happy with the lodge. We live there in the winter so it’s very much a second home for us. The ladies would be taking themselves off on trips out every day while the boys got the time to totally immerse themselves into the fishing.

What a place! Incredible venue, immaculate fishing and very hospitable owners Matt and Ren, thank you for making our stay so special. We opted for the tution which I’m sure gave us the knowledge and skills to catch more fish. Matt’s enthusiasm and skills are simply immense. What we learnt from this trip will see us progress in our fishing skills back home. Thank you for the memories and will see you both soon!

Off to a flyer!

Within a few hours of arrival, Mark was already ‘off the mark’ with good old Sammy. It was a very positive sign and little did we know that this was only the beginning of a great week’s fishing!

Des is a catfish angler primarily but he’s not exactly a novice when it comes to carp fishing. He’s used to chasing carp and cats on tougher syndicate waters. Mark is a very experienced coarse and match angler but a novice carp angler, only taking to the sport 12 months ago. With a PB of 16lbs this was going to be a steep learning curve but he was uber keen and ready to learn!

As usual we kicked off with a little carp science and we blew a few carp myths away. Then we took the boats and the guys learned just what a complicated little lake this is and how it can really catch out the unwary. After lunch we got stuck into the technical elements and really drilled down into the details of the last yard which is the most important part (IMO). They absolutely loved my new mono rig which I’ve been working on quietly for some time. They found it easy to tie and preferred the way it boomed away from the lead.

They were most intrigued to learn more about the new particle approach I’ve been working on. Now that we are able to offer guests pots of Oily Hemp, Large Seed Mix and Sweet Tigers, this has opened up a whole new method of fishing.

Des & Mark were two of the most talented anglers I’ve worked with and we flew through the program. So much so that by 3pm they were ready to start dropping rigs. It’s rare for me to have the time to do this but it made perfect sense. Des was happy with his plan so I spent the time with Mark as he was going to be breaking quite a lot of new ground. The introduction of a rowing boat into his fishing was a biggie! By 5pm they were all set and I hadn’t been back home long before Mark had struck gold in the shape of a feisty 30lb common. Nearly doubling his PB on the first try is crazy but such things are possible here. Mark went on to rack up three more by the halfway stage which was great to see.

Close encounters of the moggie kind

Des was really after one of our massive catfish but they’d proved rather elusive of late. The small ones are easy to catch but that’s not what he was after. He wanted a monster. He was properly tooled up for the job too with a full set of catfishing rods and reels as well as a full set of carp rods. Yep, seriously well equipped! It was great to learn how, through the power of YouTube, Des totally understood why I advocate small, sharp carp hooks for catfish. He’d witnessed something very similar at his syndicate, it’s often the carp anglers that catch the catfish while sometimes the catfish anglers can struggle.

Des experimented with my heavy duty mono rig and he hooked a couple of cats on it but unfortunately the knots gave way. I still don’t fully understand why because I don’t see how a knot that passed our kettle bell test can fail on a fish but lost they were. After that, Des switched over to 35lb Skinlink multi rigs which are an excellent choice especially for the cats. 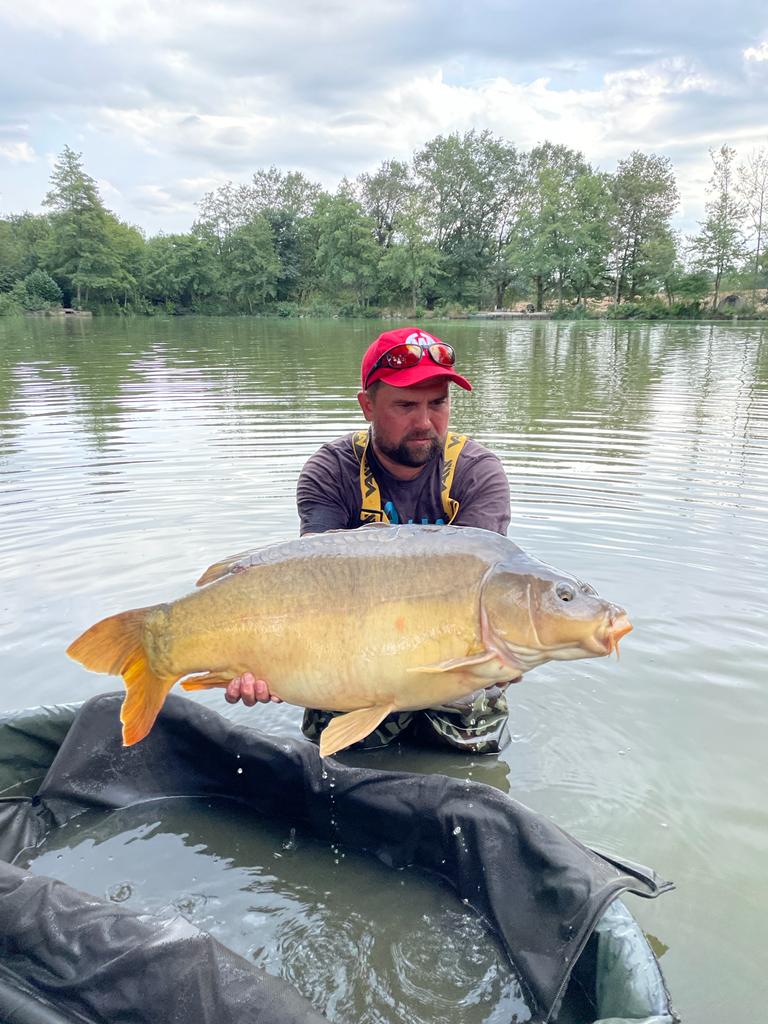 If you can’t beat them join them

It was obvious to Des that the catfishing was going to be much harder going than hoped for and with Mark getting really consistent results on particles, it made sense to join in the fun. Again it didn’t take long for the magic to happen and Des was off the mark in style with a chunky mid thirty. Des worked really hard at his fishing. Although he was based in point ‘C’ he made the effort on two nights to target the massive fir tree cave. It’s often avoided as it’s a bit do or die but Des was confident in his abilities and was rewarded with another really solid upper thirty. This common went so hard he was convinced that he’d finally hooked the catfish he was after. He was using 5lb TC catfish rods and massive donkey Choker pellets but our carp have big gobs and will slurp down a 40mm or even a 50mm bait no problem at all. He was amazed when a carp popped up rather than a catfish but sometimes you just can’t pick ‘em. 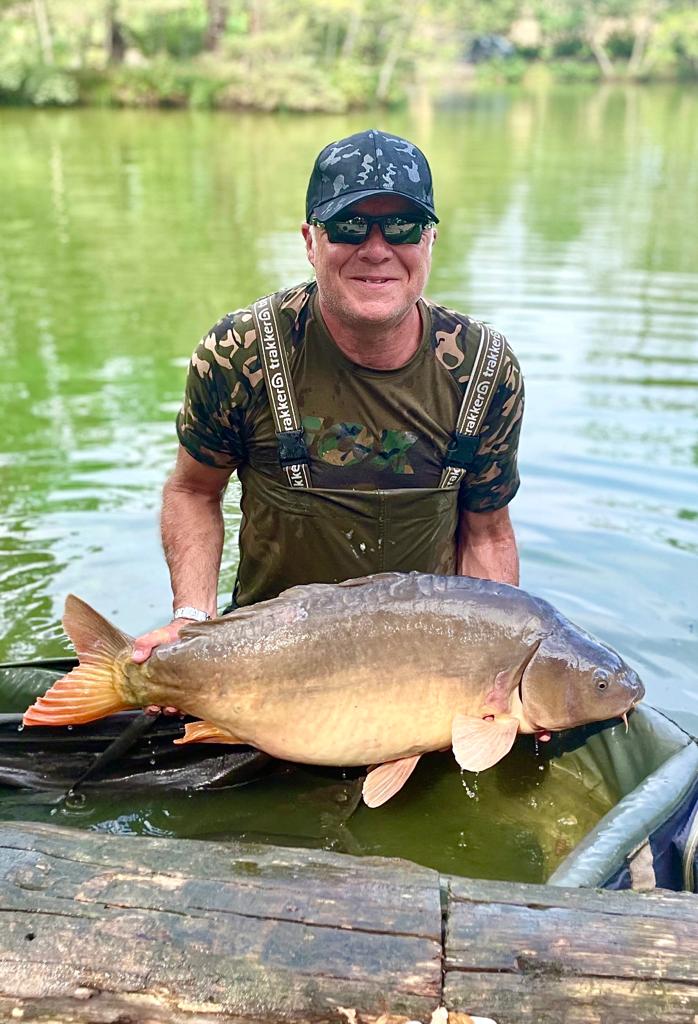 Smashing it out of the park

Mark’s objective for the trip was a 30lb carp and with 4 under his belt already it was very much job done on that front. The trouble with fishing is that you always want something a little bit bigger so his next target had to be a 40. He came very close when he banked Lilly who was last out at 39lbs 12oz. We asked our guests  over the summer not to take the carp out of the water in order to minimise the stress on the fish. We are also asking that all photos are done in the water. Thankfully we were able to ID her from the photos supplied and so we know roughly what each one weighs.

When I popped round on Thursday to check the oxygen after the storm we chatted about the prospects of a 40+ carp. Nowadays it’s pretty good with over a dozen specimens hitting the magic number. It’s harder during the summer to catch a 40 for sure. Then I joked that a 50 was totally possible. I mean, who needs 40s? Little did we know that just a few hours later, Mark would be cradling the carp of his dreams. He only went on to catch Mr. Angry, the king of the pond. He’s been out a couple of times this year, not once below 50lbs (51 at the last weigh in) so although he wasn’t weighed I’m very happy to put Mark in the 50 club fair and square – congratulations mate on this unforgettable capture. 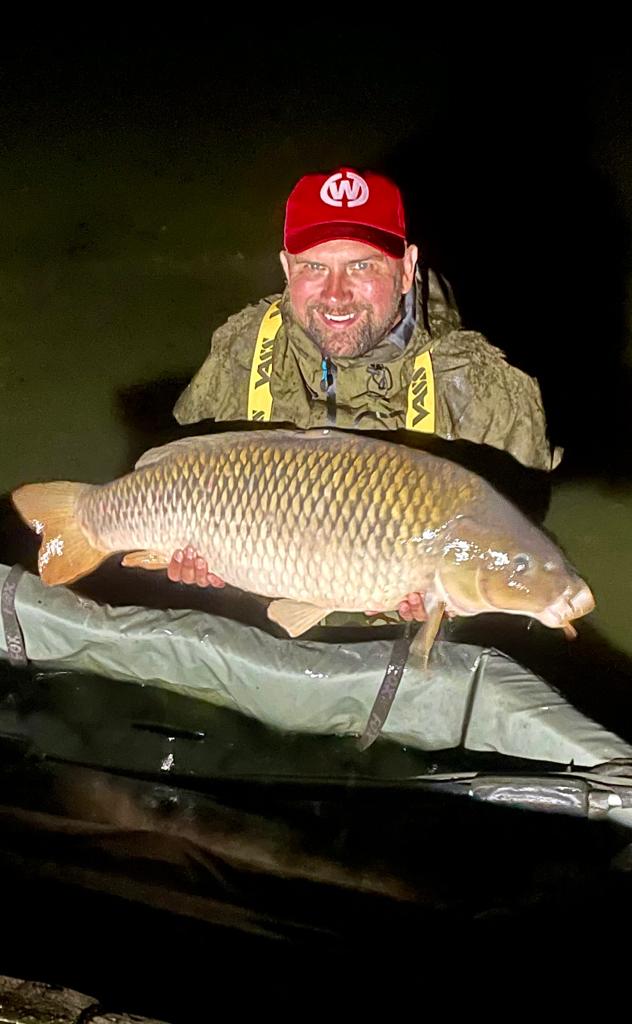 A brilliant holiday on all fronts

The guys had a super week, the ladies went off on their adventures every day, sampling the many pleasures of the area and everyone had massive smiles on their faces by the time we had to say good-bye!

PS: No catch report next week as we have non-fishing guests this week.

Dishwasher, general waste bin next to the recycling bins

A great week's fishing on the lovely lake at Beausoleil. Great owners and Matt was so knowledgeable on where, when and the tactics to use to catch their beautiful creatures. Every fish caught was in mint condition, topped off by Mr Angry at over 50lbs, a fish of a lifetime and one for the memory bank. As the water was low, take your waders to ensure safe and quick handling and release in the water. The tuition was second to none and very informative, highly recommended. The ladies enjoyed the visiting of the local area and commented on the friendliness of the locals, the historic towns and quality of the food. Highly recommended.
Share this - 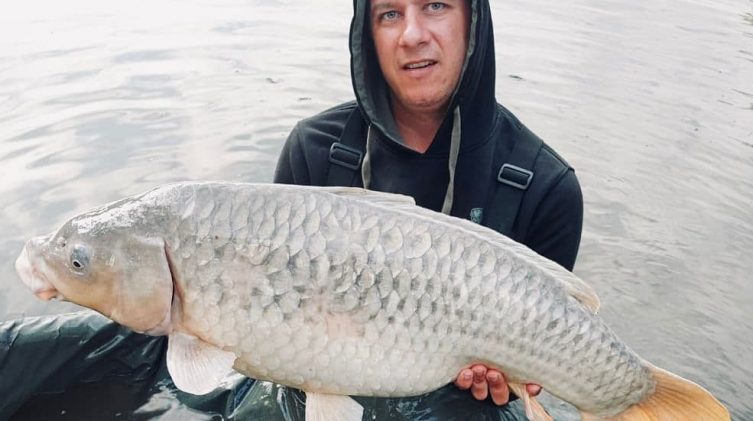