One of the best 2022 sessions by one angler with 4 x 40s, loads of thirties and a few stunning home growns thrown in for good measure!

This week we welcomed Nik & Jo to the venue for their 3rd visit. Covid scuppered a number of attempts they made to return so it was wonderful to see them both again. Nik is a top angler and has caught some large carp from some tricky venues in his time. He loves early and late season and he’s always done rather well and this year was no exception. In fact I reckon it’s his best result ever! 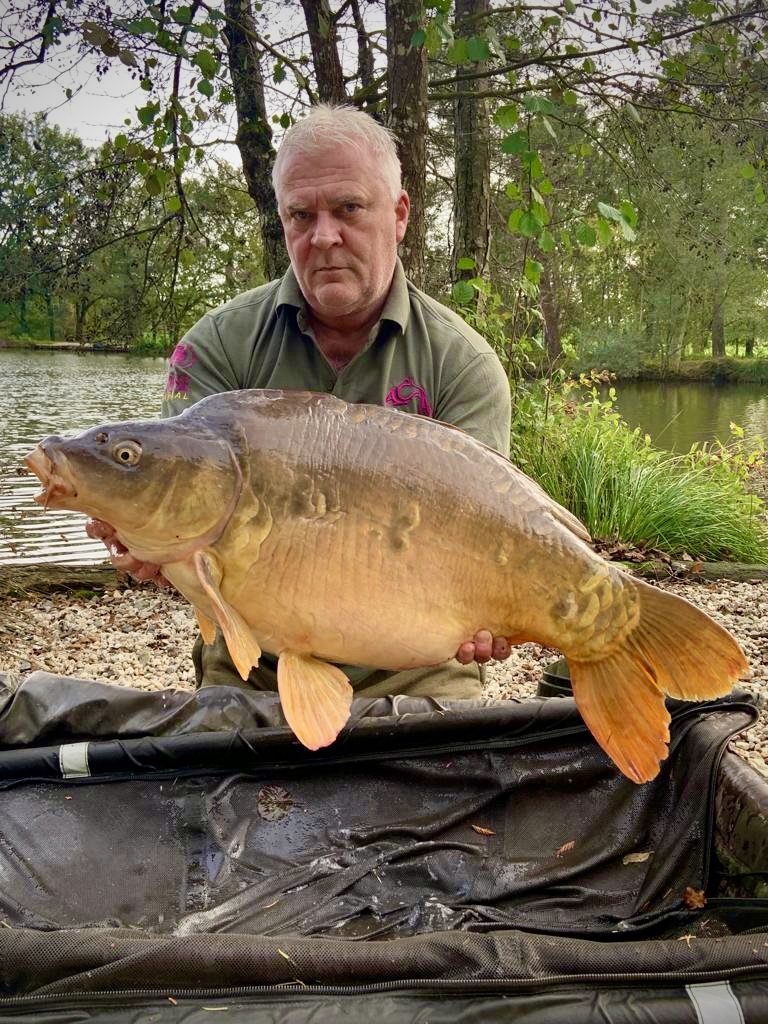 Jo’s not into fishing but she absolutely loves the place. The peace, tranquillity, beauty and wildlife are hard to match and as long as Nik takes her on a couple of trips out, she’s a very happy lady.

It’s been a few years since we’d seen Nik but we chat pretty regularly and he’s always up to speed on what’s going on. He’s his own man when it comes to angling but there are a number of key similarities to our methods. Not that he’s averse to adapting or changing things if it’s not working.

Nik has really helped me understand what matters and what doesn’t when it comes to carp fishing and I’ve certainly picked some very interesting insights into the sport. At the same time, he’s incorporated a few of my tricks into his fishing so it’s very much a win-win situation. At the end of the day if you have the fundamentals nailed down, I believe there’s a fair degree of latitude as to what will work but it’s so easy to get lost in the maze. One of Nik’s favourite lines is: ”It’s not complicated Matt”. He’s right of course, it’s not (if you are as good as him) but there are many thousands of ways of getting it wrong! 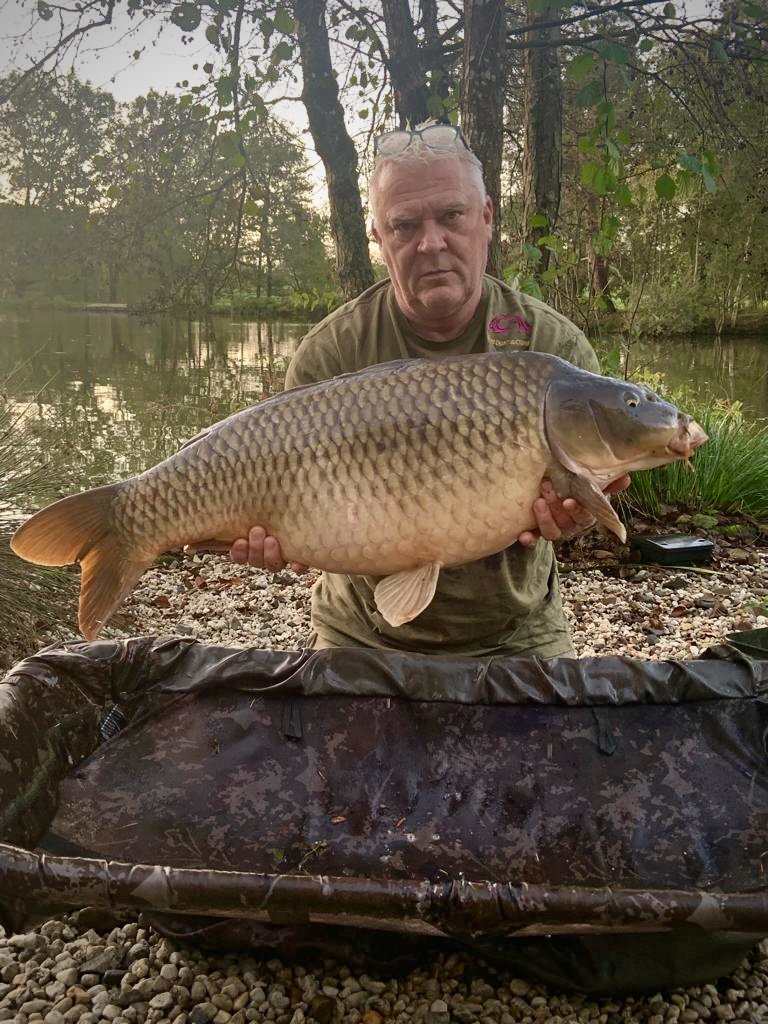 The four of us had lunch together on Tuesday which was super lovely. When we arrived, all we knew was that Nik had had a scaly low twenty. I might have known he was holding back on me though… In fact, by Tuesday he’d racked up an impressive tally of 7 carp including 1 x 40, a home grown and the rest were mid to low thirties. Yeah not bad mate 😂 We had a lot of catching up to do and I was determined not to spoil the wonderful lunch by pumping him for info as to how he was doing it (that could wait a bit!)

At one point Nik had 10 different spots on the go. Each spot is topped up daily with a very small amount of bait to simulate a drop from a bait boat hopper. He might only use 6 boilies per spot and maybe some particles but it’s really not much bait at all. Across those 10 spots, he juggles 4 rods as it’s only him fishing. Every rod has a different bait and after a bite he’ll move spots and change baits. In his bivvy you’ll find a huge range of different hookbaits, and flavours.

Rigs are very simple. Nik favours a wide gape knotless knot without a kicker which is virtually identical to the original Beausoleil rig. Hooks are hand sharpened to a high level which is exactly what I used to do when I used the wide gape pattern. Leads are small inlines (1.5oz to 2oz) and are fished in the super light semi fixed style that has done so well here and of course, he uses a ‘tell tail’ (he didn’t learn this from me!). Initially he wasn’t using back leads but added some light ones mid way through. None of the above is rocket science but there’s a lot of effort that goes into every tiny detail of his approach and it’s repeated religiously time after time. Simple really 😊 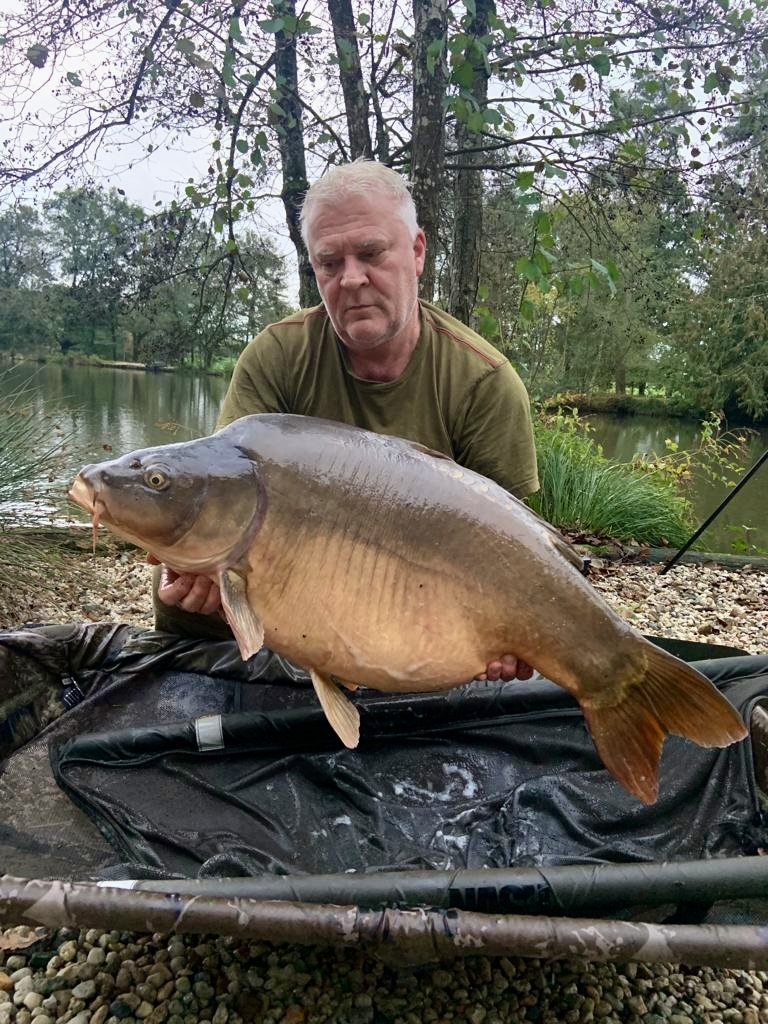 Nik isn’t keen on catfish so he uses plenty of tiny particles in his mix with very few boilies and absolutely no pellets. This ‘bite a time’ approach is very robust and the perfect choice in the autumn. The fine grain particles will keep the carp grubbing around just long enough to get it wrong and then it’s game on.

He did hook and land one of our monster catfish but released it straight back to its lair. He’s had cats to 114lbs before at our venue and he guessed this one to be around the three figure mark. 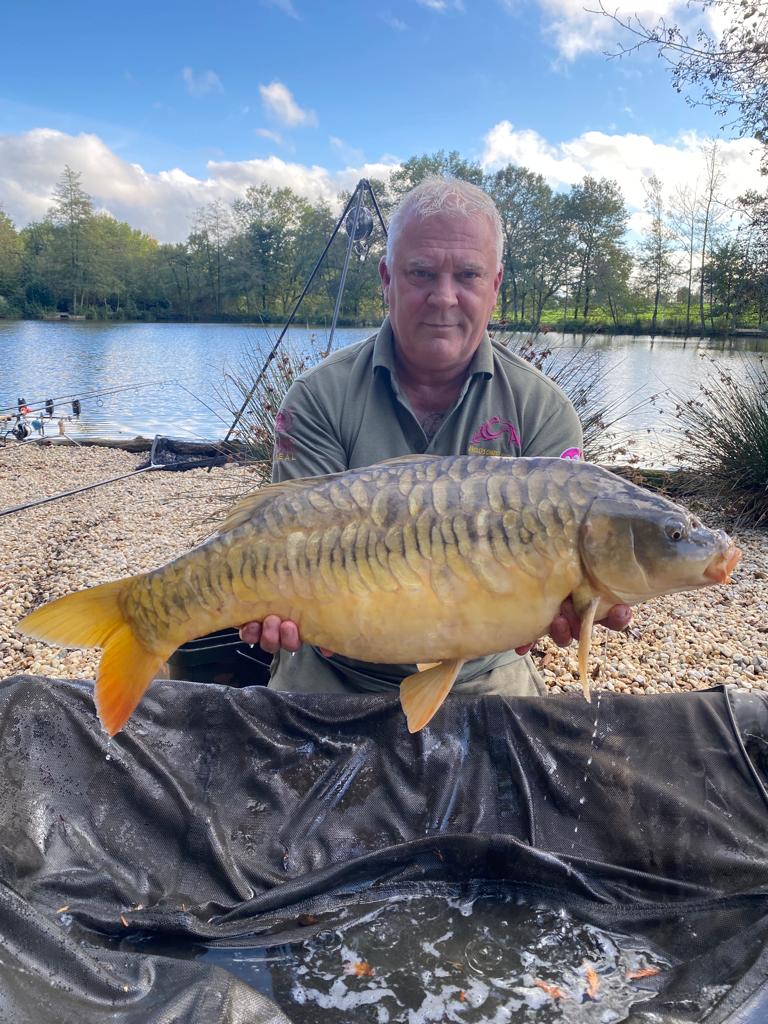 When we met Nik on Friday he’d been suspiciously quiet. This normally means that he’s been busy hauling and surprise surprise, he’d had 8 more carp!

On Thursday afternoon he banked 3 x 40s in four hours. I’m not sure a solo angler has had 3 x 40’s in a week (although I might be wrong), let alone 3 in 4 hours! All carp came from the same spot. He normally moves the rod after every take but they were really getting into it down there with sheets of fizz and clouding on the water so it made perfect sense to stick with it. Nik’s never afraid to move rods if he can sense a better opportunity elsewhere. Yet again, it was an awesome piece of angling which is why we rank him as one of the very best anglers we’ve ever met. 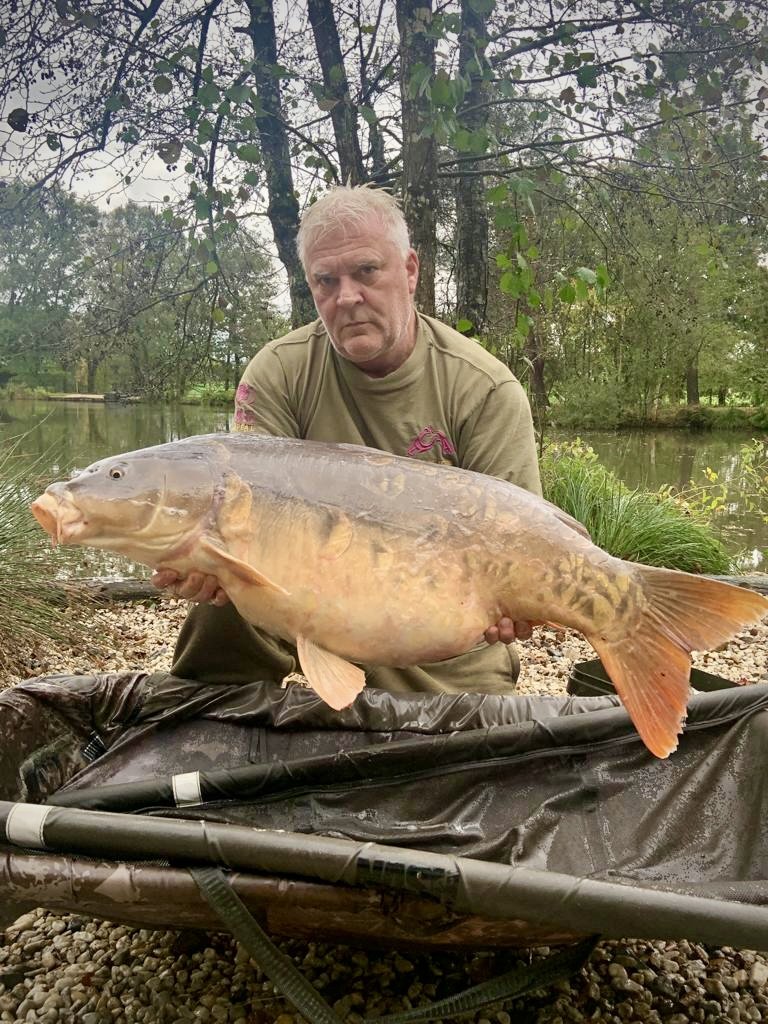 Going out with a bang

After a tricky year with some very tough fishing during the hottest months, it was one hell of a way to finish the season. We are now closed for the year and the next available date for 2023 is the 18th of March. After that we are fully booked until the 30th of September with quite a few anglers hoping for a cancellation. If you are serious about returning to the venue, or visiting us for the first time, then do check out the 2024 calendar as multiple weeks have gone already.

Looking after our little fishing paradise

We are draining down and netting this winter. We are planning to do a regular update of the drain down so keep an eye on our Youtube channel for a series dedicated to this fun activity.

Mild, some wind and rain.

No, everything you need is here.

As a great holiday. Great to see you both. 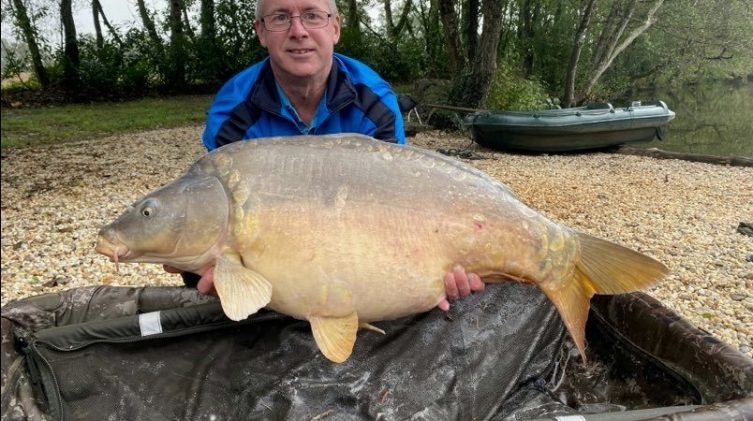