Number of the week: 3️⃣5️⃣

There are many things that stand out from this week’s Beausoleil catch report. I’m going to talk about the new lake record catfish, the great number of 35lbs+ carp that have come out, the mint commons, Wayne’s stratospheric start and Nick’s blinding finish. There’s enough material to cover a month of fishing let alone one week!

I’m just going to give you one number that stands out for me: 35. That’s not a fish weight or the number of fish caught. That’s the number of hooks Nick used for the week. After their tuition session, both Nick and Wayne applied the “Beausoleil” method to the letter but they were particularly religious about their hooks. Nick used 35 in total, changing them after not only each fish but sometimes after a cast or a retrieve, when it was required. That may sound mad but that’s the difference here between a good week’s fishing and an amazing week’s fishing. So, let’s go through how the magic happened.

This week we welcomed back Wayne and Kim to the venue along with Wayne’s friend Nick. Wayne and Nick have fished together for years and are both super keen carp anglers and Nick was very excited to get the chance to fish the venue after Wayne’s first visit.

Despite the fact that Wayne had already done the tuition with me 2 years ago, Wayne & Nick booked the session again so that Nick could get the maximum benefit from the experience. Wayne was already very well prepared from last time as was Nick so I was able to fly through the technical portion of the session. There was still plenty of ground to cover though and I’d added some new tricks over the last couple of years. The guys both loved a new trick multi rig I’ve created. Both guys absolutely loved the session and they wasted no time putting their plan into action catching soon after we finished.

I’ve always said there’s no luck in fishing but I reckon Wayne must have stepped in something very special on his way to see us. We’d spent time during the tuition on my new catfish rig that I’ve developed. It’s nothing revolutionary and if you’d like to know more, just head on over to YouTube. I demonstrated the rig to the guys and they liked it so we tied up a few for the session. Hours later, for his very first take, Wayne hooks into an absolute beast of a catfish.

Luckily Kim’s used to mucking in because this fish was so massive, it took all three of them to haul it out the water. The first attempt to weigh it didn’t go to plan. How many times in your life are you going to bottom out a set of 120lbs Reubens! Luckily Wayne had a plan and we have two sets of Reubens so it was possible to weigh it with two sets of scales supporting the fish’s weight. As both the scales were set to zero it’s just a matter of totalling both then subtracting the weight of the sling. They settled on a conservative 134lbs which is just bonkers!

Wayne saved the rig that did the business for him and I could see minimal damage to the 35lbs Armourlink hooklink. The size 4 Nash chod Twister was absolutely fine too. That’s testament to the quality of these products and why it’s all we use and recommend for the venue. In fact I only stock the size 6’s because they are that strong. Well done mate for being so well prepared from the very start of your session, it was worth it, you are now a Beausoleil lake record holder 🏆 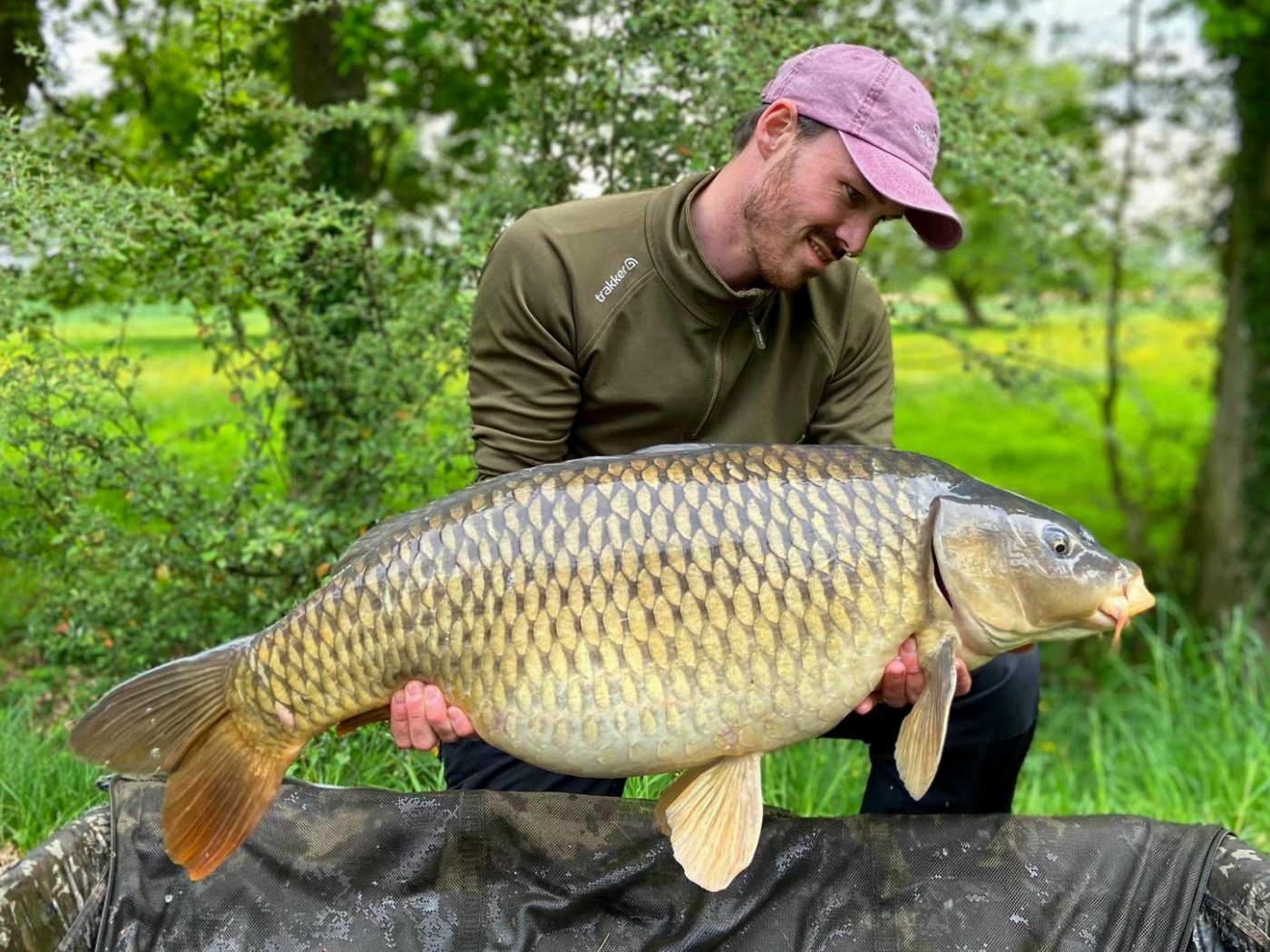 The other end of the scale

Following Wayne’s monster, Nick managed to get off the mark with one of the smallest specimens in the lake in the form of a 17lb common. These homegrown specials won’t break any records for a while but they are absolute minters and the future of the fishery. Alfter slipping that one back Nick didn’t have to wait too long to bank something a bit more special in the shape of another mint 30lb common. That’s more like it!

Over the following days, Wayne went on what can only be described as a carp catching rampage. The rate at which he caught carp and the average size was just crazy. I’m only going to talk about the heavy hitters here. I’ll gloss over the other carp he banked! First up from the ‘A’ List was Pepe at 45lbs 15oz. He looked absolutely mint as usual. Then he had Hyphen at 43lbs… twice! Hyphen does tend to trip up more regularly than most of our carp so there’s nothing unusual about a double capture really. The next big carp was Scalpel at 38lbs along with Audrey at 35lbs and Dink at 37lbs. He then banked Magnum at 45lbs 5oz so that’s 4 x 40’s by Tuesday. It’s extremely rare for an angler to bank 2 x 40s in a week let alone 4 in two days. It was an incredible bit of angling. After that Wayne took his foot off the gas and ‘coasted’ for the rest of the session. He was catching at will and that’s not something that many anglers are able to achieve here. 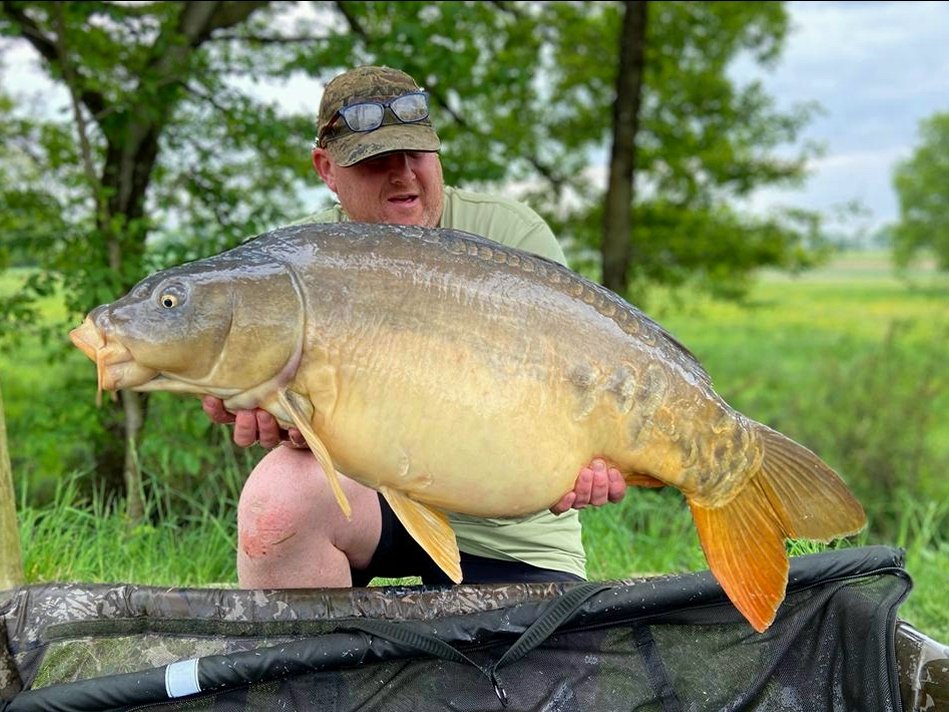 This week, the guys used Scopex Squid carp food and catfish food packs. The catfish was caught on one of my catfish rigs fished with 2 x 24mm Scopex Squid presented over a big bed of catfish pellets. All the carp fell to my new multi rig. The guys added their own twist and fished an 18mm Scopex with either a 12 mm or 15mm popup on top (various flavours and colours used). In total they got through about 90kg of boilies and pellets. That might sound like a lot but these fish can smash through that at this time of year without any issue whatsoever and still be hungry for more!

The master of mobility

Wayne offered up his swim to Nick but he wasn’t interested in catching off someone else’s patch so he worked the rest of the lake. After working the Island point swim, Nick moved around to the Point swims which enabled him to cover a lot of water that Wayne couldn’t access. By Wednesday, Nick was on 5 and had banked multiple 30s so he was a happy boy. TBH Nick’s score would have been excellent on any other week! I spent a bit of extra time with Nick to show him some additional features that we’d skipped over on Sunday. This saved him at least half a day’s boat work and the next morning he’d upped his PB again with the mighty Planets at 37lbs 7oz.

Not content to settle for an easy week’s fishing, Nick’s high work rate continued. As the fish moved from one side of the island to the other, he continued the hunt catching from one side and then the other. In total he moved no less than 7 times. I’ve done it myself (many years ago) but it’s proper hard graft.

On the last day, Nick fished three different swims, catching from all of them. He had a virtual triple take of three carp in 15 minutes. Then went round the other side of the island and banged out two more upper 30’s just hours before they were due to leave. It was already a good week’s fishing but this was just nuts!

Amazing angling mate, you really worked for each bite, that was a very special session. 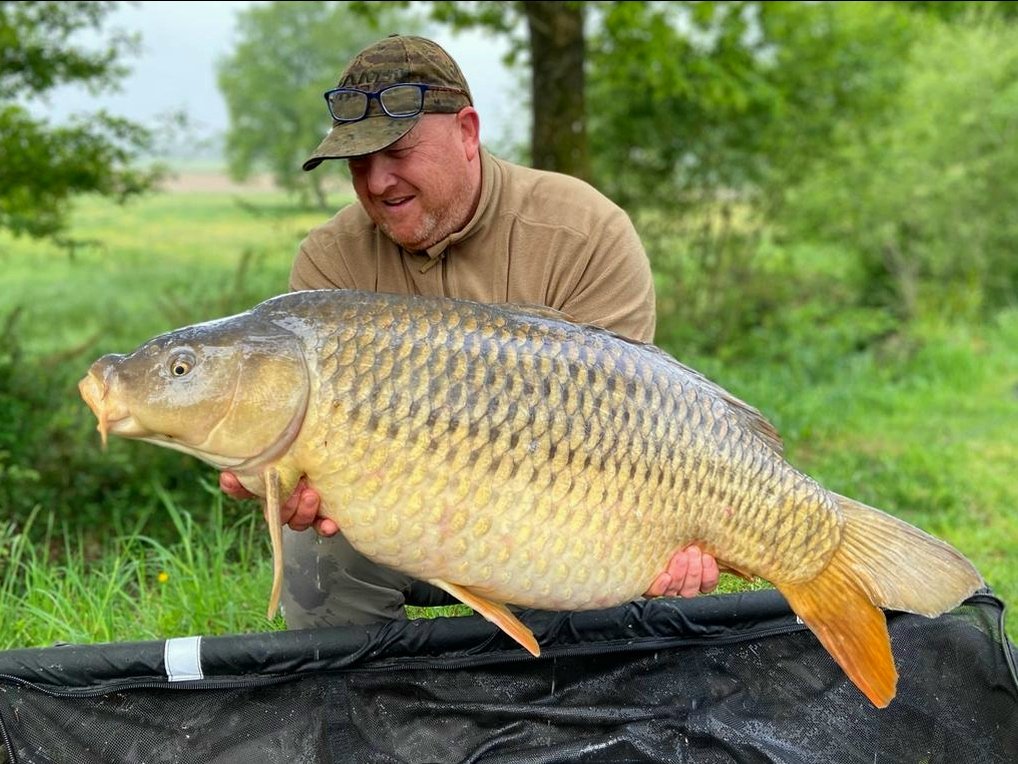 So what’s going on at Beausoleil?

Anyone new to our website and reading this catch report might be forgiven for thinking Beausoleil is a runs water. I cannot emphasise this enough: it is not and never will be. We’ve been tracking these fish for 10+ years. The carp make a mistake 2 to 3 times per year on average. There is definitely a specific set of techniques, gear and skills required to catch consistently here, and that’s where the tuition comes in. If you’ve got those, and the stars align, and you work your nuts off, you can have a very very very good week’s fishing indeed.

Congratulations guys, you earned every single bite and it was an absolute pleasure to be a part of your journey. And a very special mention to Kim who walked miles to look after the boys all week and who was there photographing every fish (day or night), even on the very last night when she was rudely awakened multiple times by Nick! That is a very special friend indeed. Kim, you are our hero of the week 🧡

Latest video
#carpfishingexplained
Do you want to stop carrying 3 rods each time you go out? I got the idea for this setup from a guest last year who was using the double loop trick which made popping his spod on and off really easy. Thanks Mick 😉

Sunny, cloudy and a few light showers, just what you would expect for this time of year

Nothing, we had a fabulous time

Yes, in a heartbeat

Thank you for letting us use your home. It was Wayne's and mine second visit and Nick's first visit. The holiday has been amazing with fantastic fishing.
Share this - 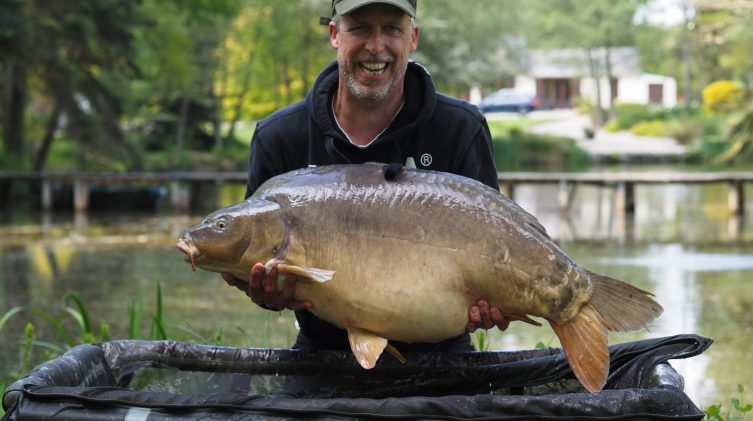 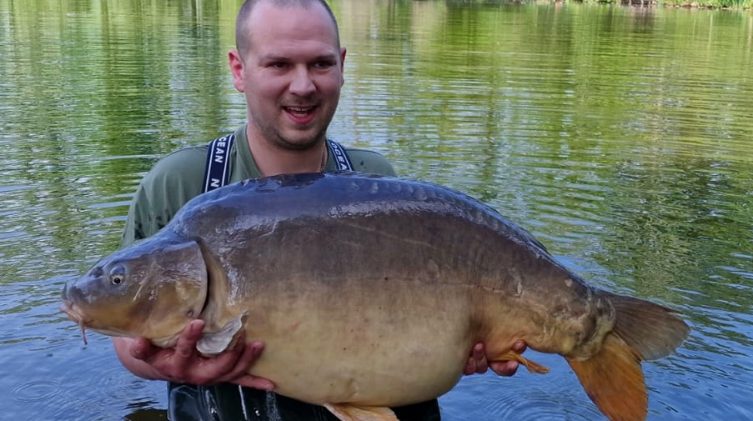