When you’re carp fishing, one of the challenges you come across is telling the difference between a big liner and an dropped run.

You know the sort of thing: there you are, patiently waiting for a carp to pick up your bait, and all of a sudden you get a flurry of beeps or maybe even the tip starts to nod and you think you’re in! You’re sure the lead has moved and rushing to the rod you enthusiastically strike into what you expect to be a great big carp but actually turns out to be fresh air. You wind in frantically hoping to make contact with the beast but to no avail, there is nothing at the end of your line, apart from a few leaves perhaps. Cursing, you inspect the rig, inspect the hook and wonder what happened. Have you just been done? Wouldn’t it be nice to know what happened, to be able to ask the lead what’s gone on? Did it see a big carp? Or was it just sitting there minding its own business when it was unceremoniously dragged across the lake bed by some unseen force tugging on the mainline.

Well recently I’ve come up with the ultimate lead set up that helps you find out exactly what happened. Here it is on video:

Ultimate lead set up on a knotless knot hair rig

For some time it’s been widely accepted that a piece of silicon tube sliding over the shank of the hook and capturing the hair can be used as a telltale sign to indicate whether or not a carp has blown out the bait. Now that’s all well and good, I’ve tried it but I’ve moved on. I’m very happy with the performance of my Beausoleil knotless knot hair rig and I don’t want to change the way it works by adding a piece of silicon tube into the equation. 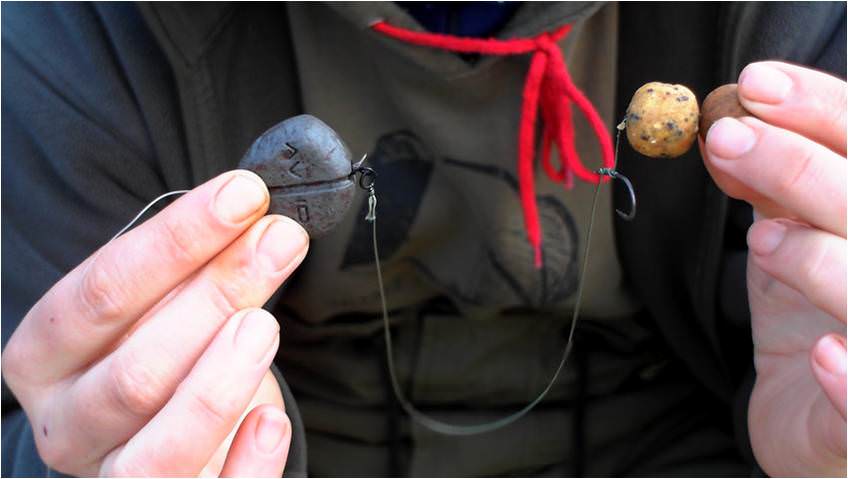 With my rig, as soon as the carp picks up the lead, shakes its head or moves off, the lead will fall off the silicon tube, slide down the line and become a running rig, thus preventing the carp from using the lead to swing out the hook and giving you good bite indication no matter which way it swims. 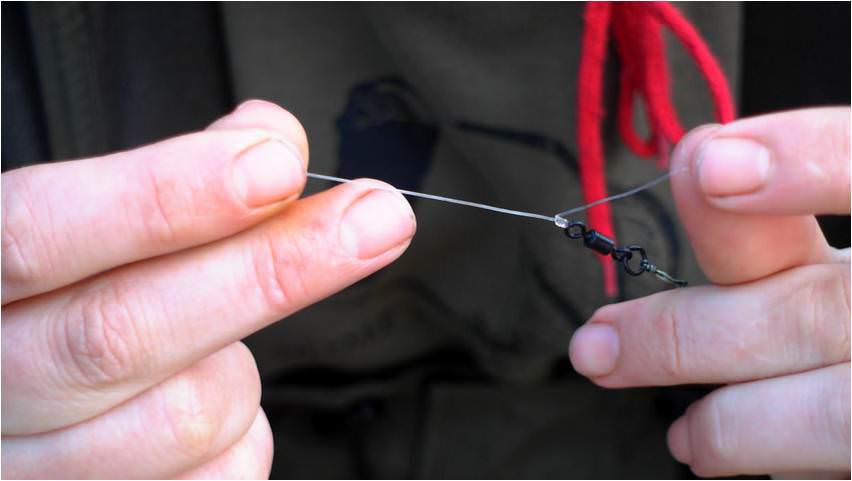 So what I started doing recently is leaving the tail that is left after I’ve tied the 5 turn double knot about 30-40mm long.

I then slide the silicon tube over the end of the eye of the swivel which pushes the tail forwards towards the swivel. 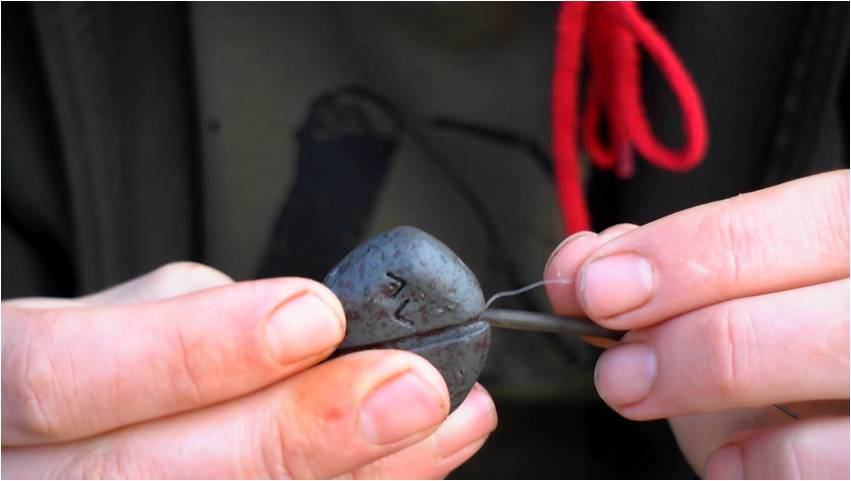 Once I’m all set and ready to go, I slide back the lead off the silicon tube onto the mainline. Then I take the long knot tail and poke it into the hole in the middle of the inline lead where the insert used to be. 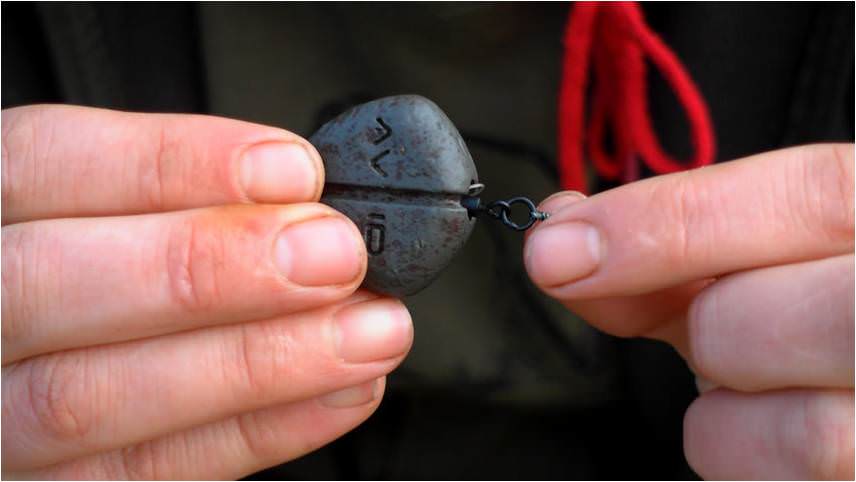 Holding the tail against the silicon tube, I gently slide the lead back down over both the tail and silicon tube to trap the tail. I only do this hard enough so that the lead just grips the tube when held by the baits. This is how the rig will then fish, tail trapped ready for action. If a fish picks up the bait, shakes its head or moves off, the lead slides off.

Now in this example, say that your hook wasn’t sharp enough or the fish was only just nicked and the carp gets away with. Laughing at you, he swims off free from the hassle of having to look you in the eye while you photograph him! A few seconds later, you strike into fresh air, reel in and inspect the lead. If the tail is exposed as shown then you’ve been done as the fish has pulled from the hook end: 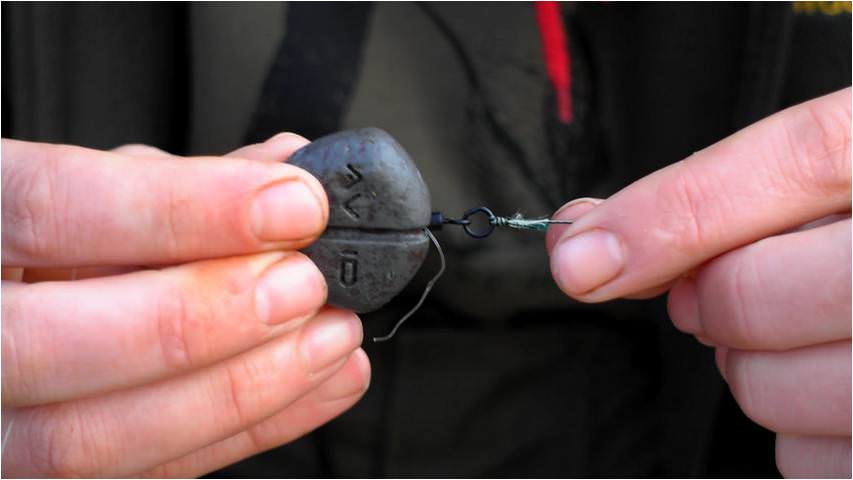 What’s happened is this: the fish picks up the rig and shakes his head. This pulls the silicon sleeve out of the lead and the telltale tail pops out. In this example the fish was not sufficiently well pricked and swims away. When you strike, the lead slides back, the tail stays locked out from the lead and points towards the swivel. So, unfortunately, you’ve been done, but at least you can be virtually 100% sure.

Knowing it was just a big liner

So in the next example, let’s say a large carp, sturgeon or a large catfish picks up one of your lines with its pecs and gives you a spectacular mini take. The lead gets dragged sideways over the gravel because it’s being pulled by the mainline. The lead does not lose contact with the silicon tube pushed over the swivel because it’s being pulled onto it. You hit what you believe to be a genuine take only to feel no resistance. You wind in, inspect the lead and the telltale tail is still neatly tucked into the lead. Now you know that it was just a big liner, you’ve still got to redo the rod but you would have wanted to do that anyway after the lead and rig (especially the hook) have been dragged over the bottom. The important thing is you know exactly what happened by looking at the status of the tell tale tail in the lead.

Why knowing the difference is important

Knowing is one thing, understanding is another. It’s what you do with the knowledge that’s important.

Now, no matter how much attention to detail we pay, from time to time these things happen:

As long as I’m confident that the size of the bait and hook is suitably matched with the size of the fish I’m fishing for and that the hook is as sharp as possible, then there’s not more that can be done. Everyone gets done, it’s not something that keeps me awake at night. If you use this system and find that you get done a lot then perhaps you do have a rig problem.

Liners happen, what’s important is that you know there is nothing wrong with the rig! Maybe you are fishing too far out, maybe you were spot-on and your rig was yanked out from under the nose of a big carp! Get the rig back out there and don’t worry about it.

Give it a try next time you’re out and remember: the lead never lies! 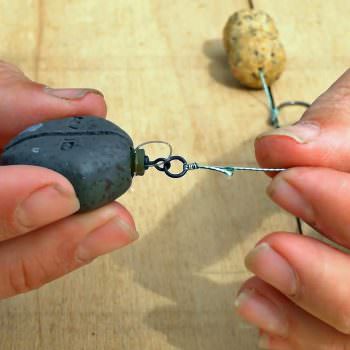 How to sharpen your carp hooks & reduce hook pulls 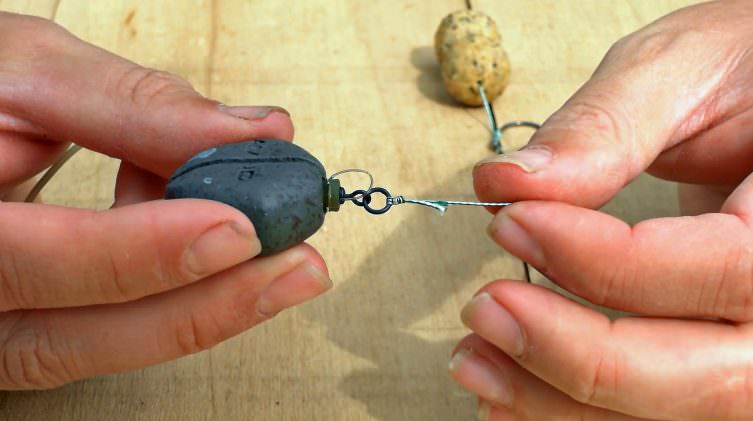 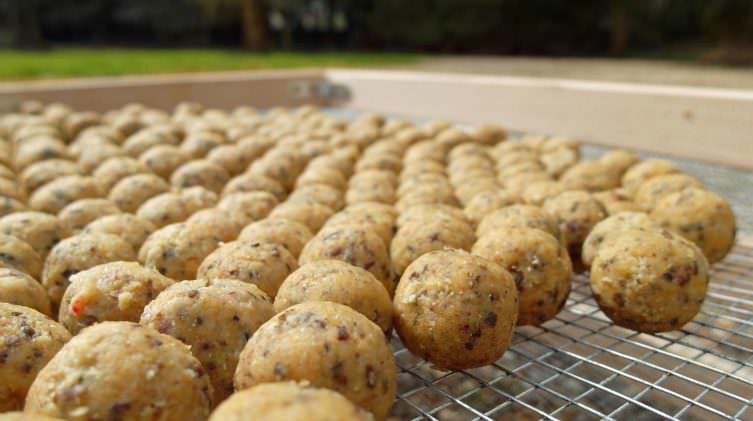